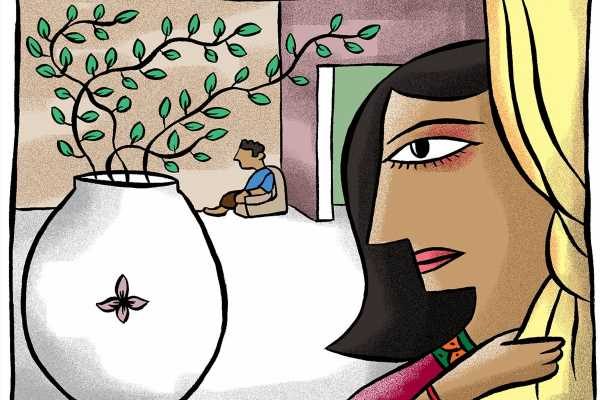 Meet Love Guru, who says, ‘I’ve been told I give some pretty great advice. And some people think I’m funny, so if I can give you a laugh or two after your girlfriend stuck a fork in your face, why the hell not?’

So if you feel you want some personal advice, do write in to [email protected] (Subject: Ask Love Guru).

If you wish to remain anonymous, do let us know and your name won’t be disclosed when publishing responses to your queries.

I have been married for 2 years but I don’t feel close to my husband.
It was a marriage arranged by my relatives and despite trying I don’t feel any love for him.
Now I am in love with his younger brother. He loves me too but is afraid to tell his brother. He feels it is wrong and it will break his family.  What should I do? Is it my fault?

It’s not your fault that you’ve fallen in love; people can’t always help the way they feel about someone else.

But it’s not fair to your husband that you don’t love him and before things get worse, like maybe you becoming pregnant, I would suggest you end the marriage soon.

As for your relationship with the brother, that should not coincide with things in any way.

If, after you’re divorced, you both decide to ease into being a couple over the course of time and see where it goes, that in itself will be a challenge for your respective families.

So take one step at a time, slowly and discreetly. Because leaving him for his brother will cause trauma anyway. Waiting it out will help the situation immensely.

My friend likes a guy in her office who is senior to her. She has a major crush on him but whenever she sees him around, she goes weak and is unable to utter a word. He is tall, dark and handsome and I have discovered that he is engaged too. I tried telling this to my friend but she still feels for him.
How do I help her?

She should do her best to get over him.

He is her senior, they share the same office space and he is committed to someone else. Her expressing her feelings is unlikely to cause anything but awkwardness at work.

If she wants to put both her personal life and her career on the line by expressing her feelings, then that is her choice. But like I said, in her place I’d avoid it.

A few months ago, I broke up with my boyfriend of 10 years and I am about to get married in December. It was his decision to break up because he had found someone else. A few days ago, he tried to commit suicide because he realised he loves me truly. He knows that I am engaged and will move to another city soon which is difficult for him because we are also best friends. While speaking to a common friend, I realised that he has been trying to contact me but since I had blocked him he couldn’t get through to me. He had even come to meet me at work but I was unavailable. I feel terribly guilty. What should I do?

Guilt is not reason enough to go back to an ex, especially one who dumped you for someone else.

If, on the other hand you love him, that’s another situation altogether, but you haven’t specified that you do.

It may just be that he wants you back because you have now committed to another man?

You need to figure out what you want and who you want. Do you want to give him another chance? How likely is he to break your heart again?

And, on a separate note, I think you’re rushing into marriage by December. You haven’t given yourself any time to breathe after a decade-long relationship. Why?

Don’t marry on the rebound; that will be a terrible mistake, even if you’re not going back to your previous boyfriend.

Figure out whether you want to make contact with him first and why. Then take things forward.

Dear Love Guru,
I was in a serious relationship with a senior student during my college days. We broke off due to his overtly flirtatious nature with other girls.
This was my first relationship and pained me a lot when it ended abruptly.
Fast forward, the company I just joined has the same guy working in a senior position. He is married now and from what I know has a kid too.
I shrugged off the past and graciously met him within our professional boundaries, but he started hitting on me with mushy comments about my appearance.
The other day, I received a text from him asking me to go out for dinner with him.
His behaviour is really affecting my mental and emotional state. How do I tackle this situation?

Tell him to back off. In no uncertain terms.

Let him know you are not interested in anything besides a professional relationship with him.

And if you feel like you’re up against a wall, you have one of two options; inform the HR about his unwelcome advances, because they constitute sexual harassment in the workplace or just apply elsewhere and move to another company.

I am in a live-in relationship with my girlfriend for five years. I am 28, she is 23.
As a typical nature of this arrangement, all our house chores, expenses, and responsibilities are divided between us. But three months ago, she quit her job citing ‘work burnout’ issues. Since then, I am under the onus to keep the home running. Whenever I try to talk about the issue, she starts playing the victim card. “If I were your wife, wouldn’t you have done same things for me” – is her response of late. Things are getting quite weird between us. I feel kinda stuck, but I am also used to being with her. What is the solution here?

It’s clear she doesn’t want to work any more; at least for the moment.

Now, whether or not you would react in the same way if the two of you were married isn’t the question here. Explain that you are feeling the strain of running the house alone and would like her to pitch in. That is the same that an overburdened husband would ask of his wife too, isn’t it?

Taking a hiatus from work is one thing, but if she intends to stay at home permanently then you need to discuss it.

If you’re okay with shouldering the financial responsibilities, maybe she can take over running the household and chores to ease your load.

Remember, stay in a relationship because you want the other person around, not because it’s become a habit.

This column is not for the psychologically disturbed, or those who need professional help for severe mental trauma. It’s for those who can’t discuss their issues freely with parents, or friends or partner. Or dog. Or just want a fresh perspective from an unbiased, objective-thinking individual.

Maybe your partner is the problem? Or maybe you are the problem and just don’t know it. And need Rediff.com‘s Love Guru to tell you just that.

So if you feel you want some personal advice, do write in to [email protected] (Subject: Ask Love Guru).

If you wish to remain anonymous, do let us know and your name won’t be disclosed when publishing responses to your queries.

The questions and answers in this advisory are published to help the individual asking the question as well the large number of readers who read the same.

While we value our readers’ requests for privacy and avoid using their actual names along with the question whenever a request is made, we regret that no question will be answered personally on e-mail.

Please note: All content and media herein is written and published online for informational purposes only. It is not a substitute for professional advice. It should not be relied on as your only source for advice.

If you choose to rely on any information provided herein, you do so solely at your own risk.

Opinions expressed herein cannot necessarily provide advice to fit the exact specifics of the issues of the person requesting advice.