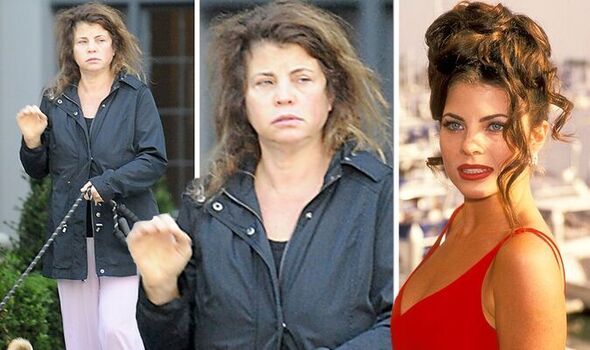 The 54-year-old stepped out in a black jacket, pink pyjama pants and slippers last week in Los Angeles. Her relaxed appearance is a far cry from her days as a sizzling lifeguard on the popular series Baywatch.

Yasmine Bleeth maintained a low-key appearance as she was seen taking a quiet stroll near her home.

This is the first time she has been seen out and about in over two years since the Hollywood star quit her acting career.

The former model played the glamorous lifeguard on 72 episodes of the hit show Baywatch, which made her and her co-stars household names, including Pamela Anderson, David Hasselhoff, Carmen Elektra, Nicole Eggert and Michael Newman.

The TV star appeared to be a bit groggy as she walked alongside her dog.

Yasmine Bleeth opted to go make-up free for her outing

The former Baywatch star stepped out to walk her dog and it was said to be the first time she has been seen out in public for the first time in over two years. Yasmine opted for a pair of pink pyjama pants which she teamed with slippers.

The actress rose to fame in the 90s and worked alongside famous faces including Pamela Anderson, David Hasselhoff, Carmen Elektra, Nicole Eggert and Michael Newman.

Yasmine Bleeth’s been lowkey since quitting acting two decades ago