Britney Spears said she has been a “caged animal” for “half” of her life during her latest Instagram spree.

The 39-year-old musician shared a video clip of herself dancing and modeling a sheer cheetah-print jumpsuit – which was paired with a matching black bra and underwear set – as well as a shiny, green low-cut jumpsuit. The singer also shared that she was dancing to a song that hadn’t “been released” as a single.

“Just a little insight …this is definitely me experimenting with what I can do … you know a home studio with no lights and a four year old phone!!! I made this video in a two hours … edited all of it … I know some videos can be made in a day or two … pulling all nighters and then some movies talk almost a year !!! Phone Booth was made in 10 days … HOLY CRAP,” Spears captioned the video in part on Wednesday.

“do I know the challenge in waiting around during a shoot … I feel like I have been a caged animal for half of my life …that’s exactly why I choose to direct myself … do my makeup myself … produce myself … dress myself … make music myself … feed myself … and shoot videos and pics myself,” she added. 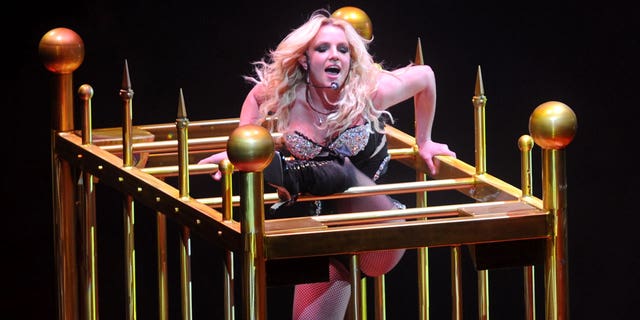 Spears has made similar remarks in the past as she has battled her father Jamie Spears for control of her life. Jamie has been in control of Spears’ finances since 2009 after the “Toxic” singer underwent a series of involuntary holds.

“So I said ‘life goes on’ in one of my recent posts but it’s always easier said than done !!!!!” Spears captioned a graphic.

“In that moment that’s what felt was the easiest to say but I think we all know that I will never be able to let go and fully move on until I’ve said all I needed to say … and I’m not even close !!!! I was told to stay quiet about things for so long and I finally feel like I’m just getting here.”

In Wednesday’s Instagram spree, Spears also revealed she’s “thinking about directing a movie similar to KILL BILL.” Spears said it was because yellow has “always been” her “favorite color.”

She continued: “Well what do you expect from a woman whose hands are smaller than a 12-year-old’s ??? Pss I’ve been holding onto this for a while because it’s one of the first times I’ve shared my music.”

In a separate post, Spears also jokingly revealed she had a “baby.” The pop star danced and showed off a baby doll in the video.

“I had a baby y’all,” Spears wrote. “I will be taking some time off shooting at home every day !!! Her nursery is beautiful and her name is Brennan … we even look alike.”

“I’m turning 40 this year … age is nothing but a number but seriously … growing up is the dumbest thing you’ll ever do so PLAY ON MY FRIENDS !!!” she added.