CHRISTOPHER STEVENS reviews last night’s TV: The moral of the story is… never ignore a lion with toothache!

The Secret Life Of The Zoo: Underwater Special

Once upon a time, every schoolboy was thrilled by the true story of the Man-Eating Lions of Tsavo — two vicious animals driven insane by their desire to gorge on human flesh.

During the construction of the Kenya-Uganda railway in 1898, a pair of rogue males began snatching workers from their tents at night. Soon, the big cats grew so bold that they would stroll into the camp together and pick their victims at will, dragging men screaming into the night.

According to one estimate, the lions killed 135 people before they were shot dead by a professional hunter. Today, their stuffed skins are on display at Chicago’s museum of natural history.

The grisly legend still matters, because a couple of years ago scientists examined their jaws, and concluded the cats suffered from tooth decay. 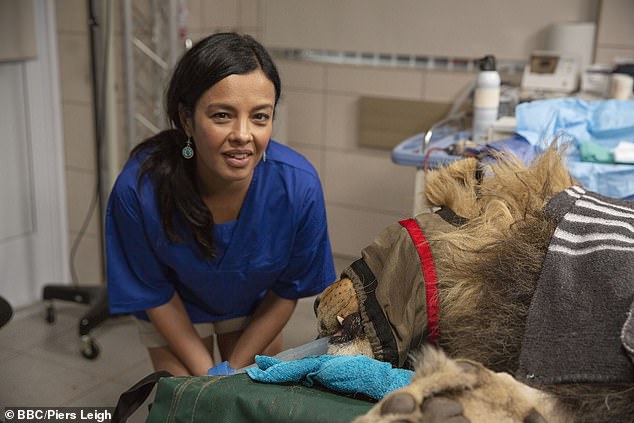 The reason they killed and ate humans was because we’re easier to chew than a tough old wildebeest. The moral of the tale is: never ignore a lion with toothache.

Naturalist Liz Bonnin watched a vet doing root canal work on a lion called Ricci at a South African sanctuary, on Big Animal Surgery (BBC2). The pooGlorious mess of the night:r creature had been rescued from Romania, where it was kept as a pet in the back yard until it was a year old, and its teeth looked like broken piano keys.

Liz and her crew set up fixed-rig cameras across the operating theatre, but big cat dentistry isn’t much of a spectacle. At one stage Ricci started to wake up, which could have been awkward, but another knockout dose soon settled him down.

Though animal ops are a perennial TV favourite, the popularity of shows such as The Supervet is largely due to the owners, not the pets.

We’re desperate to see the operations succeed because we know how important each animal is to a family’s life. But there wasn’t the same sense of connection to Ricci, a wild creature that had endured a wretched early existence and was now doomed to life in captivity.

Glorious mess of the night:

What with secret messages tied to ravens’ legs and murders aboard luxury yachts, Riviera (Sky Atlantic) is like Harry Potter meets Dynasty, via The French Connection. It’s dripping with gorgeous locations, though.

Liz supplied an interesting digression on why lions roar instead of meowing (muscles pull the larynx down into their deep chests), but this show didn’t grip the emotions.

A more amazing medical procedure was performed on The Secret Life Of The Zoo: Underwater Special (C4) when an elderly blind cave fish called Tiny Tim was injected with aquatic Viagra.

Tim and his five girlfriends had been living together in celibate harmony for 30 years, and the zookeepers were fed up with waiting for them to get frisky. Each one was caught in a net, slapped on a set of scales (usually a very bad moment for any fish) and given a sex jab with a tiny hypodermic.

For the next 12 hours, those blind cave fish went at it with a sense of purpose that would shock a rabbit. Before very long, Tiny Tim was father to 600 sprats.

Secret Life is an expertly edited show that knows how to tell a story. Segments never peter out pointlessly: there’s always a twist and a dash of drama. The subjects don’t have to be big, glamorous animals — viewers can get just as worried about shrimps and salamanders.

I got quite worked up about Popeye the fish, whose swollen peeper had to be removed. He weighed no more than a pound coin, but he was a character.

And you have to admit these shows are an education. Viagra for fish… who would have thought?