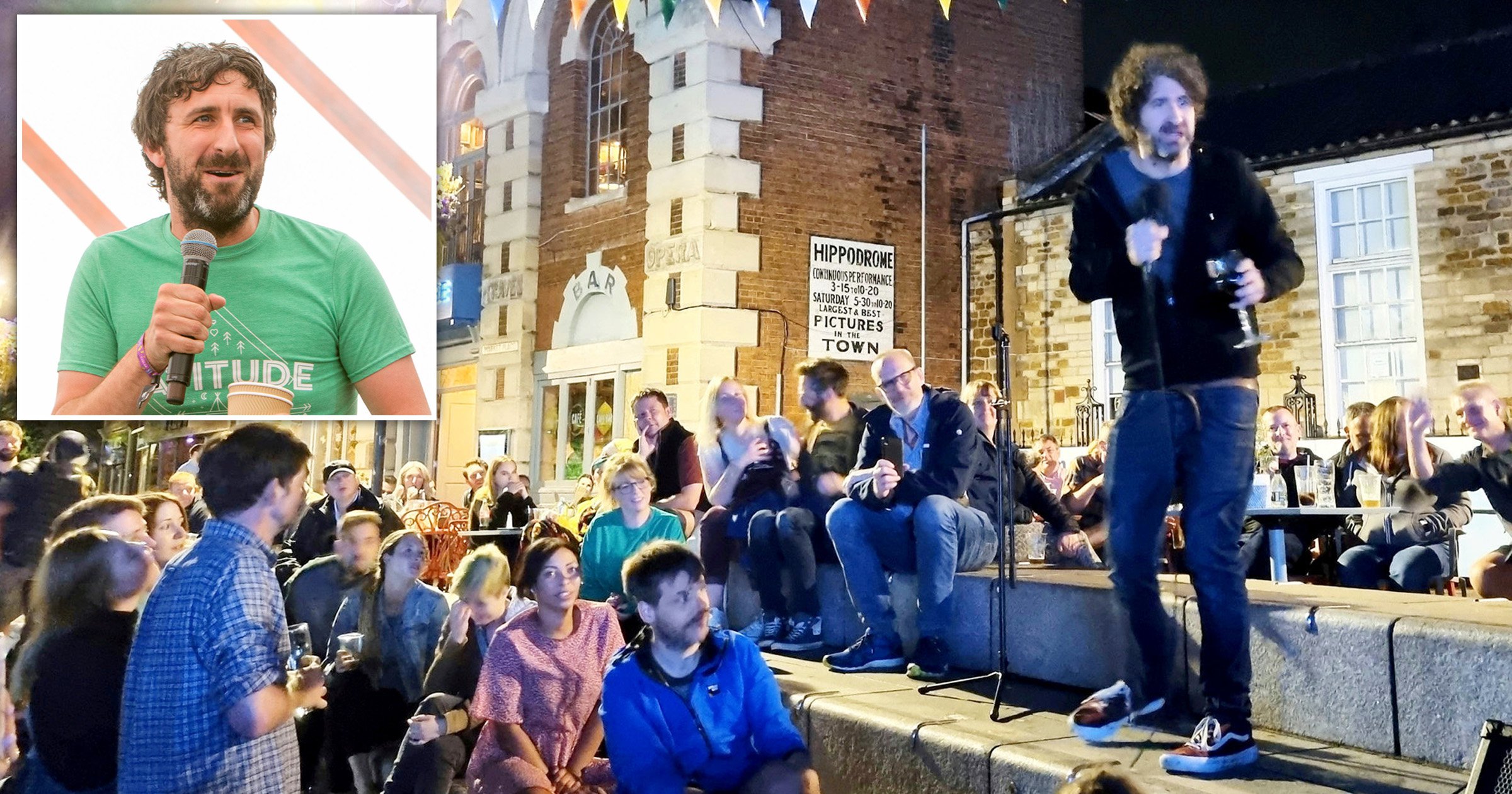 Comedian Mark Watson held a surprise outdoor gig in a town centre and bought the entire crowd drinks after being forced to cancel a show due to Queen Elizabeth II’s death.

The Mock the Week and Never Mind The Buzzcocks star performed the two-hour impromptu set in the middle of Kettering, Northants on Saturday.

His gig follows the death of the Queen on September 8, aged 96, with Buckingham Palace confirming she died ‘peacefully’ at Balmoral Castle while surrounded by loved ones.

Tributes have been pouring in for the late monarch from around the world, with multiple public venues closed and events cancelled for the country’s mourning period.

Stand-up comedian Watson said he turned up outside his venue, which was due to host him, because he had already bought train tickets and didn’t want them to go to waste.

It meant a crowd of around 50 people were treated to a free open-air comedy show, during which Watson also footed the interval drinks for everyone in attendance.

The comic was due to perform at Kettering Arts Centre, in St Andrew’s Church, but had to postpone after it opened for the public to pay their respects to the Queen.

Announcing his free show, the 42-year-old took to Twitter, prompting dozens of fans to gather outside the venue.

‘It was kind of an unusual situation. I had a lovely time,’ he said.

‘I’m not sure how many people turned out but it was quite a lot more than I expected and it was pretty fun I think.

‘I respect everyone who wishes to observe this period of mourning by not doing this sort of thing.’

Watson added: ‘But I think it is also nice that people have the opportunity to have things like entertainment and sport and other things because, at the end of the day, we’re quite a resilient nation.’

Sharing that he ‘didn’t know the Queen’, Watson thinks she ‘wouldn’t have minded what people did s long as it increased the net happiness of people’.

Entertaining the crowd, he included a Kettering-based quiz and explained why he doesn’t think he’ll ever be invited on James Acaster’s Off Menu podcast.

Rev Tom Houston, manger of Kettering Arts Centre and vicar of St Andrew’s Church, said Watson had been ‘upset’ that the gig had to be postponed, but he ‘understood’ the reason behind it.

‘Once we explained that the Arts Centre was in the church building and was expected to be open as a place of mourning for the Queen, he understood why we postponed and was happy to take our suggestion of a walking tour to the market square’, he said.

‘It sounded like that worked really well and who knows, we might have started a new thing.’

Watson, who has also appeared on Would I Lie to You?, QI, and Richard Osman’s House of Games, has previously held walking comedy tours during the Edinburgh Fringe.

Thanking the fans who showed up to his performance in Kettering, the comic tweeted that he was ‘sorry’ to the other 60,000 who missed it.

He jokingly added that they will have to ‘link up soon’ to watch the spontaneous show back, but he wasn’t sure how many people would want to watch ’90 minutes improv about a Northamptonshire town’.

Watson’s show This Can’t Be It has been rescheduled by Kettering Arts Centre for Wednesday, November 23.