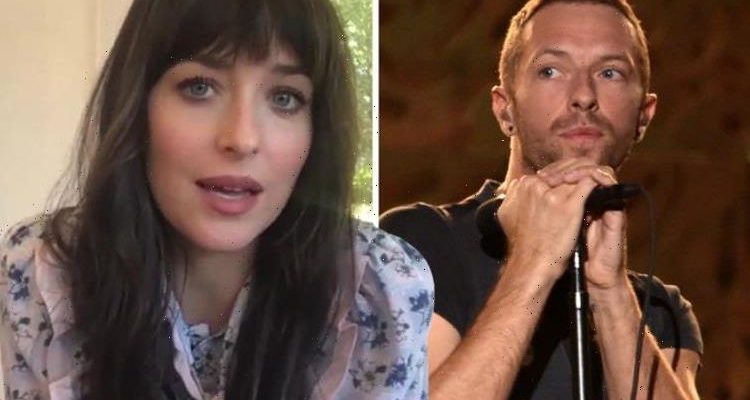 Dakota Johnson, 32, and Chris Martin, 44, have been dating since 2017 but have kept their relationship very much out of the spotlight. Now, the Fifty Shades of Grey actress has given a rare insight into her love life.

Dating rumours began after the pair jetted off to Israel for a romantic getaway and had been spotted together at a sushi restaurant in Los Angeles four years ago.

In a new interview, the actress spoke about her long-time relationship with the Coldplay frontman, where she admitted they keep their romance very low-key.

“We’ve been together for quite a while, and we go out sometimes,” she told Elle UK.

“But we both work so much that it’s nice to be at home and be cosy and private.”

She added: “Most of the partying takes place inside of my house.”

Earlier this year, Chris made a very public declaration of his love for girlfriend during a performance in London.

The singer took to the stage to gush about Dakota, calling her “my universe” while the actress watched from the audience.

Introducing the band’s song My Universe, featuring Korean boy-band BTS, Chris told fans: “This is about my universe, and she’s here,” before pointing up at Dakota in the audience.

In a video captured by fans on Twitter, the actress beams back at him as she lifts her hands up to face, looking as though she’s wiping away tears.

Chris continued pointing to her as he sang the lyrics: “You are my universe and I just want to put you first”.

It looks like the pair are very much in love, despite previous reports that they called off their relationship briefly in 2019.

The Fifty Shades of Grey actress remains tight-lipped about their relationship, telling Tatler magazine previously she “is very happy” but chose not to discuss it any further.

Dakota also appears to have a good relationship with Chris’ ex-wife Gwyneth Paltrow.

The pair have been pictured together on a number of occasions, and she accompanied Chris when he joined Gwyneth on her honeymoon following her marriage to Brad Falchuk.

The February issue of ELLE UK is on sale from 6 January.