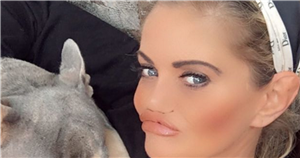 Danniella Westbrook was thrilled as she took to social media to reveal the results of her new lip fillers and botox.

Ahead of plastic surgery to correct her damaged face, the former EastEnders decided to get a few treatments and couldn't have been happier with the results.

The 47 year old shared a selfie on Tuesday where she revealed exactly what she had done to her face and explained that she had turned off her comments to prevent trolls from commenting on her looks.

"Over the moon with how my skin is looking. Huge thank you to the @knightsbridgeaesthetics8 amazing team what they have done to boost my confidence before my surgery is due at some point this year," Danniella said. She continued: "I can't lie 24/48hours after my Russian lips and fillers and Botox I was so swollen I thought I was going to burst and the poor team @knightsbridgeaesthetics8 must of been sick of me asking is this normal!! [sic]'

However, Danniella explained that five days on, she was "so happy with the results."

The former soap star concluded her post on a more serious matter, defiantly adding: "Before the haters start yes, I've turned off the comments so haters can't hate, slate and get irate. I don't care!"

Back in May, Danniella underwent the first of four surgeries to correct her damaged face.

A source told The Sun at the time that the four surgeries are an "incredibly important process for Danniella".

"It is the start of a major new chapter in her life. She receives a lot of her hate on social media and is hoping this operation will correct many of the problems," a source told the publication.

Danniella's damaged cheekbones were a result of drug addiction and botched surgeries, which led to osteoporosis.

She has previously spoken up about her insecurities about her looks.

During a 2018 Good Morning Britain appearance, the former soap star revealed: "People stare at me constantly. People elbow each other and say, "God she ain't got no nose at all".