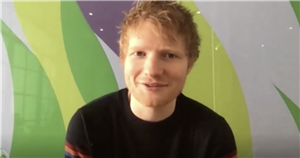 Ed Sheeran gave another emotional tribute to late friend and cricket legend Shane Warne as he appeared on Australian TV show The Project on Wednesday 16 March.

Shane tragically died on 4 March aged 52 after suffering a fatal a heart attack while on a trip in Koh Samui, Thailand, fans were devastated to learn along with his family and friends.

Among those who knew the sports star was Ed, 31, who was happy to share how his relationship with Shane began and developed over the years on the show as he described the cricketeer as “a lovely person inside out”.

Appearing via Zoom, the global artist recalled how he met Shane in 2014 when he presented Australian awards show the Logies and discovered the sportsman was staying in the same hotel as him.

Ed said that Shane took himself and his group of friends who were present at the time to his owned venue Club 23 in Melbourne — which has since shut down.

The Shape of You singer then discussed the “amazing things” the native Australian would do for him throughout their friendship, including buying him tickets to a cricket game.

“Mate, he used to do some really amazing things. I've got some friends that are huge into cricket, and he just offered one day like, "Do you want me to take them to the nets at Lord's [in London]?" Ed told the presenters on The Project.

“You guys know – the heart of that bloke was so big, and he's just such a lovely person inside and out. There's so many stories like that.”

The hitmaker then brought up a fond memory of Shane in 2015 showing him around the iconic Melbourne Cricket Ground where he played several times in his career and where his statue remains, which has since been covered in tributes after the news of his death.

“He took me in the nets at the MCG. He was bowling against my dad, and my dad was doing the hits and everything,” Ed continued.

“Then I sort of whispered to him, "Give him one proper Shane Warne ball" – man, they fly don't they! They really fly.”

The singer is due to play his first show at the MCG as he brings his Mathematics tour to Australia next year, in what no doubt will be a surreal experience for the star having lost his friend whose presence and history is tied so closely to the venue.