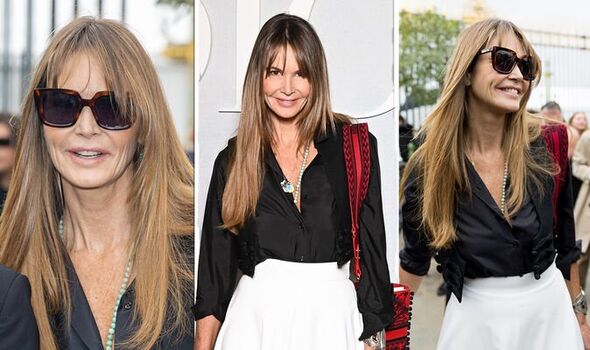 Once the most in-demand model of the 1990s, Elle glowed on the red carpet of the Christian Dior spring summer show on Tuesday, September 27. The former host of Britain & Ireland’s Next Top Model looked elegant and chic as she was mostly covered up by a long-sleeved black shirt, beyond the knee maxi skirt and high patterned boots.

The Australian model, who became known for her record five cover appearances for the Sports Illustrated Swimsuit Issue, looked flawless as she attended the event that was part of Paris Fashion Week.

Wearing a long-sleeved black satin shirt, which had a few buttons undone, and a white embroidered skirt, Elle smiled as she posed for pictures.

The model also added height to her frame with a pair of old-fashioned style black boots with a sheer lace detail, and a pop of colour was added with the large square Dior bag that she carried over her shoulder.

With little to no make-up, the star’s skin looked effortlessly good as wisps of her long light brown hair and fringe slightly covered her eyes, going way beyond her shoulders.

Having been a fashion icon for so many years it is clear that Elle still has what it takes to turn heads on the red carpet at a fashion event, even if she has personally changed her mind about what constitutes “looking good”. 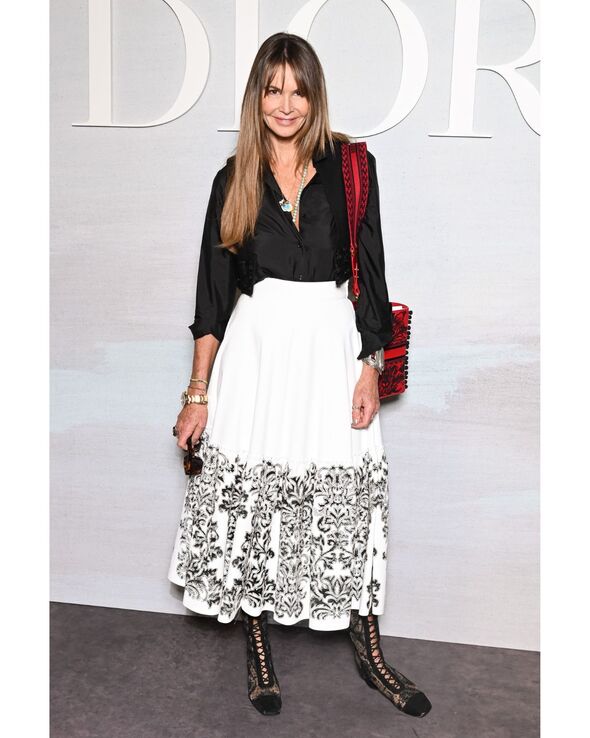 Having returned to the runway back in 2010 for a Louis Vuitton for Marc Jacobs show, also in Paris, Elle proved that she could take to the runway at any time. Posing for the cameras, Elle’s long white embroidered skirt cinched in her tiny waist, while her black satin shirt tucked in neatly. Completing the look was a red and black patterned bag, large square framed sunglasses and large bracelets on both her wrists. 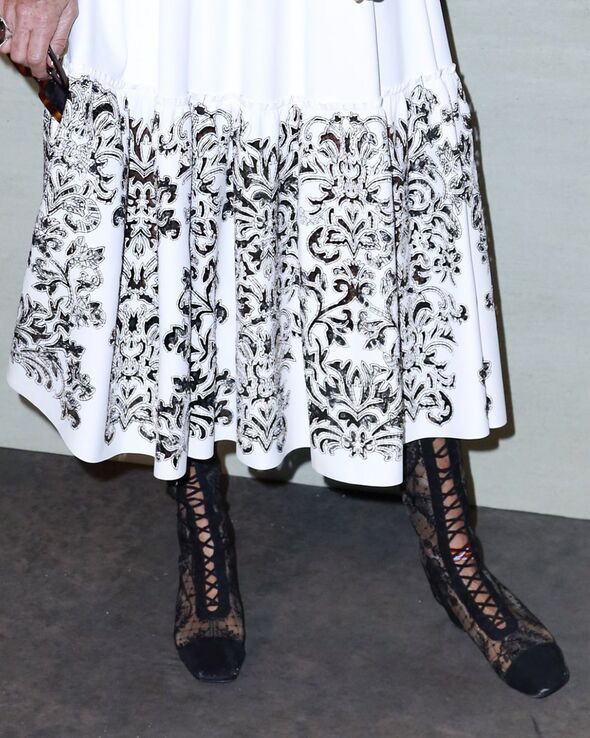 Elle’s boots were something straight from the Regency period

Complimenting the embroidery on her skirt, Elle wore laced boots, which resembled fashion popular in the Regency period. The pointed black boots featured laces going up the front and a flower patterned lace covering the sides. 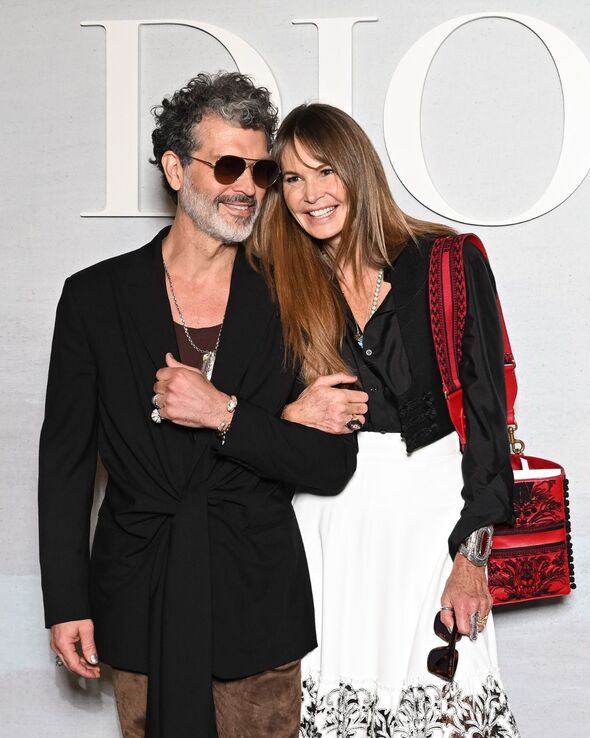 Elle beamed as she got close to her guest

Clinging onto the guest which she brought to the show, Elle flashed a smile at cameras. Her guest, who has not been named, looked smart in a black blazer, which had an extended piece of material at the front. They paired this with a brown top, lighter brown trousers and hat looked like brown desert boots. With a dog collar round his neck the male completed the look with aviator style sunglasses. 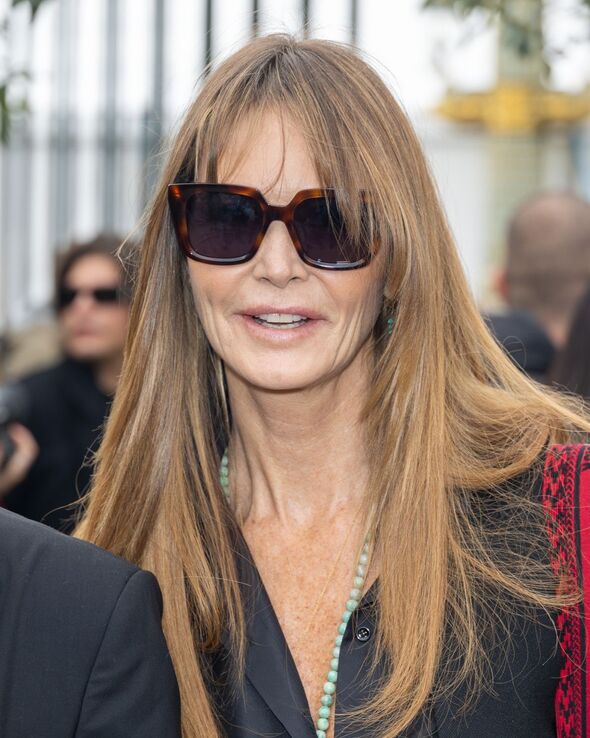 Elle’s sunglasses covered her face through most of the event

Pictured outside of the event when she first arrived, Elle was wearing large square sunglasses which covered her eyes. Smiling as cameras captured her arrival, the glasses seemed to be in a tortoise shell colour and albeit large, suited the former model perfectly. 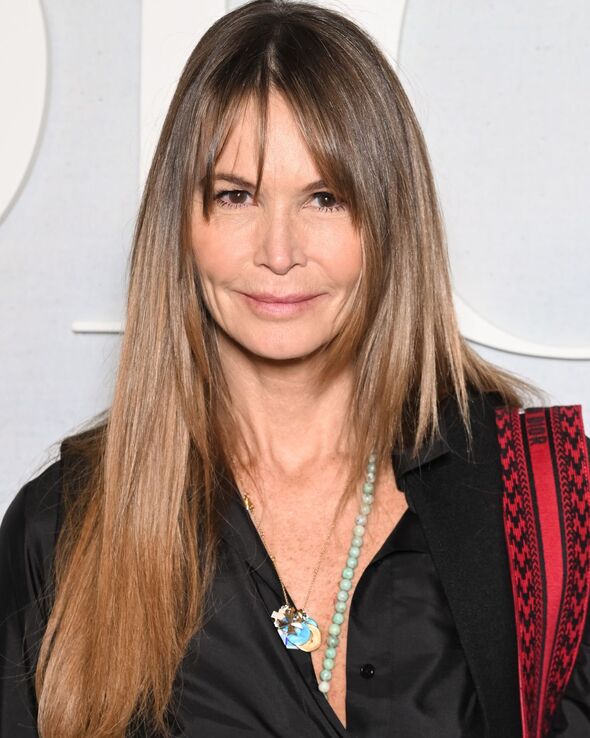 No wrinkle in sight, it is hard to believe Elle’s age

With little to no wrinkles pictured on the models face, some may find it hard to believe that Elle is nearing 60. The star’s natural make-up exaggerated her flawless complexion, with only a hint of mascara picked up by cameras. 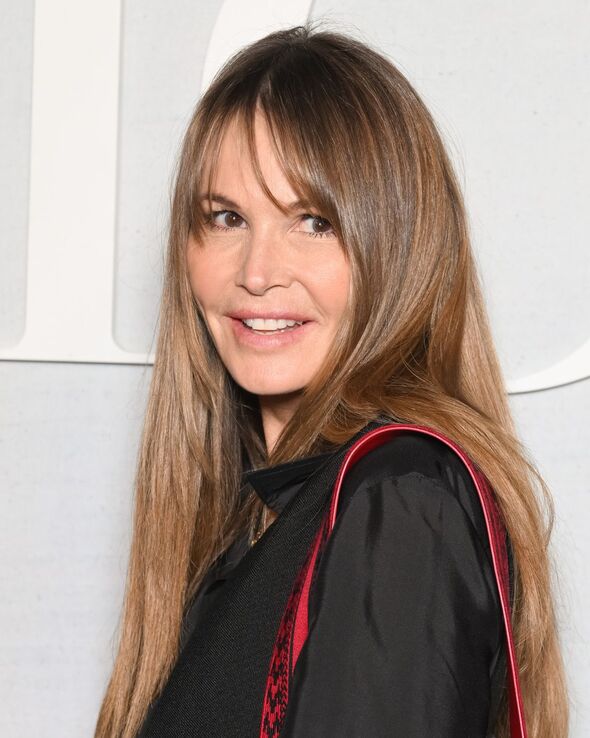 Writing in her column for Stellar magazine, Elle revealed that over the past six years she changed her mind about what constitutes looking good. She wrote: “Beauty was associated with youth, but I had come to learn that beauty is more strongly aligned with wellness. Ultimately, I’ve learnt that wellness is the new beautiful, health is the new wealth, kindness is the new cool and inner peace is the new success.”