The new Twitter head insists the blue-bird platform can’t ‘rely entirely on advertisers’ and calls subscription as the only way to kick out ‘bots and trolls.’

AceShowbiz –Elon Musk explains Twitter needs to charge for its “blue tick” to minimize “bots and trolls.” After completing his $44 billion takeover of the platform last week, the Tesla boss is now looking to charge users to have a blue tick on their account by making verification part of the Twitter Blue subscription, with reports suggesting the fee could go from $4.99 a month to $19.99.

His plans have upset many users on the app, including iconic horror writer Stephen King, who insisted he would quit if that was the case. “$20 a month to keep my blue check? F*** that, they should pay me. If that gets instituted, I’m gone like Enron,” he tweeted.

He also promised to delve deeper into his “rationale” for the move before it gets put in place. He added, “I will explain the rationale in longer form before this is implemented. It is the only way to defeat the bots and trolls.” 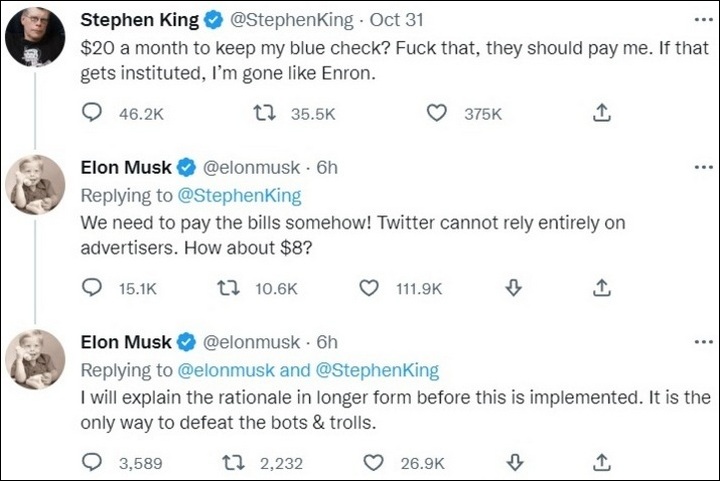 Before the sale of Twitter was finalised on October 27, the 51-year-old business mogul shared his vision for the platform. He tweeted in a message called “Dear Twitter Advertisers”, “The reason I acquired Twitter is because it is important to the future of civilisation to have a common digital town square, where a wide range of beliefs can be debated in a healthy manner, without resorting to violence.”

Elon added there is a huge danger social media will splinter into far right-wing and far left-wing echo chambers that could divide society, warning, “In the relentless pursuit of clicks, much of traditional media has fuelled and catered to those polarised extremes, as they believe that is what brings in the money, but, in doing so, the opportunity for dialogue is lost.”

“Twitter obviously cannot become a free-for-all hellscape, where anything can be said with no consequences! In addition to adhering to the laws of the land, our platform must be warm and welcoming to all, where you can choose your desired experience according to your preferences, just as you can choose, for example, to see movies or play video games ranging from all ages to mature.”