Evan Peters has become an integral part of American Horror Story as one of the only actors to star in all eight seasons of the anthology series, but his perfect attendance record is coming to an end with the the upcoming ninth season, American Horror Story: 1984. After Peters revealed he would be sitting out for Season 9, fans got worried about the possibility of him not returning to the series even after the new season. And Evan Peters’ comments about returning to AHS after Season 9 in a recent interview with Digital Spy have fans more confused than ever.

A couple months ago, Evan Peters shocked the American Horror Story fandom by revealing that he will not be a part of the show’s ninth season, marking the first time in the franchise’s history that he will not appear in a season. Peters stated that he was just "going to sit a season out," which made it sound like he would return to the series in future seasons, but now he is being even more vague about his future with AHS. When asked whether he would return to the show after Season 9, Peters replied, "Yeah, absolutely, never say never. I just… Yeah, we’ll see what happens." Hmmm, that’s not exactly a yes or no, but it does sound somewhat promising that we have not seen the last of Evan Peters on American Horror Story. 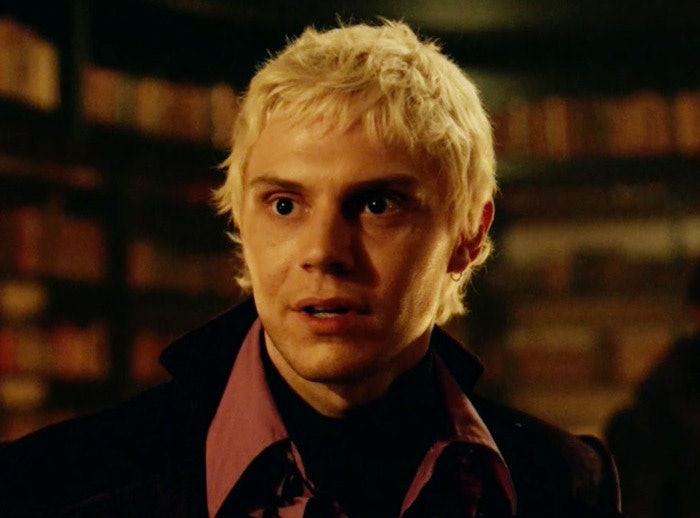 Adding even more confusion about the upcoming season, Sarah Paulson recently stated that she knows the least about this season than she ever has before, causing some fans to think that she may also not be in it either. This would be a huge deal for American Horror Story since Evan Peters and Sarah Paulson are the only two actors who have appeared in every single season of the show up until now. If both actors do not show up in AHS: 1984, then the series will officially no longer have any perfect-attendance stars.

So far, the only confirmed cast members for American Horror Story Season 9 are AHS alum Emma Roberts and AHS newbie Gus Kenworthy, who will be playing a couple. Along with Evan Peters revealing that he is not in the new season, recent AHS alum Billy Eichner also stated that he is not a part of the upcoming season.

Last month, showrunner Ryan Murphy revealed the title for Season 9 will be American Horror Story: 1984 in a short teaser clip showing a murderer chasing a woman through the woods. The title and short video seem to confirm that the new season will adopt the tone of ’80s slasher movies. Check out the teaser clip below:

As with previous seasons, AHS: 1984 is predicted to go into production this summer and will likely premiere on FX sometime in September. Fans should expect to get a lot more information about who is starring in the new season and what the new story will be about in the coming months, so keep your eyes out for more AHS news soon.