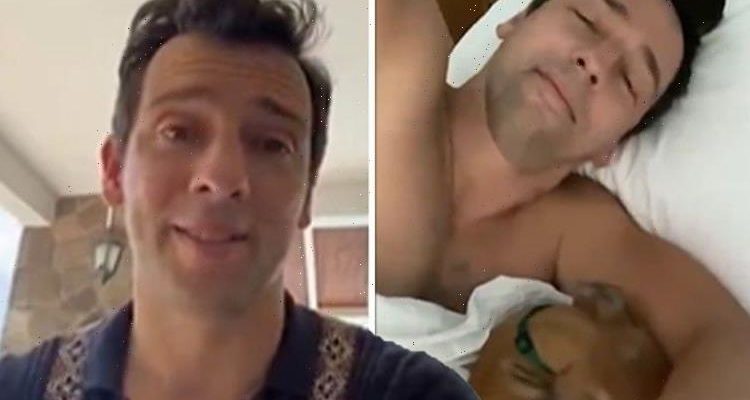 Ralf Little has been keeping fans of Death in Paradise up to date as the latest series films on the island of Guadeloupe. In his latest video, the DI Neville Parker star can be seen chatting with Josephine Jobert about a puppy they found.

Fans of Ralf will know in the past few weeks, he found an adorable puppy on the set of Death in Paradise.

He’d been tasked with looking after the animal as he shared a sweet video of them falling asleep together.

However, the actor has now revealed Josephine had to step in to help him out with the dog.

Posting in view of his 80,000 followers, Ralf shared an update about this.

He said: “So I haven’t updated about the little pub in the last couple of days…

“And the reason is a couple of days ago we were contacted by the owners of the villa who had seen her on Instagram and thought she was gorgeous.

“But there is contractually speaking a no pet policy at the villa, which I didn’t know about.

Ralf then revealed the little dog was staying with Auntie Josie while they sort this out.

Josephine then appeared on the video saying: “She’s my baby, I love her so much, she’s the cutest!”

“I’m really jealous because I don’t get to cuddle my little puppy in bed any more,” Ralf continued.

To which Josephine hit back: “Is it your puppy? I don’t think so, we still need to discuss this.”

Ralf replied: “This is an ongoing debate but that’s where she is so far.”

The actor captioned his video: “Giving An Update About The Stray Pup On Set.

“A little update on the wee pup we found on set! Auntie Josie to the rescue.”

Elsewhere, Death in Paradise has welcomed a new cast member to the show.

Shanton Jackson is joining the show as Sergeant Naomi Thomas.

The BBC has shared the first pictures of her character in action in the series.

They also shared what her official character description is ahead of her introduction.

This reads: “The ambitious and gifted Naomi joins the Honoré police force having arrived from a neighbouring island but, despite her lack of experience, is keen to make her mark.”