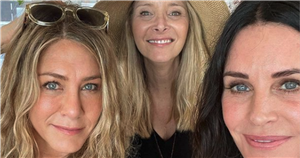 Courteney Cox has revealed she celebrated the 4th of July with her Friends pals Jennifer Aniston and Lisa Kudrow.

The 57 year old, who is known for portraying the neat-freak character Monica Geller on the hit sitcom, delighted her followers by sharing a sweet photo of herself alongside her two former co-stars for Independence Day.

The Instagram snap showed actress Courteney dressed in a beige jacket as Jennifer, 52, who played Rachel Green, stood by her side dressed in a black top with translucent yellow-framed sunglasses balanced on her head.

Lisa, 57, who brought life to Phoebe Buffay, could be seen standing behind the pair as she donned a black top with a sun hat and a gold necklace.

A second photo saw Courteney posing alongside actress Laura Dern, 54, who is best known for her roles in Jurassic Park and, most recently, Big Little Lies.

Courteney, who recently revealed she was hurt to be the only Friends star without an Emmy nomination, captioned the pictures: "Happy 4th! xoxo".

Thousands of her 11.6million followers were quick to comment on the post as one person wrote: "you girls are definitely everything!"

"the holy trinity breaking instagram in 3…2…1…" another joked as a third said: "THE BEST TRIO OMGG!!! Happy 4th honeys," with a heart circling emoji and a red heart emoji.

While a fourth added: "name a better trio, i’ll wait," followed by a white heart emoji.

It comes after Courteney, Lisa and Jennifer reunited with David Schwimmer, 54, Matt LeBlanc, 53, and 51 year old Matthew Perry for a one off special to reminisce about the show that made them all catapult to fame.

The cast members each had an idea of what their characters would be doing today.

"I would like to have maybe started a clothing line of my own, and it's sort of a small franchise. Like a Nili Lotan. And I live in New York City on the Upper East Side," Jennifer said of Rachel.

Become an OK! VIP and see all our exclusives – for free!

Become an OK! VIP and you will unlock access to all of our big exclusives…

Be the first to meet the latest showbiz babies, see the most sought after wedding pictures of the year, or take a guided tour around your favourite star's lavish multi-million pound home – all for free!

Courteney then explained: "I always just feel like Monica would be doing something competitively with other mothers and trying to outdo them.

"Whether it's the bake sale at school or something. I mean, she'd be so annoying. She'd be at the head of the PTA or something."

Lisa thought Phoebe would be "living in Connecticut with Mike and their kids, and she's in charge of the arts program for the school. And just… The advocate for her kids because they're different like she was."

Matt said Joey "would have opened a chain of sandwich shops," as Matthew added: "And eaten all the sandwiches."

As for Ross, aside from "playin' with the bones" as a palaeontologist, David said "he would've invested in Joey's sandwich shop and lost a lot of his savings for his kids."