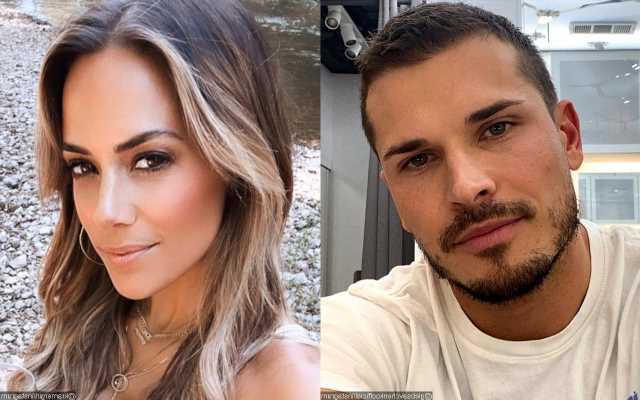 After being hit with rumors claiming that they hooked up while filming season 23 of ‘Dancing with the Stars’, the Russian professional dancer admits that he’s ‘surprised’ and ‘sad.’

AceShowbiz –Gleb Savchenko has weighed in on rumors that he had an affair with Jana Kramer while competing together on “Dancing with the Stars“. The Russian dancer, who filmed season 23 of the competition show with Jana, insisted that “there’s a lot of acting.”

Speaking to Entertainment Tonight during his 2022 MTV Movie & TV Awards red carpet appearance, the 38-year-old dancer said, “There’s a lot of acting, there’s a lot of chemistry, natural chemistry and you know, when you dance and you train someone every day, and you’re up close and personal, you develop a certain connection.”

Gleb further explained, “The viewer sees it. I mean, you want to have that because you want to last in the competition, and my job was to make sure that we go really, really far.” He then stressed, “Have we ever had anything? Absolutely not. Absolutely not.”

“Whatever she might have said it to her boyfriend, maybe she tried to make him jealous, you know,” Gleb opined. He continued, “You can ask her the same question, she’ll probably answer the same thing.”

Of the wild allegations, Gleb admitted that he was “sad” that Kramer’s ex, Ian Schinelli, would make those kinds of claims. “I just feel a little sad that he had to go that way and say something like that about her,” the professional dancer said. “I was totally surprised. She texted me, she’s like, ‘Dude, like can you imagine he said all of this? I’ve never, you know…whatever.’ So, but, absolutely not.”

Gleb went on noting that Jana was not letting the rumors bring her down in the slightest. He added that in fact, she told her former partner that she’d return to “DWTS” to dance with him if the show were to ever have an All-Star season. “She said, ‘Listen, if there’s an all-star season, I’m coming back and dancing with you,’ ” he revealed.

Last month, Ian told Us Weekly that Jana told him she once “slept with two guys while [Mike Caussin] was in rehab.” One of the men was Gleb. Ian added, “She justified it by saying, ‘We were legally separated.’ “

“She even tried to meet up with Gleb while we were dating. He was doing a show in Nashville and she asked me if it was OK if she met up with him,” Ian added. “I said, ‘As long as there was nothing there anymore,’ and she said, ‘No.’ She never went and said it was out of respect for me.”