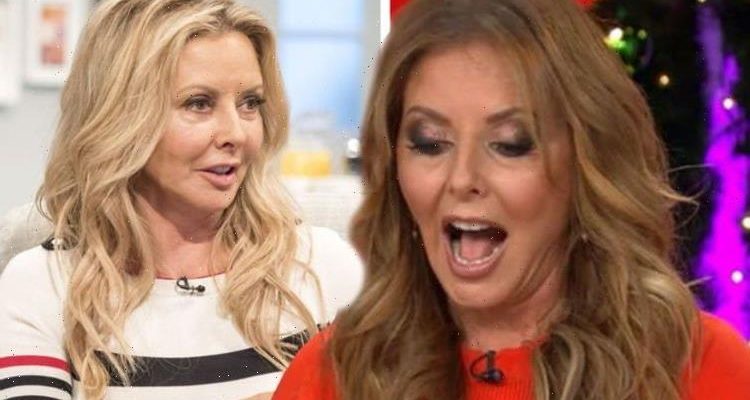 Carol Vorderman’s love life has been one that has garnered much fan attention, with the blonde beauty linked to numerous men over the years. The 60-year-old is currently single, and she revealed that status is unlikely to change as we head into 2022.

Happy as I am!

Carol made the jokey comment on her Instagram story, after playing a game on the social media platform which predicts what the new year will bring.

The idea is to screenshot and see what word you land on.

Trying her hand three times, her first go told her she would receive heaps of “happiness”.

The Countdown star was elated with that, but the second she seemed a little more sceptical.

Her screenshot landed on “taken”, to which she commented alongside laughing emojis and two prossecco glasses: “Doubtful. Happy as I am!”

Recently, the TV star bid farewell to her beloved house, which she had affectionately named “Sloblock Hall” in tribute to a cheeky moment from the Channel 4 show.

She shared a series of photos of her beloved home to document her memories while preparing to “move on”.

Carol’s palatial home featured an outdoor swimming pool, complete with a diving board, a modern kitchen, and a cosy living room.

The maths expert’s collection of pictures included a selection of selfies from in and around her property.

The TV personality concluded her gallery by posting a snap of her house looking festive with a roaring fire and a Christmas tree in the lounge.

Carol captioned the photos in view of her 192K followers: “SLOBLOCK HALL.

“Goodbye my happy place… So many wicked parties… so so many brilliant memories.

“I’m a lucky woman. And now I’m moving on to yet more new adventures.

“Wishing the new family who call you home now every happiness and health and laughter. Cheers SLOBLOCK We had a blast.”

Carol went on to reveal that she named her home a near-anagram of “all b******s”.

“Sloblock” was a conundrum on A Bit of Fry & Laurie, during which Stephen Fry and Hugh Laurie mocked Countdown.

The word then became a joke between Carol and Richard Whiteley, as she mischievously explained: “SLOBLOCK became our Countdown swear word. I named my house SLOBLOCK HALL.

“My theory on ego and showbiz and taking life too seriously it’s HALL B*******S.”

Carol then shared a video of herself leaving her property in her car for the last time, before writing: “Wishing the new owners of SLOBLOCK HALL every happiness and health and just every wonderful wish possible.

“I’m on to new adventures #forevermovingon.”