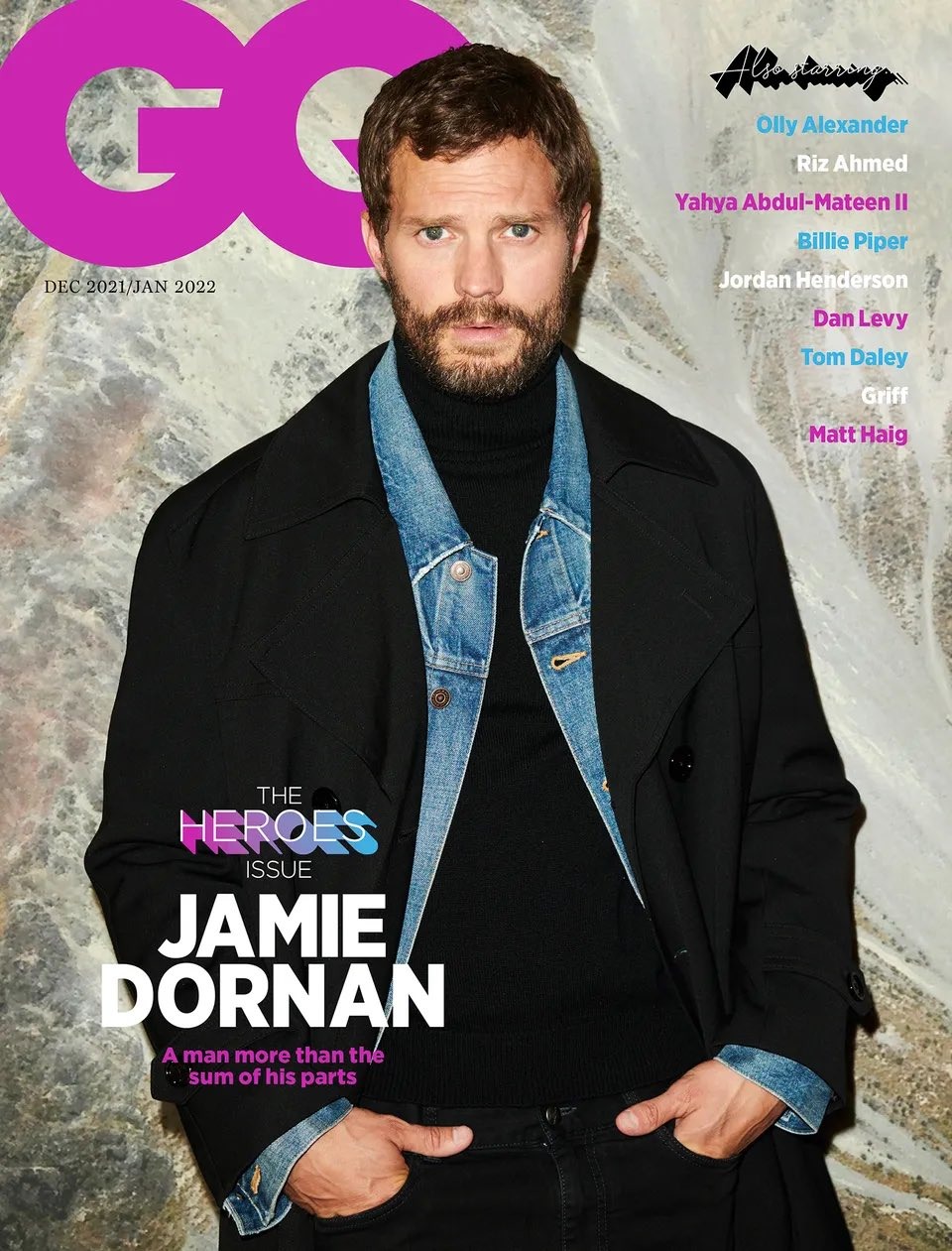 Jamie Dornan covers the latest issue of British GQ. He’s promoting Belfast, which Kenneth Branagh wrote and directed. It’s a semi-autobiographical film for Branagh, it’s loosely the story of his childhood in Belfast just before the Troubles and just as the Troubles were beginning. Dornan plays (a version of) Branagh’s father and Caitriona Balfe plays a version of his mother. It looks surprisingly good, almost unexpectedly good. There’s talk of awards-nominations for Branagh, Balfe and Dornan. As for Dornan, he comes across pretty well here, like a man who has come into his own. He’s almost 40, he’s the father of three young girls, he’s happily married and he works consistently. I feel like this British GQ piece focuses too heavily on Dornan’s decision to do the Fifty Shades franchise, but whatever. Some highlights:

He moved his family out of London to Stroud: “It was after finishing the Fifty Shades films, really. We just had a desire to get out of the city entirely. We had a small place down the road in the Cotswolds, but upscaled. We still have a place in London and get decent use out of it. The move was for the kids, really. You don’t notice the traffic or the poor air quality in London when you’re there, but you notice its absence once out. Also, have you seen how many f–king apps you need to park in London?”

He set up a local dads’ football team. “I thought I was easily as fit as the other fathers, but we came back from Australia about two months ago, having been there for five, six months, and both my knees totally went in the first few minutes.”

His father passed away in 2020: “I lost my father last year to Covid. He was such a beacon of positivity in my life, such good energy to be around, [and] I hope to carry that on. But his death was pretty brutal. I was in quarantine in a hotel in Sydney with my whole family, with still three days of quarantine [left on] the day he died, not able to leave this f–king room. And I hadn’t seen him since Christmas 2019, like so many people… F–king dreadful. But he impacted so much on us when Mum died, about not being defined by a loss like that; wearing it at all times and honouring it and respecting it, but not to let that be the first thing people think of you. But now he’s gone, what can you do but kick on?”

His early days as a model: “Aged 21, I was doing some big, big campaigns – they were a huge deal – earning good money, but because I never really saw modelling as a career I guess I didn’t let it get to me too much. I still don’t know what I’m supposed to think about [being called The Golden Torso]! It’s a different industry for women; you can’t be the male Kate Moss. It’s the one industry where men earn significantly less than women.”

He hated the energy around models: “Well, I never had to do a fashion show. I couldn’t handle other male models, that hyper energy.” What was it about them? “Well, I don’t know… I mean, what’s the collective noun for a bunch of male models? But I struggled with, let’s say, the energy. There’s too much vanity and it just feels douche-y as f-ck. Too much nonsense. Whenever I went on a date or met a girl in a pub or whatever, I’d say I was a landscape gardener or worked for Google – anything but admit to having my photograph taken for a living.”

He knew Fifty Shades would not be well-received critically: “Oh, yes. I walked in knowing that. But nevertheless, it was a massive opportunity. I’ll never forget, the Guardian did this long piece on Fifty Shades – it was just after The Fall came out and I had been nominated for a Bafta, a huge moment in my career – about my announcement and about what a devastating career choice it was for me. So the early consensus of my ‘bad choice’, let’s just say, I was very aware of that narrative.”

Does he regret taking the Fifty Shades role? “Ultimately, no. I mean, I understood the job and the reactions. I was in the running for it for a long time, remember. It wasn’t some split decision I made on a whim… Look, put it this way: it’s done no harm to my career to be part of a movie franchise that has made more than $1 billion. Every working actor would say the same thing. It’s provided – a lot. There’s no shame in saying it’s transformed my life and my family’s life financially. I am very, very grateful for this and always will be. And the fans loved it. Kevin Maher [the film critic] at the Times didn’t love it – what a surprise! But I take issue with the whole thing being just a bit of a joke. Everyone involved worked as hard as they could on those films, including myself.”

He still feels like he’s paying penance: “Whether A Private War, Anthropoid or Belfast, or whatever comes next, the line in the press is always, ‘It’s the best thing he’s done since Fifty Shades.’ As if I am still needing to prove myself; I am still paying penance for that choice to get me back to where I was beforehand. Look, I get it, and, to be honest with you, it spurs me on. It lights a fire in me. If that means people saying, ‘Oh, actually he’s not that bad,’ well, so be it.”

He’s right that he’s still “paying penance” for Christian Grey, but that’s because the British press won’t let it go. And I don’t understand why – the franchise is over, it made money, it was successful and Dornan and Dakota Johnson have clearly moved far past it. He made a calculated risk that he would be part of a dumb franchise which would make him rich and famous. It’s as simple as that. I sincerely hope we don’t have to still hear about Fifty Shades throughout this promotion. As for his dad dying… how devastating. There are so many awful Covid stories like that, and we’ve barely scratched the surface. Meanwhile, the media makes it into a game of “oh, these people are mad at masks!!”