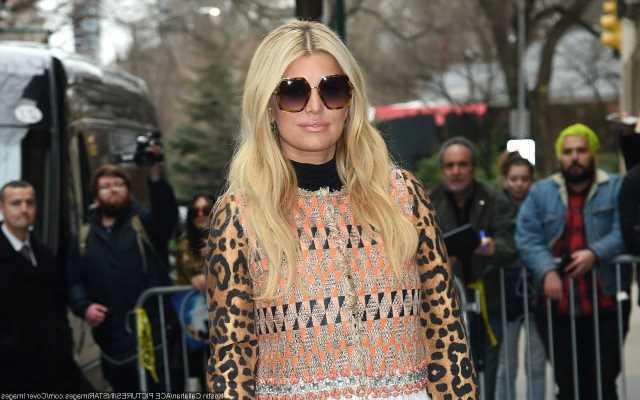 The ‘Dukes of Hazzard’ star pours her emotion into singing as she shares that ‘peoples’ comments and judgements can still hurt deeply’ after her Pottery Barn ad prompted a lot of chatter about her ‘strange’ behavior.

AceShowbiz –Jessica Simpson has seemingly responded after her recent Instagram video sparked concern over her “strange” behavior. Returning to the same platform, she clapped back at critics’ “incessant nagging,” which still “hurt” her “deeply” despite years of trying to block it.

In a new video posted on Sunday, November 6, the singer/actress filmed herself in her studio as she channeled her emotion into singing. In the caption, she shared a lengthy message which read, “I needed to be in my studio today because this is where I ground myself and heal. As much as I have learned to block out destructive noise…peoples’ comments and judgements can still hurt deeply with their incessant nagging ‘you will never be good enough’.”

“The most important thing I have learned through the last 5yrs without alcohol being a guard for escapism, is that I CAN and ALWAYS WILL get through it,” she continued. “I am capable of pretty much anything I care enough about to put my mind to. I am present. I am deeply inspired. I am determined. I am honest. I care about other people.”

The “I Wanna Love You Forever” songstress explained how singing has been therapeutic for her, “After grounding myself just now with my voice and the lyrics across my heart, I feel compassion for the opinionated hate that some people can so effortlessly just blurt out with such intensity on social media or in the media in general.”

The 42-year-old went on opening up about dealing with insecurities, “We all have our days of wanting to be, look, do, and feel better. Nobody is alone with that feelin’ that I can promise you. I woke up at the same time anxious and insecure but also also angry and defensive – like some of you.”

Having overcome it, Jessica continued to pen, “I know what works for me and that is to let go and simply sing while lookin directly inside the mirror, straight in my eyes to really see and understand myself. I can connect with my heartbeat. I am stable and strong. I am home.”

She ended her message with “a little advice,” which read, “live inside your dreams and move through them. Don’t give up on yourself because someone else did. Stay true to YOU. It has worked for me in this chaotic life thus far. Nothin’ and nobody will rob me of my joy. Ya might come close but it is mine to own. Yours should be too.”

Jessica didn’t specifically mention which comments that “hurt” her, but she was recently scrutinized for looking “frail” and appearing to slur her speech in a Pottery Barn ad. As she showed off her daughter Birdie’s room, the star, who has lost 100 pounds since embarking on a weight loss journey, seemingly struggled to put the words together.

“Something is wrong here,” one noticed after watching the video. “Is she ok?” another fan asked. “Wtf happened to her face. She can barely speak. Shame,” a naysayer remarked, while another user wondered, “Please tell me I’m not the only one that hears her voice being totally slow…is she ok?!?!”

Some quickly came to Jessica’s defense, with one user writing, “It’s sad that all these comments are about her appearance. It’s none of anyone’s business. I wish people were kinder.” Another wrote, “Adorable room. Ignore the haters.” Another fan said, “Super cute room! And for the haters, she has always been a small woman, just not when pregnant (as 95% of women) – so cut her some slack. Let her live!”