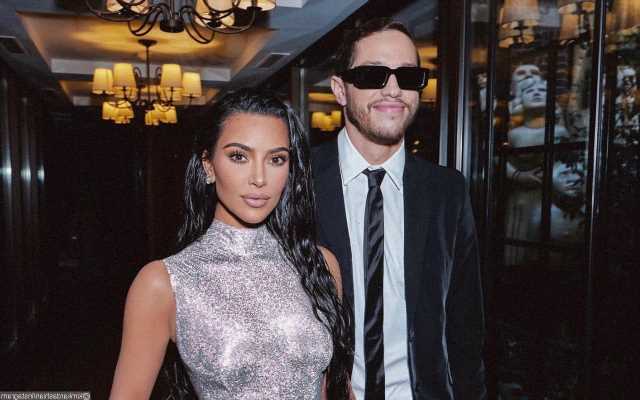 AceShowbiz –Kim Kardashian is “very comfortable” allowing Pete Davidson to spend time with her children. The 41-year-old reality star, who shares North, Saint, Chicago and Psalm with ex-husband Kanye West, has been dating “Saturday Night Live” alum Pete, 28, since October 2021 and is reportedly letting him spend more time with her children as their relationship becomes “more serious”.

“Pete and Kim’s relationship has become more serious, and Kim feels very comfortable allowing Pete to be around the kids and has spent a lot of time with them recently,” a source claimed. The insider went on to explain that “The Kardashians” star did not initially want to “force” her boyfriend to spend time with her brood, but now that Pete’s relationship with her children has progressed naturally, it has been a great source of stress relief for her.”

“Kim didn’t want to force anything and loves that it has been a natural progression. She loves that she can trust Pete to take them to do activities on his own. It takes a lot of stress off of her and their relationship. She thinks it’s really cute and is grateful for how seamless it’s been. Pete is really good around the kids, and they all love him,” the insider spilled to Entertainment Tonight.

Meanwhile, a second source also revealed to the outlet that the rest of Kim’s family – which includes the likes of sisters Khloe Kardashian, 37, and Kourtney Kardashian, 43, as well as “momager” Kris Jenner, 66, – love having Pete around and that he has been “careful” to ensure everyone was “comfortable” with him.

The insider added, “Everyone loves having Pete around. He’s so much fun and brings such a positive and loving vibe. Kim is so grateful for how easy he’s made this and how understanding he is of everyone’s feelings. Pete was careful because he wants to make sure everyone is comfortable.”