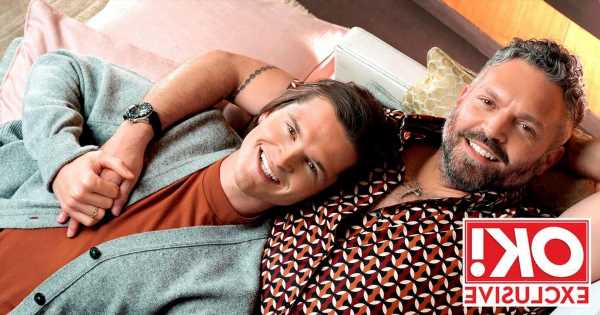 This time last year, Matt Jameson and Dan McKee were paired up by Married At First Sight UK experts Mel Schilling, Paul C Brunson and Charlene Douglas, – and it’s clear they were a match made in heaven.

A year on from their time on the show, the loved-up couple are now living in their sea-view apartment in the small town of Portstewart. It’s a big change for Matt who has swapped his busy city life in Leeds for the tranquil Northern Irish coast.

“We’ve made it our home now. We want to get a dog, but we’re not allowed one in our apartment. So we will be moving somewhere else for that to happen in the near future,” Matt, 40, shares with new as we catch up over Zoom.

After tying the knot on the E4 reality show, the couple are now planning an official ceremony, which will see them become husband and husband for real.

“A wedding is something I would love,” Matt gushes. Dan, 28, who runs his own wellness retreat business, Wildbay Retreats, adds that it is on the cards, but they are in “no rush” as they have plans to travel the world before walking down the aisle again.

As this series of MAFS UK comes to a close, Matt and Dan recall their own TV wedding day – including the moment they shared their first smooch.

“It really excited me!” Dan laughs. “It was good fun kissing a stranger,” with Matt letting out a chuckle as he reflects, “We were both in tune with each other and felt the vibe instantly.”

Here, Dan and Matt talk to us about their new life in Northern Ireland, second wedding plans and their fears of being trolled…

Hi, Matt and Dan! What has it been like living together in Northern Ireland?

Matt: It’s been great. I moved over in February, and we’ve got our own apartment on the coast of Portstewart, which is absolutely beautiful. We’ve got a sea view with lots of space as well, which is so nice. It’s been a massive change for me moving from the city life in Leeds to the coast, but it’s just been fantastic. I’ve embraced it and Daniel’s been fantastic in helping me with that transition. We’ve made it our home now.

Dan: Yes, it’s been really good. I obviously went on the show looking for someone as it was slim pickings where I’m from.

Matt: So, you’re stuck with me!

What have you both learnt about each other since moving in together?

Dan: All of it! The real test of the relationship is after the show because, during the show, you’ve got everything catered to you. They make your food and they feed you with compliments. I only really got to know Matthew properly when we moved in. There are challenges. Matthew is a bit of a pro cleaner, but I’m a wee bit more relaxed. For us, it was learning those little day-to-day things that we both do, but it’s all living and learning. We still have the craic, he makes me laugh every day.

Matt: Messy is the word you’re looking for, Daniel! You’re very messy. You relax into it. You’re learning about each other and what each other’s strengths and weaknesses are. Dan is a brilliant cook, he does most of the cooking. And I don’t do any of the cooking, but I clean everything. I’m used to that because I was living on my own for quite a long time. But as Daniel said, we still have such fun together. We still have the craic, which is so much fun.

What has it been like coming out of the show still together?

Matt: The bubble you’re in together is intense when you’re filming. I don’t know if you recall, Daniel, but when we came out after our final vow ceremony in Brighton, they said, “Right, off you go.” So, we sat on Brighton Pier and went to one of the bars, had a few beers, and it was just such a relief. We said, “So, what do we do now?” Nobody’s telling me what to do, and that was what you were used to. It was a bit weird, but you just ease into it. We spent lots of time in Leeds and then in Northern Ireland before I made the move this year.

You said you would like to get married again…

Matt: I would love to do that. We were at one of Dan’s friend’s weddings recently and we got chatting with a wedding planner. It’s definitely something we’re thinking about. I would love it and I know Dan would as well. But we’re in no rush, we’re embracing what we have together right now. We’ve gone through this immensely intense experience.

Dan: It’s nice to have this little lull where we’re just enjoying each other’s company before we embark on something big again. I think it’s nice. It’s definitely on the cards. But there is lots to see out there and we want to put our money towards travelling together right now.

Are you wanting to travel anytime soon?

Dan: Absolutely. We’re always going away on little trips. We’re planning a couple of things before the end of the year. I’m a bit of a backpacker, rough and ready, but Matt is more into his hotels, so we’ve come to an agreement that we’ll do a bit of both.

Matt: I’m looking forward to it. I’ve never done the backpacking thing. And Dan’s gonna show me the ropes!

Are you still in touch with anyone from last year’s show?

Matt: There’s no group chat. There was, but then everyone drifted into their own separate groups. Nobody really talks on the group chats now. Everybody’s got their own little cliques. But we’re quite good, we’re in touch with quite a lot of people. There are some people that I didn’t like and I don’t speak to. But there are some I really get on with. I’m really close with Marilyse Corrigan and Luke Dawson. I also see Nikita Jasmine quite a bit. She’s hilarious to be around. But it’s good to keep in touch with everybody because we’ve all been through this incredible experience together. Some have had a great experience from it, and some haven’t as much, but I think the fact we’re all there to support everyone is great. It’s a bond that brought us here because we’ve all experienced it together.

Dan: You’re pretty good at keeping in touch, I guess it’s nice to see everyone and things. Matthew is always the one to do it, he’s the social butterfly in this marriage! But as Matthew says, we’ve all been through a journey together that will never break. Marilyse and Luke, for example, are people you can turn to for advice and I believe you should put your energies into friendships like that. You naturally gravitate to some people more than others.

Have you watched your series again at all?

Dan: Yes, we watched it all together, but Matthew likes to put our wedding on repeat!

Matt: Yeah, I’ve watched it back quite a lot. I love our wedding. I have it recorded. I do like to go back to see where it all started, and it was so amazing. Especially now that we’ve got the new series, you automatically compare it and I still think that our wedding was the best!

Was it weird posing and kissing for your wedding photos when you didn’t even know each other at the time?

Dan: It really excited me! It was good fun kissing a stranger. I was just embracing the experiment. I knew that was part and parcel of being on the show. When you watch the new series, you see there’s a bit of awkwardness because it is a personal preference, strangers or not.

Matt: We’ve all snogged a stranger in our time. I think we were both on the same page, though. We had that instinctual reaction anyway. As Daniel said, it was exciting because there was a spark between us. And Daniel, I always remember you were really tactile. I really liked that because I’m like that as well. We were both in tune with each other and felt the vibe instantly. It didn’t feel awkward at all, it felt natural.

Have you experienced any trolling since the show?

Matt: We haven’t! I was nervous about that. You get to speak to the aftercare team with psychologists after the show
and we had a few sessions. I told them I was worried there might be some negative stuff online about us. It was the first time they’d had a gay couple, and I was thinking people would troll us about that, but we didn’t have anything. I was so surprised. It was so nice that we were embraced by the nation.