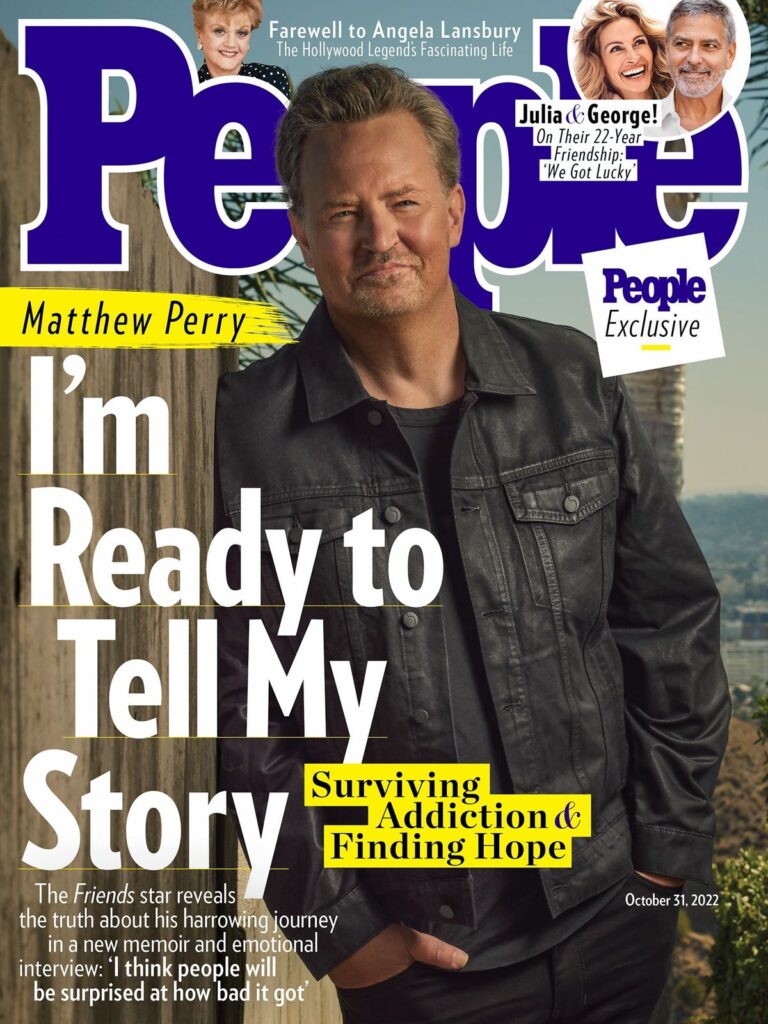 Matthew Perry has a memoir coming out November 1st. I was intrigued when I heard the announcement because I think Matthew’s a smart guy and I like his humor, so I think he’d be a good writer. And, he has a story to tell, being raised privileged (he grew up with Justin Trudeau), he’d hoped to be a pro tennis player, his enormous fame with Friends, his crippling addiction to opioids, his sketchy romantic life and his near-death experience after suffering from a GI perforation. Only now, in his memoir, we learned the perforation was a burst colon due to an overuse of Oxycontin. He spent two weeks in a coma, five months in the hospital and nine months with a colostomy bag. When he entered the hospital, the doctors told his family Matthew had a 2% chance to live. But he survived to write about it.

Matthew Perry is ready to share the truth about his life.

The Friends star, 53, beloved for his portrayal of Chandler Bing on the hit TV series, has written a heartbreakingly beautiful memoir, Friends, Lovers and the Big Terrible Thing (available Nov. 1), detailing his journey — one filled with incredible highs and shattering lows.

“I wanted to share when I was safe from going into the dark side of everything again,” he tells PEOPLE exclusively in this week’s cover story. “I had to wait until I was pretty safely sober — and away from the active disease of alcoholism and addiction — to write it all down. And the main thing was, I was pretty certain that it would help people.”

Perry opens his memoir with the revelation that he almost died a few years ago at age 49.
Publicly acknowledging at the time that he suffered from a gastrointestinal perforation, the actor had actually spent weeks fighting for his life after his colon burst from opioid overuse. He spent two weeks in a coma and five months in the hospital and had to use a colostomy bag for nine months.

When he was first admitted to the hospital, “the doctors told my family that I had a 2 percent chance to live,” he recalls. “I was put on a thing called an ECMO machine, which does all the breathing for your heart and your lungs. And that’s called a Hail Mary. No one survives that.”

Candid about his relapses — he has been to rehab 15 times over the years — Perry has become well-versed on the tools necessary to maintain sobriety. “I’m pretty healthy now,” he says, before joking, “I’ve got to not go to the gym much more, because I don’t want to only be able to play superheroes. But no, I’m a pretty healthy guy right now.”

While he prefers not to disclose how long he’s currently been sober, he does still count each day. “It’s important, but if you lose your sobriety, it doesn’t mean you lose all that time and education,” he says. “Your sober date changes, but that’s all that changes. You know everything you knew before, as long as you were able to fight your way back without dying, you learn a lot.”

He also has his scars: He’s had 14 surgeries on his stomach so far. “That’s a lot of reminders to stay sober,” he says. “All I have to do is look down.”

His impetus to stop taking drugs? “My therapist said, ‘The next time you think about taking Oxycontin, just think about having a colostomy bag for the rest of your life,’” Perry recalls. “And a little window opened and I crawled through it and I no longer want Oxycontin anymore.”

Matthew wrote in the book, “if I did die, it would shock people, but it wouldn’t surprise anybody.” There were seasons of Friends that Matthew didn’t look well and you knew something was off. Following his admission of an Oxy addiction, speculation followed him every time his look changed. I always took his word for it when he said he was sober. But going to rehab 15 times tells me he struggled a lot more than I knew. I also didn’t realize alcohol was such a big part of his addiction, but it predates his issue with opioids. He was starting to have a dependency on booze when he started Friends.

The night Matthew went to the hospital and was put on the ECMO machine, he said five people were put on ECMO machines that night, but he was the only one who lived. He sees that as his call to help others. We know that Matthew turned one of his homes into a recovery house for addicts and has mentored addicts as well. He clearly wants to beat this demon and I believe he wants to help others beat it. I hope he’s really has gotten there this time.

People added this at the end of their article so I will include it too: If you or someone you know is struggling with substance abuse, please contact the SAMHSA helpline at 1-800-662-HELP.