After the devastating news last week of the Supreme Court overturning Roe v. Wade, Meghan Markle and feminist icon Gloria Steinem were tapped by British Vogue to help try and make some sense of it all. In a candid conversation, the two women discussed their reactions to the news, their personal experiences with pregnancies, and what’s to come in the fight for reproductive justice.

The duchess opened up about her own journey to motherhood when asked her thoughts on normalizing abortion. “I know what it feels like to have a connection to what is growing inside of your body,” she said. “What happens with our bodies is so deeply personal, which can also lead to silence and stigma, even though so many of us deal with personal health crises. I know what miscarrying feels like, which I’ve talked about publicly. The more that we normalize conversation about the things that affect our lives and bodies, the more people are going to understand how necessary it is to have protections in place.”

She went on: “This is about women’s physical safety. It’s also about economic justice, individual autonomy, and who we are as a society. Nobody should be forced to make a decision they do not want to make, or is unsafe, or puts their own life in jeopardy. Frankly, whether it’s a woman being put in an unthinkable situation, a woman not ready to start a family, or even a couple who deserve to plan their family in a way that makes the most sense for them, it’s about having a choice.”

Meghan also talked about the fact that “men need to be vocal in this moment and beyond” since the news also impacts them—and considering, you know, how pregnancy isn’t possible without them; they have a responsibility here too. “These are decisions that affect relationships, families, and communities at large,” she said. “They may target women, but the consequences impact all of us. My husband and I talked about that a lot over the past few days. He’s a feminist too.” 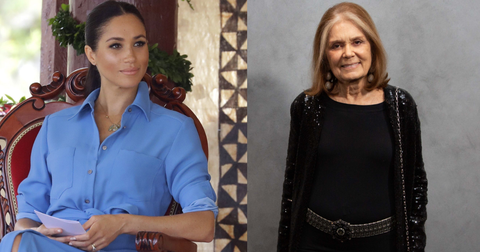 Gloria echoed this sentiment about Prince Harry, noting that she’s sat in big, important meetings alongside him and watched as he was “advocating for people’s rights.”

“His reaction last week [to the Roe reversal] was guttural, like mine,” responded Meghan. “I know that for so many women right now, there is a sentiment of despair. But again, we have to band together and not wallow. We have to do the work.”

As far as what’s next in her and Gloria’s action plan, Meghan alluded to them hitting Washington, D.C. to get the Equal Rights Amendment enacted into law,

“Without question [I want to help make the ERA’s passage happen],” Meghan said. “Being home, seeing what’s happening in our country and feeling energized and motivated, if this is the type of legislation that we need pushed through, then this is a moment that I am absolutely going to show up for. Not just because it’s what we need as women, but it’s what we need as people.”

“Well, Gloria, maybe it seems as though you and I will be taking a trip to D.C. together soon,” Meghan quipped.