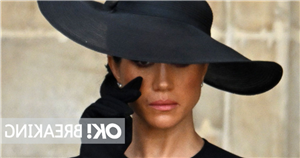 Meghan Markle was seen overcome with emotion as she joined members of the royal family at the State Funeral for Her Majesty Queen Elizabeth II at Westminster Abbey on Friday.

The Duchess of Sussex was seen wiping a tear from her eye in emotional pictures as the procession left Westminster Abbey for Wellington Arch while members of the royal family watched on.

The Queen Consort, the Duchess of Sussex, the Princess of Wales and the Countess of Wessex were seen looking sombre as the King and his siblings marched off.

Prince George and Princess Charlotte stood in front of their mother, with George looking directly at the coffin as it passed.

Sporting black gloves, Prince Harry's wife dabbed her eye as The Queen’s coffin, followed by the King, the Prince of Wales, the Duke of Sussex, Duke of York and the Princess Royal, began its procession towards Wellington Arch after it was placed back onto the State Gun Carriage.

The Queen’s funeral drew to a close with a lament played by The Sovereign’s piper and her coffin has been carried from Westminster Abbey to be placed on the State Gun Carriage.

The strains of the lament, ‘Sleep, dearie, sleep’, could still be heard echoing through the abbey as the piper walked off.

Shortly after, as the organist played Bach’s Fantasia in C minor, soldiers of the bearer party entered from the South Quire Aisle.

As the bearers moved slowly through the abbey to place the coffin once more on the gun carriage, they were followed in procession to the Great West Door by The King and Queen Consort along with other members of the Royal Family.

Harry and Meghan, who reside in America, travelled to the UK before the Queen’s passing and extended their trip as a result of her death, meaning they’ve been in the country for all of the monarch’s memorial services – including her funeral today.

Meghan was pictured travelling to the funeral at Westminster alongside her husband Harry, and wore an all-black ensemble for the sombre affair.

The former Suits actress wore her dark tresses up in a low bun, perfectly showing off her pearl earrings that were a nod to the Queen. Pearls are famously a symbol of mourning in the Royal Family.

Her choice of jewellery today comes after she made a similar sign of respect the late monarch by wearing a pair of earrings that she was gifted by her husband’s grandmother.

The pearl earrings were given to her shortly after she married Prince Harry in 2018. She wore the earrings for a solo engagement with the Queen in June of the same year.

Kate Middleton did the same with her jewellery choices as she wore a stunning Diamond and Pearl Leaf brooch which has previously belonged to the Queen.

Mum-of-three Kate first wore the stunning brooch back in 2017, during a visit to Belgium with her husband Prince William, 40, for the Commonwealth War Graves Commissions' Tyne Cot Cemetery.

Kate also wore it in 2018 for the annual Festival of Remembrance at Royal Albert Hall.

The brooch, which features a trio of pearls, was worn by Elizabeth II on her 73rd birthday in 1999, according to The Court Jeweller.