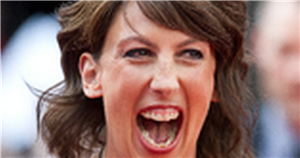 Miranda Hart has hinted that her wildly successful BBC sitcom could return after six years.

The comedian's eponymous programme was an instant success after it first aired in 2009 on BBC2 before moving to BBC1 in 2012 for three years.

And when asked about a reboot with her co-stars, Tom Ellis and Sally Phillips, the 49 year old said: "I do think of them from time to time, a bit like you would a friend that you haven't seen for a while, 'Oh, what would they be up to…'

"And so I've definitely had some thoughts of where they might be and what would happen with them all," Miranda added. Speaking on The Gaby Roslin Podcast, Miranda continued: "The circumstances haven't quite aligned. But it is something that I would say that I'm now not ruling out."

Speaking about the love for the show, she added: "The audience has continued to grow because young audiences can watch it and… I just love sitcoms.

"I believe in the importance of laughter even more than when I started out in my comedy career, so I'm definitely thinking about it.

"Hopefully, the circumstances will align one day," she added.

The final episode of the sitcom in 2015 saw Miranda and her on-screen lover Gary Preston – who is played by Tom Ellis – jet off into the sunset after they tied the knot.

The beloved show won big at major awards ceremonies, including the Royal Television Society awards for three years from 2009.

However, back in 2018, Miranda was quick to shut down speculation the show was returning.

The star tweeted at the time: "Don't know where this came from, it's news to me. Have thought about it, but that's all. And how many times – wasn't ill was busy elsewhere.

"To confirm … I don't know where it came from that there's a new series of Miranda. I write & play her & she's still on honeymoon!"

She did insist she was "glad" fans supported her and were keen to see her reunite with fellow co-stars for another instalment.

"Am glad people like the idea of us doing more. Gary and alter ego are still in the first flush, we need to give them some space!!"