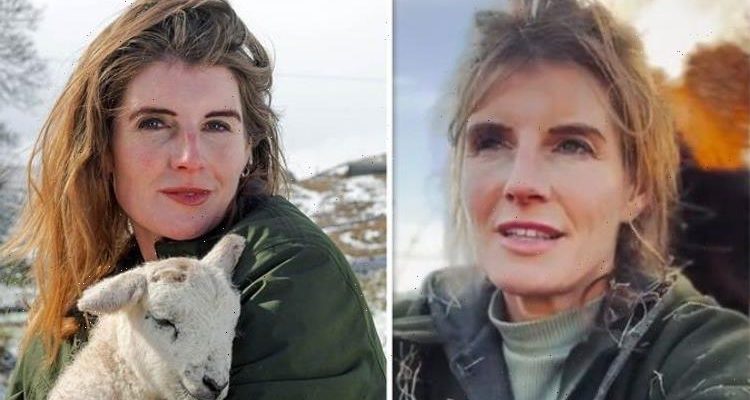 Amanda Owen chats away as she films her winter walk

Amanda Owen, 47, has revealed something she has found that she lost last Christmas. The shepherdess took to Twitter to share her concerns in view of her 186,600 Twitter followers.

we have found the giant Toblerone.

She penned: “After a year of intermittent lockdowns, isolations, a week cut off with no electricity, water & consuming peasant food cooked over an open fire we have found the giant Toblerone that we got for Christmas last year !!!! #christmas #chocolate #FFS.”

Amanda attached a picture of the chocolate Toblerone hidden in the large clock.

Many social media users took to the comments to laugh at the discovery.

Jewelleigh21 said: “Fun fact. Best before are only a rough guide. Usually if it looks okay and smells okay it should taste and be okay.”

Catemccarron added: “Wow! Hope you can enjoy it now. How on earth did you all forget about it?

“I’m the youngest of 8 – don’t think it would have lasted in our house.”

Penny48596709 commented: “Oh yummy, love its hiding place. I bought one for Christmas, and then one desperate evening, ate it, and had to buy him another one.”

Amanda recently left her fans concerned as she detailed an accident her daughter Nancy had on Christmas Day.

The shepherdess revealed that her daughter Nancy had unfortunately “swallowed a biro”.

Although Amanda was quick to clarify that her daughter was “fine; just spitting ink”, many of her fans were quick to express their concerns for the youngster in the comments section of her tweet.

The mum-of-nine shared the update alongside a gallery of photos of her children getting on with some tasks at Ravenseat Farm, which was covered in a dusting of snow.

Amanda listed the issues the family had faced throughout the day alongside the pictures, writing: “The usual. Skidsteer won’t start

“Sid abandoned the loft as he knocked the ladder away with a straw bale.

“Clem,Annas & Tony are sharing mineral lick (for Tony) in the living room & Nancy’s swallowed a biro.

Amanda’s followers rushed to the tweet to ask if Nancy was okay following her mishap with the pen.

Lottie Mills wrote: “A biro? That’s scary! Did she bite it or something?! Hopefully she’s still okay, bless her.”