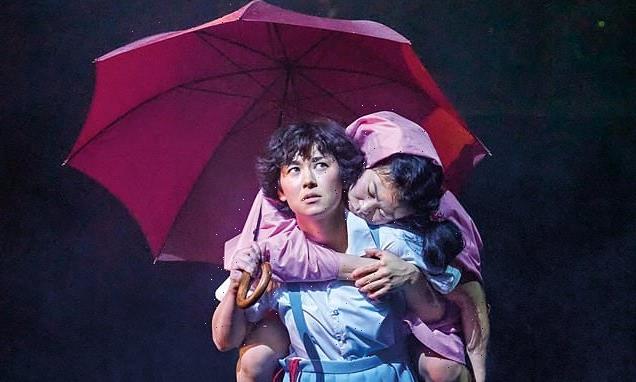 Psst! A big cuddly surprise in this sugar-rush of a show: PATRICK MARMION reviews My Neighbour Totoro

It’s based on Hayao Miyazaki’s animated cult film about a family in 1950s Japan who move to the countryside to be near the mother who’s convalescing in a hospital.

The unique selling point of the 1988 movie was the giant, forest-dwelling ‘Totoro’ creature who helps four-year-old Mei and big sister Satsuki come to terms with their mother’s illness.

Although we first meet its Minion-sized offspring scuttling nervously in and out of holes, their giant progenitor is like a furry beached whale on which Mei jumps as if on a bouncy castle. The Barbican audience melts on sight like lollipops in the sun.

To watch, it’s certainly amazing. Puppetry performed by a mostly Japanese company wearing black beekeeper suits is a ballet unto itself.

We start in the family’s new haunted house with flying ‘soot sprites’ that look like fluffy spiders. But in addition to the lumbering and laughing Totoro, a huge inflatable illuminated ‘cat-bus’ with searchlight eyes swings by to transport Totoro and the girls wherever they want. 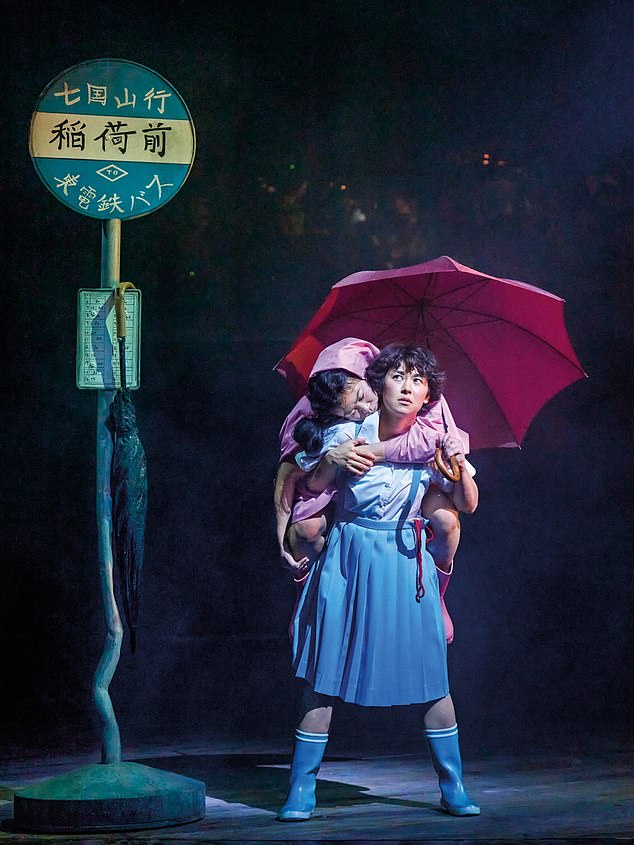 The unique selling point of the 1988 movie was the giant, forest-dwelling ‘Totoro’ creature who helps four-year-old Mei and big sister Satsuki (pictured together) come to terms with their mother’s illness

The show has charm to burn, thanks also to an ankle-blizzard of puppet hens at the neighbour’s farm. And Joe Hisaishi’s score mixing Japanese pop and Western classical traditions is performed by a band in treetops silhouetted by a massive rising sun, while ethereal serenades sung by Ai Ninomiya cover long scene changes.

The trouble is that over almost three hours, there’s much more pomp than plot.

We must also abandon hope of anything like complex characterisation thanks to an immaculately good-natured dad (Dai Tabuchi) and his two girls — sparky young Mei (a rubber ball Mei Mac) and her thoroughly responsible older sister Satsuki (Ami Okumura Jones).

McDermott tells us in the programme that the story has a different, non ‘patronising’ view of time. But adding an extra hour to the length of the film makes this otherwise delightful show an ultra-slow-release sugar rush. No one’s asking for car-chases (although we sort of get one), but am I alone in wishing to have been patronised by something shorter?

Almost as lovely is Marvellous, a staging of the life of North Staffordshire man of the world Neil Baldwin. Outside Stoke City Football Club, the life story of the Alex Ferguson lookalike is best known from his autobiography and the BBC film starring Toby Jones. 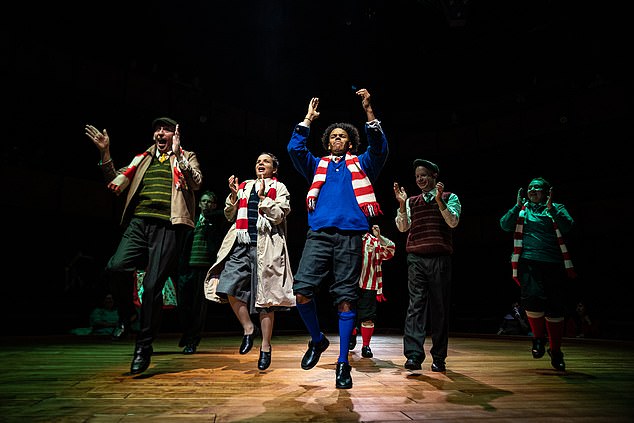 Almost as lovely is Marvellous (pictured), a staging of the life of North Staffordshire man of the world Neil Baldwin

Born with learning difficulties in 1946, Baldwin longed to study theology at Keele University and become a priest, but became a self-appointed fixture at the university, meeting and greeting students over 60 years. In between times he ran to and from the circus performing as a clown, and was appointed Stoke City’s kit-man.

More sophisticated shows will follow, but until then Michael Hugo’s ‘Nello’ is perhaps even better than Toby Jones in the film, as he guides the other six actors through his life story, proudly sporting a British Empire Medal on a loose grey suit, blissfully untroubled by reality.

Just as good is Suzanne Ahmet as Neil’s devoted Mum.

Thanks to her and his underplayed devotion to the church, Baldwin considered himself capable of running for PM.

And on current evidence who would doubt him?

You may feel tempted to dust off an old wooden tennis racket, snap a sweatband on your head and play air guitar to Mark ­Knopfler’s folksy reinvention of Bill ­Forsyth’s cult film.

It’s the one about Texan oil exec, Mac, who’s hoping to buy a sleepy village in the Western Isles to build a refinery for his boss (played by Burt Lancaster in the 1983 movie).

The musical adaptation was first seen in Edinburgh in 2019 and was meant to ­transfer to London’s Old Vic in 2020.

We all know what happened next, but I suspect Covid may have been kind to the show because Daniel Evans’s farewell production in Chichester, before he takes charge of the Royal Shakespeare Company next year, is a great improvement. That’s thanks also to a terrifically warm turn from American Gabriel Ebert as Mac and Paul Higgins as local fixer, Gordon — roles ­originally played by Peter Riegert and Denis Lawson.

With the audience gathered around a ‘thrust’ stage, it’s easier to feel part of the remote Scottish community whose dreams of selling their souls look destined to be ­fulfilled. Frankie Bradshaw’s set design is also more high-tech, looking like a chrome space station aglow with sunsets and Northern Lights.

But the stage also neatly converts into the beach of the story’s battleground, while the film’s famous red phone box fed by 2p pieces sits nearby at a rakish angle.

Although played here with all the fizz of an electric Ceilidh, I’m not sure Knopfler’s score entirely possesses the story.

Yes there is that distinctively Knopflerian twang inherited from The Shadows. And yes there is amusement in songs like We’re Going To Make A Killing, plus the ­melancholy of (Only) Rocks And Water, not to mention the Celtic lilt of I Wonder If I Can Go Home Again (reminiscent of the Irish folk song A Man You Don’t Meet Everyday).

But the story’s trump cards remain not just it’s heart-warming plot, but also its sharply drawn characters deftly translated by David Greig. Ebert is a handsome Texan wearing a sharp silver suit and fine moccasins. Controlled by a bleeping wrist watch, his need for change (and not just for the phone) is as credible as his stage presence is palpable.

Higgins too is in his element as the multi-tasking local accountant, lawyer and hotelier who tries to broker a deal. And while Hilton McRae is everyone’s fantasy of an elderly beach comber who’s as old as the peat bogs, eco-resistance is more ­formidably supplied by Lillie Flynn as the sort of feisty Glaswegian who’s most safely encountered in fiction.

Not just good for eco-warriors and ­Scottish Nationalists, it’s a Highland reel for nostalgics of every stripe.

The 1951 crime caper, starring Alec Guinness and Stanley Holloway, was one of the most successful Ealing comedies, and now Phil Porter has adapted it for the stage. Miles Jupp plays Henry Holland, a Bank of England employee responsible for transporting gold bullion from the Royal Mint to Threadneedle Street, while Justin Edwards is Alfred Pendlebury, who owns a foundry making cheap souvenirs.

When Holland meets Pendlebury he sees his chance to longer be a ‘nonentity’ of 20 years’ loyal service, but to have a new life, flush with money, in Rio de Janeiro. That’s where we find him when the play opens on New Year’s Eve 1949, drinking with other ex-pats in the Union Club when the mysterious Mr Farrow (Guy Burgess) walks in.

In the film Holland recounts to Farrow how he got to Rio but Mr Porter – who throws in some good gags, including a corker about a French seagull – uses the clever framing device of having Holland’s fellow partygoers act out his story.

They tell the complicated tale of a staged bullion robbery, melting it down into Eiffel Tower paperweights, Holland and Pendlebury going to Paris to fence them, then having to track down the English schoolgirls who were mistakenly sold gold rather than lead versions, and a chase through wartorn London involving a stolen police car.

And this is where the stage version, directed by Jeremy Sams, comes a bit of a cropper. In a crime caper there needs to be some capering but Mr Jupp and Mr Edwards’ capering looks rather more like lumbering on Francis O’Connor’s fussy set. Other cast members, including Tessa Churchard and Victoria Blunt (as party guests playacting as the men’s accomplices) are rather more light on their feet but the production, while featuring two jolly and talented leads, needs more zip to reach the comic heights of the original.

Until October 22, then touring until February 18 2023 (lavenderhillmobplay.co.uk)

Verdict: For once the magic really works

We go to La Boheme in the hope of encountering the ideal combination of tenor and soprano — Caruso and Melba, perhaps, or Pavarotti and Freni — for whom Puccini reserved all his best music.

For this revival, Covent Garden has found a Rodolfo, the great Peruvian tenor Juan Diego Florez, who sings his romantic phrases as if he really believes in them, and a Mimì, the lovely American soprano Ailyn Perez, who embodies the word ‘adorable’.

We have generally seen Florez in lighter fare. He may not command the opulence of a Caruso or a Gigli, but the middle of his voice has filled out a little and he retains his pinging high register, enabling him to sing ‘Che gelida manina’ in its original key.

Perez’s Mimì is a known quantity, yet faced with a poet who is so ardent and sympathetic, she blooms even more than usual, so that her collapse into consumptive illness and distress is doubly shocking.

The two of them have a third partner in the German conductor Kevin John Edusei, making his ROH debut, who knows how to mould the orchestra so that it supports the lovers one moment and enwraps them the next.

Danielle de Niese’s outrageous portrayal of Musetta gets better every year. One moment she is the guest from hell at the Café Momus, the next she is demonstrating that even if she is a bit of a tart, she has plenty of heart.

The other three Bohemians can muster plenty of voice. As Marcello, Andrey Zhilikhovsky needs to cultivate much more light and shade. Ross Ramgobin as Schaunard is suitably extrovert and Michael Mofidian creates a touching effect with his Coat Song.

Richard Jones’s production is so good, most of the time, that its few lapses are all the more regrettable — I shall not bore Mail readers by enumerating them yet again. He gives the singers of small roles a chance to shine and the chorus is well deployed.

The company has lined up two more casts, very promising on paper, but if you can possibly get to hear this first line-up you will be amply rewarded. When this hugely popular opera works, it really works.