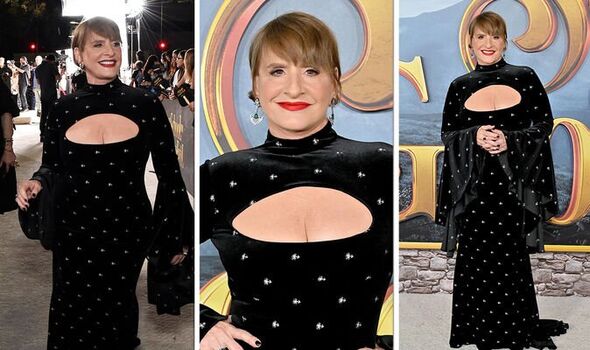 Patti LuPone dazzled fans and co-stars in a stunning dress as she arrived at the premiere of her latest film, The School for Good and Evil.

Patti LuPone dazzled fans and co-stars in a stunning dress as she arrived at the premiere of her latest film, The School for Good and Evil.

The age-defying Broadway legend, 73, smiled for cameras while turning heads in a skintight, floor-length black gown, featuring a racy cut-out section at the bust.

Patti’s new fantasy film follows a star-studded cast as two friends find themselves enrolled at separate schools, one for heroes and one for villains.

The Tony winner appeared at the premiere just a day after announcing on Twitter that she had pulled out of the Actors’ Equity Association, which is a labour union for professional theatre actors.

Talking to press on the carpet, Patti put her fans’ fears over the sudden move at rest, revealing that she will not be ditching the stage for the screen entirely.

The Broadway veteran explained she would still strut theatre stages as a non-Equity member, and told USA Today: “I’ll never not act on stage.”

Her latest starring role in the Netflix film, alongside Hollywood A-listers including Laurence Fishburne, also proves the actress has no plans to retire after almost half a century in the industry.

Patti LuPone boasted her ageless looks at the premiere

She arrived at the Los Angeles premiere of The School for Good and Evil on October 18.

The new Netflix film is based on Soman Chainani’s book of the same name.

Fans were overjoyed as the actress stopped to take photos, sign autographs and talk to the crowds.

The 73-year-old flaunted her ageless appearance and batwing sleeves.

The Queen of Broadway wowed with her iconic hair and makeup

The actress sported her iconic pixie-cut hair with gentle bangs and red-hot lipstick.

The School for Good and Evil has a star-studded cast