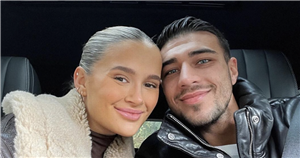 Molly-Mae Hague has shared a sweet thing boyfriend Tommy Fury did for her, as the couple prepare to welcome their first child.

The couple, both 23, met on Love Island in 2019 and have been keeping fans closely updated on their life ever since.

They’ve gone from strength to strength, buying their dream home together, announcing their pregnancy and now waiting for their little one to arrive.

Taking to Instagram on Thursday morning (3 November), Molly-Mae shared a photo of a breakfast surprise from her boyfriend with the caption: “This mornings surprise. Love you @tommyfury”.

The photo shows a bouquet of white, pink and red roses, a smoothie and a croissant on her dressing room table. In early October, the star revealed that she was six months pregnant, meaning there isn't long to go until her and Tommy become parents.

However the influencer, who is expecting a baby girl, has also shared how she won't be revealing her due date to fans.

Last month, she took to her YouTube channel to document her pregnancy journey so far and told fans how far along she was.

The TV personality and fashion mogul said that the most common question she’s been asked about her pregnancy is when her baby is due, however she is in no hurry to share this.

She said: “It's just not something I'm going to share. From around my videos you guys are definitely going to work out around the time my baby is due.

“I feel like sharing dates and stuff, anything can happen.”

Answering this question on Instagram the mum-to-be wrote: “Strangely… no. It wasn't. I set myself a goal to get to five months without people knowing and I really didn't think I would get that far… but we actually went past that point!

“It was so special having it as mine and Tommy's secret – I also have some amazing secret keeping friends / family too.”

Molly previously revealed that she would choose something unusual as her child's moniker, saying: “No one in my child's class is going to have the same name as them. I already have names in mind that I know everyone is going to hate, and I just can't wait for it.”