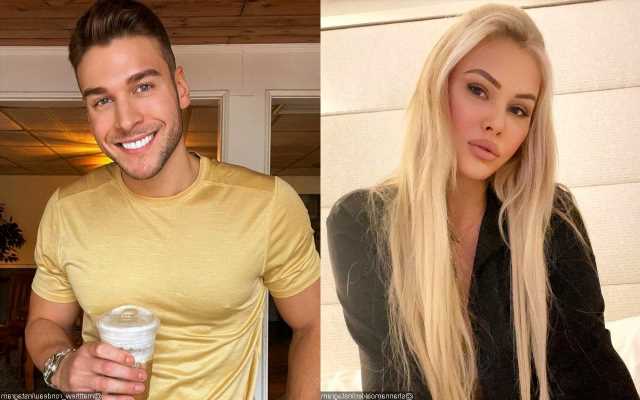 Less than two weeks after revealing her pregnancy following her ex-boyfriend’s arrest, the former Miss USA is spotted enjoying a dinner date in Rhode Island’s Opa Restaurant with him.

AceShowbiz –Shanna Moakler is seen with Matthew Rondeau for the first time since his domestic violence arrest. The former Playboy Playmate, who recently announced her pregnancy, was caught on camera enjoying a dinner date with her ex-boyfriend.

On Sunday night, March 13, the former Miss USA and her former lover were spotted in Rhode Island’s Opa Restaurant. In a photo obtained by TMZ on Monday, the exes, who were also seen together in Providence on Saturday night, could be seen sitting next to each other.

A source told the outlet that Shanna and Matthew stayed late at the restaurant and left the eatery around 1 A.M. The eyewitness then noted that they weren’t showing any signs of affection during the meal. At one moment, the 46-year-old mom of three was overheard telling a visitor, “We’re okay, we’re hanging in there.”

The sighting arrived less than two weeks after Shanna revealed that she’s having a bun in the oven. Earlier this month, the season 3 star of “Celebrity Big Brother” told PEOPLE that she took a pregnancy test and the result came back positive. She added, “This has been a very difficult week, but I’m taking everything day by day.”

Days before Shanna opened up about her pregnancy with her fourth child, her ex Matthew said that he refused to fix their relationship. “I will never speak to her after what she is putting me through,” he said, referring to the backlash that has followed him after his arrest, “Would you go back to someone who put you through this for fame?” He even admitted that he had blocked her from contacting him via phone and social media.

Following the allegations, Matthew said that he and his family are receiving death threats. He unveiled that strangers are saying “the worst things” to him and those related to him. He went on to tell the outlet that he’s going to “need therapy” for all the “trauma” he’s going through over the alleged crime he insists he “did not commit.”

Matthew, who previously publicly shamed Shanna on Instagram, was taken into police custody on February 24 following his alleged physical altercation with Shanna. The domestic violence arrest came after he had an argument at Shanna’s home due to her alleged infidelity.

“[Matthew] grabbed victim by the hair, [swinging] her by hair on the ground,” a police officer detailed the incident in a statement to Us Weekly. The police officer then noted that Matthew later “grabbed [Shanna’s] face and neck, threw chair at victim and urinated on [her], leaving visible injuries.”