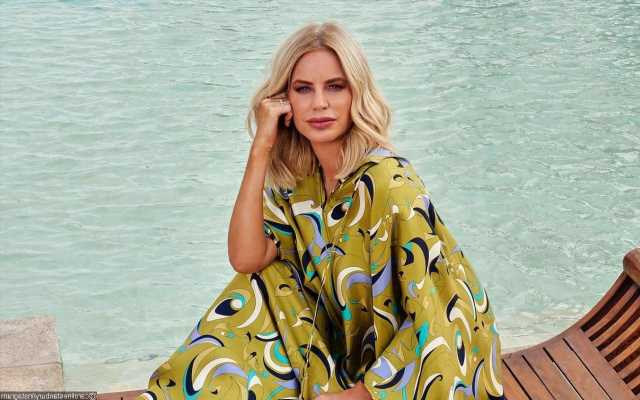 Taking to her Instagram Story, the reality TV star reveals that their vacation home was burglarized on the first night of her trip in Mykonos alongside husband Sergio Carrallo and daughter Yasmine.

AceShowbiz -“The Real Housewives of Dubai” cast member Caroline Stanbury had a not-so pleasant experience while vacationing in Greece. Taking to her Instagram Story, the reality TV star revealed that their vacation home was burglarized on the first night of their trip.

“so …. having set off on our holiday and landing within 3 hours we were robbed,” Caroline, who went to Mykonos alongside her husband, former Real Madrid player Sergio Carrallo, and her daughter Yasmine to celebrate the 16-year-old receiving her General Certificate of Secondary Education, wrote on her Instagram Story on Saturday, June 25.

Noting that the vacay “turned into a nightmare,” the 46-year-old added, “we came home to the men still in our house.” The Peacock personality added that while the thieves stole “so much,” her loved ones were all safe. She also treated fans to a video of their suitcases and luggage items wide open with various clothes and accessories thrown everywhere and scattered across rooms.

Sergio also explained the incident on his own page. “it was so scary that I can’t express it,” the 27-year-old wrote on his own Instagram Story. “This is the f**king problem with the society and people.. and why the world is becoming this way.”

Later on Monday, Caroline detailed the events to PEOPLE. She shared that their rental house was “in the middle of nowhere” and had no cell phone service or security system. Thus, they decided to move to another property. When she and Sergio returned from dinner to get their bags and move to a different villa around 11:30 P.M., that was when they discovered a chilling scene.

“I was laughing with Sergio that it was so remote. It’s such a scary place to go. But I was like ‘What if someone’s in the house?’ Can you imagine? No one would hear us,” she recalled saying. “And he opened the door and went ‘boo’ to make me scared as a joke.”

The former “Ladies of London” cast member went on to divulge, “All our bags that we had left by the door to move were open all over the floor.” They “realized that there was someone still in the house” when they saw lights on upstairs. She admitted that it was the “scariest part.”

She immediately called police and went back up with the authorities. According to her, their cameras, jewelry and all of Stanbury’s bags were gone with one special item in particular missing. “They took my husband’s wedding ring, which he’s absolutely destroyed over,” she added. Despite that, she’s grateful that “everyone’s fine.”