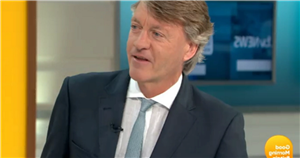 Richard Madeley appeared to reveal a snippet of new information about Piers Morgan's Good Morning Britain exit as he guest-hosted the ITV show alongside Charlotte Hawkins on Thursday.

The 65 year old alluded that Piers had plans to leave the breakfast programme for a period of two months before his shocking exit back in March.

Discussing his return, the excited broadcaster, whose last appearance on the show was in March 2020, told his co-host: "I was meant to come back in April and May because Piers was meant to be going to America.

"So I would have been sitting alongside you quite a lot then, but all that went west, and here I am."

Richard did not make it clear whether he was referring to April and May of this year or last year.

Piers dramatically left Good Morning Britain in March after refusing to apologise for stating that he didn't believe Meghan Markle's claims that her mental health had suffered during her time in the royal family.

Following the likes of Bill Turnbull and Alastair Campbell, Richard is just the latest guest star to fill Piers' seat while bosses search for a full-time replacement.

In an interview last month, Richard admitted that he was ready to step into Piers' old role at Good Morning Britain because the show "suits" him.

He told The Sun: "Good Morning Britain, it's a good show to do. It suits me and, yeah, I think I suit it."

But he added: "I have had no approach at any level formally or informally. The phone hasn't rung, I haven't had a ping into my inbox.

"I'll go in, I'll fill in, I'll enjoy it, and I hope they ask me back. But in terms of sitting in for Piers, it's a completely open question."

Richard, who spent 13 years co-hosting This Morning with his wife Judy Finnigan and eight years presenting chat show Richard & Judy, said that he didn't "have a career plan" and only wanted to choose jobs that looked like fun.

He said that he didn't feel he had "anything else to prove" after a successful career with Judy and added that if he was younger, the potential to take Piers' old job would mean more to him.