England’s late Princess Diana will be commemorated with a statue, the unveiling of which will take place on July 1, People reported. Her sons, Prince William and Prince Harry, who may or may not still be feuding after the latter’s royal resignation in 2020, will reunite for the first time since April, when Harry returned for their grandfather Prince Philip’s funeral. The statue, commissioned by the two princes, will reside in Kensington Palace’s Sunken Garden, where the unveiling ceremony will be held.

Plans for Diana’s statue were first announced in 2017. In a joint 2020 statement on behalf of Harry and William, the palace stated the statue was “commissioned to mark the twentieth anniversary of her death and recognize her positive impact in the U.K. and around the world” (via Town & Country). Its unveiling also deliberately takes place on the Princess of Wales’ would-be 60th birthday. As their official statement read, Harry and William “hope that the statue will help all those who visit Kensington Palace to reflect on their mother’s life and her legacy.”

Interestingly, the princes chose sculptor Ian Rank-Broadley, the creator of the iconic image of grandmother Queen Elizabeth II that graces all British coin currency, People related. Let’s take a look at other members of the British royal family who hold the honor of having statues in their likeness.

The British royals all have wax statues at Madame Tussauds 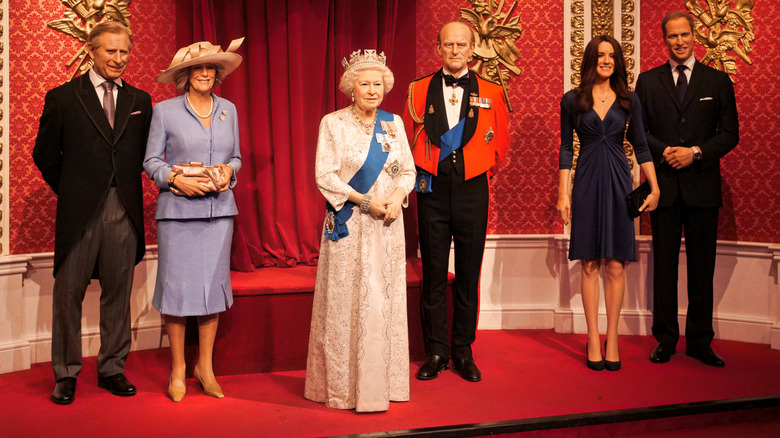 A British royal with statues worldwide due to England’s many colonies, Queen Elizabeth II was presented virtually with her latest in Adelaide, South Australia in February, USA Today reported. The remarkably detailed bronze statue impressed Elizabeth herself, who gave her humorous nod of approval on a video call with South Australian Governor Steven Marshall. “It must be quite alarming to suddenly see it out of the window,” the monarch quipped.

Elizabeth’s parents, King George VI and the Queen Mother, are two other British royals to have received this rare (non-wax) honor. In London’s St. James Park stand their bronze memorials, close to one another, with Elizabeth unveiling her father’s in 1955 and her mother’s in 2009. The legendary Queen Victoria and her husband, Prince Albert, were another iconic royal couple with their own memorial statues. Anyone who has seen photos of Buckingham Palace has probably spotted Victoria’s 82-feet tall marble masterpiece (with golden angels topping it off), while Albert’s bronze-and-marble Kensington Gardens monument features him sitting under a lavishly constructed pavilion.

Of course, there are the famous Madame Tussauds London’s wax renditions of the royal family. In addition to Elizabeth, Prince William, Kate Middleton, Prince Charles, and Camilla Parker-Bowles’ exquisitely carved displays, ex-royals Prince Harry and Meghan Markle had their doppelgängers moved following their 2020 resignation to New York, per ABC News. That sounds like a bit of a silent jab to us!