We have seen many times that actors getting injured while making their shot perfect in the film. Recently, Vicky Kaushal got injured while filming an action sequence and got stitches. Now, gorgeous actress Shraddha Kapoor, who is shooting for Street Dancer 3D suffered a muscle spasm on the sets of the film. The Baaghi star shared an insta story, where she is taking massage from physio Maheek Nair and wrote, “Releasing the muscle spasm”. 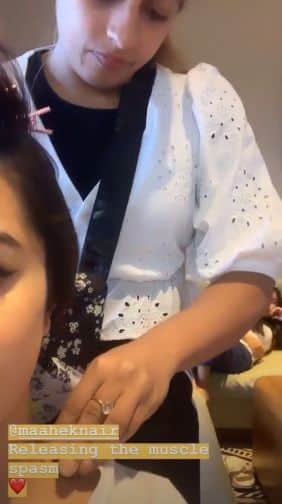 Talking about Street Dancer 3D, it is directed by Remo D’Souza and also stars Varun Dhawan, Prabhudheva, Nora Fatehi, Sonam Bajwa, Shakti Mohan, Vartika Jha, Dharmesh Yelande, Punit Pathak and Raghav Juyal in key roles. The film will be shot in 3D and converted to 4DX later. The film is scheduled to release on January 24 and will clash with Kangana Ranaut’s Panga at the box office.

Meanwhile, she will be next seen in Prabhas starrer Saaho. also has an ensemble cast of Jackie Shroff, Neil Nitin Mukesh, Mandira Bedi, Chunky Pandey, Mahesh Manjrekar, Arun Vijay and Murali Sharma, amongst others. The film is being shot in Hindi, Tamil and Telugu simultaneously. It promises to provide a pan-India appeal. Director of photography Madhie has lent his creativity to the film, with veteran Sreekar Prasad as the editor and Sabu Cyril as the production designer. A UV Creations production, the film will be presented by T-Series and its Hindi distribution is being taken care of by AA Films. It is scheduled to hit the screens on August 15 during the Independence Day weekend.

Anyway, are you excited about Street Dancer 3D? Tweet to us @bollywood_life