The Biden administration has done a lot since coming into office in January. President Joe Biden reversed dozens of executive orders made by former President Donald Trump, per CNN, while White House press secretary Jen Psaki has made headlines for bringing accountability and truthfulness back to the White House briefings. Of course, not everyone has been satisfied with the Biden administration and its policies. Trump has said that the current president “is destroying our nation” at a campaign rally this past June, according to NBC News, and he asked his supporters to support the Republican party in the upcoming midterms.

With the divide between the Biden and Trump administration becoming more apparent, it’s no wonder the Biden administration is making moves to remove members who served for Trump on national advisory boards. Kellyanne Conway, former senior counselor to President Trump, is among the members on Biden’s resignation list.

Find out why the Biden administration wants Conway to resign below. 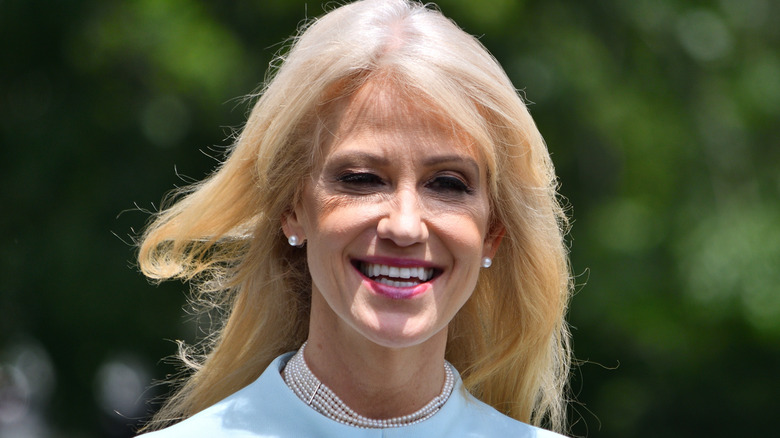 According to CNN, the Biden administration has told 11 officials appointed to military service academy advisory boards by former President Donald Trump to resign or “be dismissed.” Kellyanne Conway is among the 11 officials asked to resign for she was appointed to the Air Force Academy. Per the Air Force Academy website, military advisory boards were established to oversee the “morale, discipline, social climate, curriculum, instruction, physical equipment, fiscal affairs, academic methods, and other matters” relating to the country’s military academies, but Joe Biden does believe Conway and others from the Trump administration aren’t qualified for their roles.

In a White House briefing on Sept. 8, White House press secretary Jen Psaki confirmed that Biden had made the request. “The president’s objective is what any president’s objective is — to ensure you have nominees and people serving on these boards who are qualified to serve on them and who are aligned with your values. And so yes, that was an ask that was made,” Psaki told reporters, via CNN. She continued, “I will let others evaluate whether they think Kellyanne Conway and Sean Spicer and others were qualified, or not political, to serve on these boards, but the president’s qualification requirements are not your party registration, they are whether you’re qualified to serve and whether you’re aligned with the values of this administration.”

As of writing, Conway hasn’t yet responded to Biden’s request, but perhaps she’ll discuss her removal in her upcoming memoir.