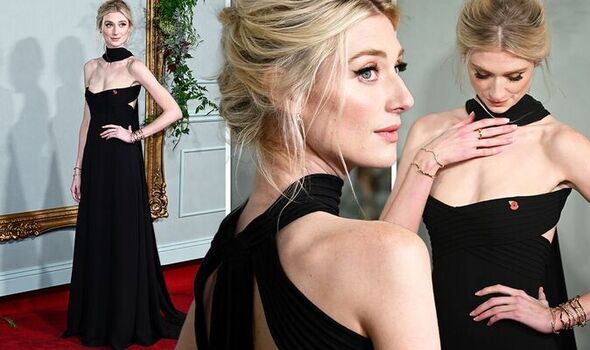 Elizabeth Debicki was sure to catch some eyes as she attended the Season 5 premiere of The Crown at the Theatre Royal Drury Lane this evening.

Elizabeth Debicki, 32, looked amazing as she attended the Season 5 premiere of The Crown at the Theatre Royal Drury Lane this evening.

The dress featured a black neck feature, which fell effortlessly down her dress and appeared as a trail.

Emily, who plays Princess Diana in the upcoming series of The Crown, channeled her inner royal as she wore a look similar to the late heiress.

Princess Diana wore a similar velvet black dress in November 1987 when she accompanied her then husband King Charles to an evening function in Germany.

Elizabeth Debicki made sure to style herself like a royal

Elizabeth Debicki showed off her inner royal as she oozed glamour in a floor length sleeveless black gown. The actress wore her blonde tresses up in a neat bun, not to take attention away from her simple yet elegant dress.

Elizabeth Debicki went for a natural make-up look, featuring winged eyeliner and a pink lip, making sure not to take attention away from her statement dress.

Elizabeth Debicki posed alongside her onscreen husband and children

Elizabeth Debicki plays Princess Diana in The Crown alongside Dominic West who has taken on the role of Prince Charles. Teddy Hawley and Timothee Sambor play a young Prince Harry and Prince William respectively.

Elizabeth Debicki has stuck up for The Crown in recent weeks

Elizabeth Debicki jumped to The Crown’s defence in recent weeks due to those who have criticised the show for fictionalising the royal family. Elizabeth has said that those watching the Netflix drama should know “it’s clearly fiction”. The show is expected to show a scene where King Charles, played by Dominic West, cuts a holiday short with Diana to host a secret meeting with Sir John at Highgrove in 1991 where they discuss ousting the Queen.

Elizabeth Debicki channeled her inner Princess Diana for the premiere

Elizabeth Debicki’s chosen attire for the evening looked very similar to a look Princess Diana wore in 1987 during a Germany trip with her then husband Prince Charles.

Netflix has put a disclaimer on The Crown to stop criticism

Netflix added a disclaimer to its marketing for The Crown, saying it is a “fictional dramatisation” after claims of insensitivity in some scenes to real-life situations.