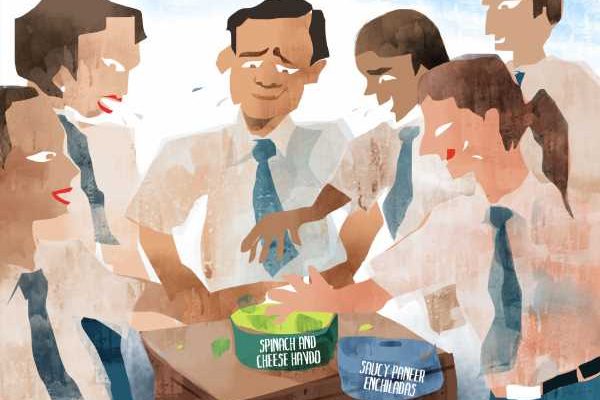 Each region in India has its own culinary narrative that speaks through its distinct dishes.
Each cuisine packs within itself, textures, layers, ideas and historical nuggets so that all of Indian food cannot be pigeonholed together to say that there is one Indian cuisine.
A fascinating extract from Sonal Ved’s Whose Samosa Is It Anyway?.

My curiosity to understand Indian cuisine began in the school canteen, my first exploration of food outside of home.

The house I grew up in wasn’t at all an ideal prototype to study the evolution of regional food. Like many urban Indian families, we were rooted in tradition — by way of Indian fasts and feasts — but an everyday meal at home was diverse, global and ahead of its time.

If there is one thing you should know about Gujarati families living in a metropolis in India, then it’s the fact that they gave up traditional cooking and moved to Tarla Dalal-inspired meals over two decades ago.

My school tiffin seldom came stacked with rotli, dal, bhaat and shaak, or as the cool kids called it, RDBS.

It was a neat show of saucy paneer enchiladas, falafel stuffed inside bajra pitas, baby corn idlis, cream cheese pinwheel sandwiches, spinach and cheese handvo, things that made my tiffin the most covetable item in class — actually the second, after the back bench during a post-lunch chemistry class.

Unless I visited cousins in the heart of Kutch or Saurashtra, my exposure to Gujarati food remained the rice flour pankis that I ate at Swati Snacks, a restaurant in Bombay known for ‘authentic’ Gujarati cuisine (David Chang ate here). But even those meals were tinted with flavours inspired by Bombay.

Occasionally, we ate hyper-traditional dishes, like a ghee-dotted bowl of dal dhokli followed by homemade shrikhand. Summers meant mango juice-based fajeto (sounds Mexican, but it’s not), and aam panha. Winters meant gud papdi, lilva ni kachori and undhiyu, and the fasting season meant lots of faraal food — and that was more or less what I understood about my own region’s cuisine.

In the nineties, when India was experiencing an Internet boom, my table started to look different. The aloo parathas that we ate so often at dinner were nonchalantly served with an Ottolenghi dip (vaal instead of white broad beans) and amla chutney dotted on Martha Stewart’s soft-shell tacos. Nigel Slater’s ice-cream base was used to make our annual aam ras tub.

So, to put it simply, the Ved kitchen was ever-evolving and was inspired by American-European influences before I was able to differentiate between what belonged to my ancestors and what we had been lugging along like Hailey Beiber and her Bottega.

Food at home left me with little matter to string together and understand what Indian food was all about before the various outside influences started accumulating over the course of time. My palate had always sought wanderlust. In school, I marvelled at my Sindhi friend’s tiffin that came brimming with macrolyun patata, or macaroni cooked in tomato gravy, which she ate with rotis; or at a Bohri friend’s malida, a wheat-based sweet dish of Afghani origin. And I wondered how this Marwari friend’s mom effortlessly made authentic khow suey that wasn’t inspired from any cookbook but was an heirloom family recipe.

My best friend, a Jain, though vegetarian on paper, skipped many vegetables. She taught me how to eat versions of potato-based dishes like pav bhaji, masala dosa and poha that did not have the root vegetable. And although I thank that experience for helping me understand the various shades of vegetarianism, I will never forgive her for making me try potato-less French fries. Yes, these were made of raw bananas.

Now that I think about it, there were many undercurrents that lay in all those school meals, those that differentiated Indian cuisine from other cuisines but also made it challenging for anyone to describe it in a line or two. I couldn’t do it then, so I am trying to do it now, and that is why Whose Samosa Is It Anyway? is 55,000 words.

As I began my research to understand the history of Indian cuisine, I had more questions than there were answers for.

Did the European traders come before the Arab conquerors?

Can you say cinnamon is an Indian spice even though it first grew in Sri Lanka on the Indian subcontinent?

What are the origins of the quintessential chutney and samosa, or of the fruit punch, and how are they connected to India?

Who taught us how to make ladi pav, and how did the Burmese khow suey land up on the wedding menus of Marwaris?

Experts who could answer my questions were spread across the world, and there were few books dedicated solely to this subject. As I set about to deep-dive into India’s culinary history, I realised that the process was not going to be linear. Ingredients and dishes didn’t show up in the Indian kitchen in a specific order or for a reason. They just did. Indian cuisine was layered, lacked chronology, and was tinted with myriad influences that I am just beginning to unravel.

The more I found out about the Indian kitchen, the more I realised that there is no such thing as a definitive Indian cuisine. Research papers, experts, historians and the Internet had a lot of data, but my attempt was to streamline these ideas and — if I got lucky — to make it readable for my readers.

While writing Tiffin, my second cookbook, which compiles 500 recipes from the 29 states and nine Union Territories of India, I had concluded that it was safe to say that there are as many hyper-local Indian cuisines as there are Indian states.

And even states that share borders, like Punjab and Haryana or Karnataka and Goa, have similarities and dissimilarities, some of which can only be observed if you look at their kitchens through a magnifying glass.

For each region in India has its own culinary narrative that speaks through its distinct dishes and kitchen staples. Sure, there were overlaps, but each cuisine packs within itself, textures, layers, ideas and historical nuggets so that all of Indian food cannot be pigeonholed together to say that there is one Indian cuisine.

As a starting point, I began to understand Indian cuisine by first determining the jarring points that separate our cuisine from another. Defining these factors that set it apart from another was a sweet spot around which I could gather my thoughts.

Even with the vast culinary diversities within regions, there were things that sewed them all together. Try and look at it as an intricate Sabyasachi lehenga. The lehenga may have mixed motifs, embroidery that doesn’t rely on any one kind of thread, prints that vary in size, and colours that go from deep dark to poppy bright from one end of the dress to another — but when you look at it as a whole, it is downright delicious.

The first striking feature is that Indian cuisine is based on an ancient civilisation. The Indus Valley and other civilisations — like those on the river Nile (ancient Egypt), the rivers Tigris and Euphrates (Mesopotamia), and the Yellow river (China) — are the oldest human clusters in the world.

This is to say that the first definitive chapter of Indian cuisine didn’t originate out of an industrial revolution or from religious influences, wars, cultural exchanges or migration patterns, as with many other cuisines, but out of the sheer need for man to eat and survive. And therefore, it would be silly to compare it with modern haute French cuisine, which came about only in the seventeenth century, or with the latter-day Nordic, American or Australian cuisines, a mistake some young Indian chefs commit while trying to identify a way forward for Indian cuisine, which is at least 4,000 years old.

As, comparatively, newer cuisines have definitive timelines, their methods of cooking are sophisticated and their techniques well documented. But early Indian cuisine, or even the food cooked in non-urban Indian homes today, is rudimentary. It uses methods that are ancient — with recipes that are often not documented — which were developed over eras and not just a few centuries.

Another landmark feature of Indian cuisine is the use of spices. A discussion on Indian cuisine usually starts with spices, but doesn’t end there. Spices are to Indian cuisine what the hashtag #wanderlust is to travel bloggers, a cliché but essential.

It is impossible to cook an Indian meal without a fistful of masalas, most of which we have been using for centuries now. The generous throwing-in of spices into a sizzling tempering is one distinctive commonality across the country’s cuisine, besides, of course, our habit of over-feeding guests with ‘ek aur lijiye‘.

The range of these spices too is vast. There are one-spice dishes, like basic subjis, which are based on a tempering of crackling mustard or cumin seeds, and there are refined kebabs and qaliyas that take up the flavour of up to sixty spices at a time.

Spices are present in most savoury dishes cooked in the country, and some — like cardamom, nutmeg, cinnamon — can be found in desserts too.

In Whose Samosa Is It Anyway?, I deep-dive further into the origin of our spices, which were crucial for building the flavour profile of our ancient dishes; and further, into how spice routes opened the Eastern world to the Western world, and vice versa.

Indian spices, then, were what clickbait articles like ‘Find your Disney Princess Name’ are to a teenager on the Internet. They led the West to us and exposed to them the beauty of sweet spices and their medicinal benefits, which for centuries were hidden in our kitchens.

In the bargain, these spice-seekers created trade routes and caused a massive cultural explosion, eventually even invading the subcontinent and colonising it.

Then come the indigenous ingredients and equipment; those that are native to this part of the world. I’ve spoken about ingredients that were found as molecular remains in various Indus sites, those like aubergine, ginger, gourd, and other produce that probably grew and were domesticated first in India.

From the origins of agriculture in India, the meats that early Indians ate, and the cropping patterns and farming equipment — it is surprising that so much has evolved through the centuries, yet really not so much.

Through Whose Samosa Is It Anyway? you’ll trace the history of several local Indian ingredients as well as those that were borrowed from different parts of the world. Some flavours, like paan, saffron, amchur, imli, jaggery, asafoetida, kashundi, kalonji, kokum, ghee, turmeric and kewra, were the most striking to me.

Though not all of them originated in India, they exemplify distinct Indian flavour notes.

Excerpted from Whose Samosa Is It Anyway?: The Story Of Where ‘Indian’ Food Really Came From by Sonal Ved with the kind permission of the publishers, Penguin Random House India.