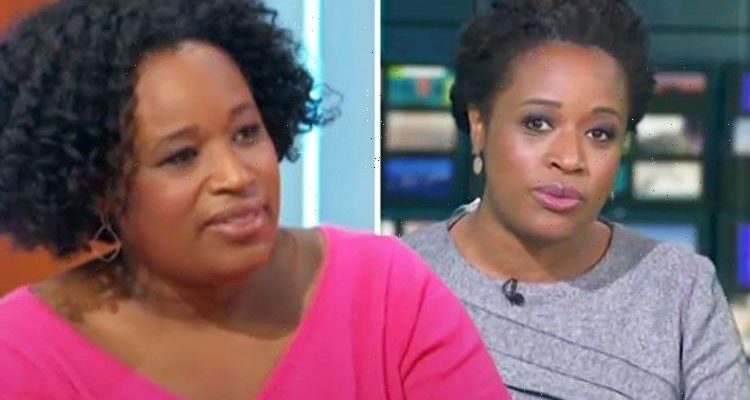 Charlene White admits she 'crumbled' after resonating with poem

Loose Women host Charlene White, who began her career as a journalist at the BBC, has claimed that the underrepresented groups of the UK are “most at risk” amid plans to scrap the TV licence fee. It comes after Culture Secretary Nadine said it is time to ask the question of whether “a mandatory licence fee is appropriate” during an announcement in the House of Commons on Sunday.

Ms Dorries also confirmed the BBC licence fee will be frozen for the next two years and will rise in line with inflation for the four years after that.

The ITV broadcaster suggested that the move could potentially “spark uproar” as the Beeb is set to lose funding by 2027.

The news journalist claimed that it will impact the programming on the BBC in a bid to connect with all groups of British society, adding that underrepresented groups would be most affected.

Taking to Twitter yesterday, the 41-year-old shared her thoughts on the move, as she defended the corporation for supporting her career.

In view of her 55,500 followers, Charlene penned: “Choosing what to keep and what to cancel leaves the BBC between a rock and a hard place really.

“Get rid of the stuff the (mostly white and older) middle classes want, there’ll be uproar.

“Leaving services for the underrepresented (whose voices are heard the least) most at risk.”

She continued: “BBC 1Xtra carved me into the journalist I became. I’ll be forever proud of that, and grateful to the bosses there who facilitated that growth.

“But I can guarantee that it will not be fought for with the same ferocity as say… Radio 3 or 4.”

She finished: “And why? Because Britain’s class system & the BBC will forever be in intertwined. With particular classes feeling they deserve what they like to consume, more than other people.

“With classical music being seen as having more “cultural importance” than say, grime for example. Sigh.”

Social media users reacted to her post, as Christian Christensen commented: “Precisely. It’s the interplay of popular and niche that makes public service so vital.”

Hut Handbags commented: “Let’s not forget BBC Bite Size is a great revision tool for many kids. Or the fact during lockdown they added to the online lessons. Many forget/ don’t even know  they support the education and revision for kids.”

Abi Lawrence remarked: “BBC has to innovate and move with time. BBC should try to please most of its stakeholders including the viewers or its rating will plummet.”

Dr Marrisa urged: “They need to keep @1Xtra and Cbeebies at the very least!”

Bosses at the corporation branded a two-year freeze of the fee as “disappointing” on Monday as Ms Dorries even came under criticism from her own side for the move.

She told the Commons that the BBC had asked for the fee to rise to over £180 by the end of the current settlement but said it will instead be fixed at £159 until April 2024 before rising with inflation for the following four years.

The Culture Secretary argued that the freeze was necessary to help households through “difficult times”.

She told MPs: “When it comes to monthly bills, this is one of the few direct levers that we have in our control as a Government.”

Ms Dorries said the decision was being taken in light of Britons facing increasing living costs and added it’s a “fair settlement for licence fee payers across the UK”.

BBC Director General Tim Davie has said yesterday’s licence fee settlement will leave the public broadcaster with a shortfall of £285M, as he branded the government’s move “disappointing”.