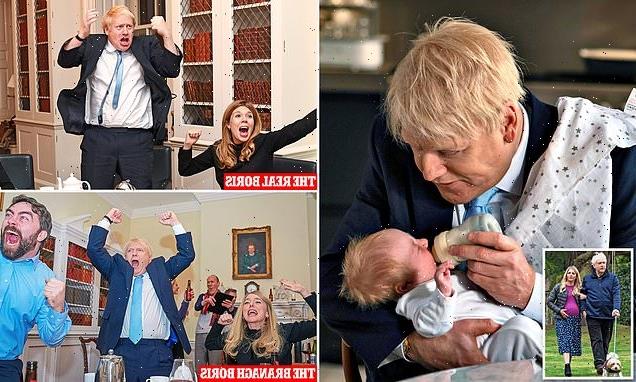 This England: We got a sneak preview of the Boris & Carrie drama… and (quelle surprise!) it’s yet another sneerfest by the TV-land Lefties, writes KATIE HIND

It’s the big-budget factual drama that promises to tell the tale of the pandemic as well as the Prime Minister’s leadership. With a stellar cast including Kenneth Branagh as Boris Johnson and glamorous up-and-coming actress Ophelia Lovibond as his wife Carrie, all the signs are there for it to be an informed behind-the-scenes account of the once-in-a-generation Covid outbreak.

Sky Atlantic, which will screen the six-part series later this month, says it will trace the impact of coronavirus on Britain and the response of scientists, nurses and doctors as they worked tirelessly and heroically to contain and overcome the virus.

But This England – written and directed by Left-leaning filmmaker Michael Winterbottom – misses no opportunity to slur Mr Johnson personally and professionally, misrepresenting him and dragging up details from his private life unconnected to his role in leading the charge against the pandemic.

Mr Winterbottom, a staunch supporter of the Labour Party and close friend of actor Steve Coogan, penned storylines that ensure viewers are repeatedly reminded of Mr Johnson’s previous romantic partners, while his relationships with his older children are painfully portrayed as being difficult.

Just minutes into the first episode, Charles Dance, playing Sir Max Hastings who was Mr Johnson’s editor at The Daily Telegraph, says of him: ‘Dignity still matters in public life, Boris Johnson will never have it.

‘For many of us, his elevation will signal Britain’s abandonment of any claim to be a serious country. I have a hunch that Johnson will come to regret selling the prize for which he has struggled so long.’ 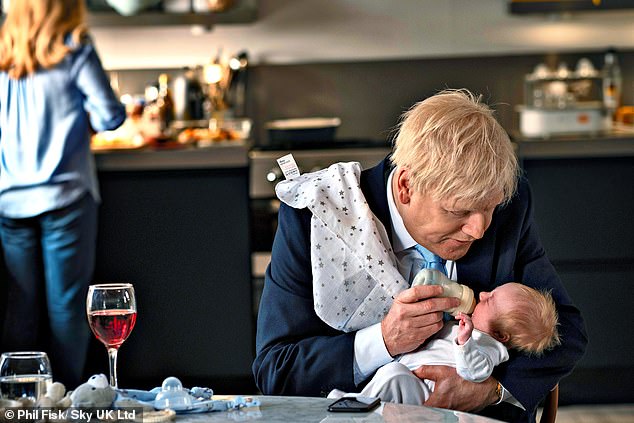 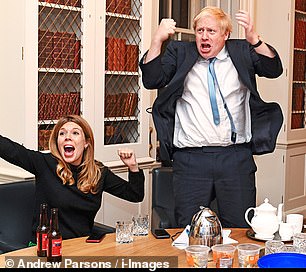 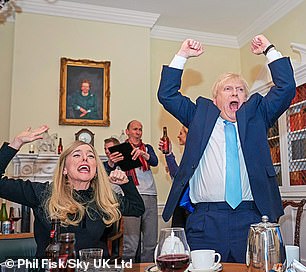 Next is a crass scene where viewers hear Mr and Mrs Johnson having sex. Seconds later, it says on the screen that their son Wilfred was born nine months after they moved into Downing Street.

Meanwhile, Mr Johnson’s former lovers appear in dreams, used throughout the series to peddle stories with no relevance to the pandemic. While Mr Johnson is asleep, a voice reminds him of his romance with the writer Petronella Wyatt, while film footage of blonde American entrepreneur Jennifer Arcuri is employed to haunt the then Prime Minister.

One source involved with This England told The Mail on Sunday: ‘What some people on the crew can’t understand is how the series can be described as being all about the pandemic and the heroics of the NHS when, in fact, it has been used as a tool to smack Boris.

‘It is glaringly obvious. It seems a pretty low blow. You’d think that their main agenda is to eviscerate Boris and Carrie, not highlight the truths about our NHS heroes.’

And, writing on the opposite page, Nadine Dorries, Culture Secretary in Mr Johnson’s Cabinet, calls the programme ‘dangerously tendentious’, ‘fabricated’ and seeming ‘intent on diminishing Boris Johnson and his wife Carrie in the eyes of the world’.

This England also includes graphic scenes, including one where Mrs Johnson’s waters break shortly before she gives birth to Wilfred. She is also seen vomiting into a toilet when she appears to be suffering from morning sickness.

And even when the series tells of Mr Johnson’s own battles with Covid, the scenes come across as intrusive. He is seen sweating while in intensive care and is portrayed as being fed water through a straw. 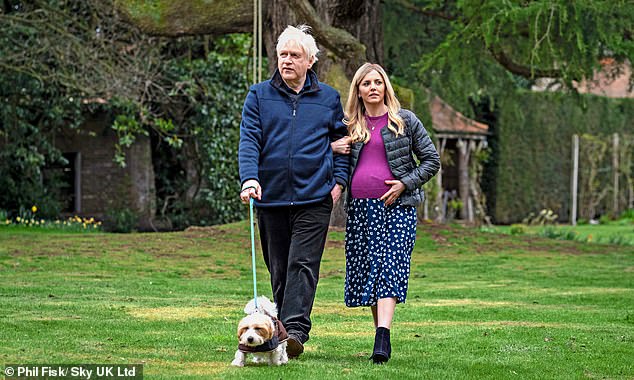 Generally, the impression is given that the PM cares more for his dog, Dilyn, than for his wife, whose concerns about her pregnancy he often blithely overlooks

During his stay in St Thomas’ Hospital in London, viewers will see the then PM have deathbed dreams involving his ex-wife Marina Wheeler and daughters, who berate him. At one point, Ms Wheeler says: ‘Here lies the man who has done me wrong,’ before she screams loudly.

The Johnsons are further misrepresented when their 2019 holiday to Mustique is featured.

Branagh and Lovibond are seen travelling to the West Indies on a private jet sipping champagne. In fact, Boris and Carrie flew economy with a British Airways.

In what is meant to be a humorous, recurring theme, Mr Johnson is depicted giving poo bags to his staff when asking them to take his dog Dilyn for walks. Generally, too, the impression is given that the PM cares more for the animal than for his wife, whose concerns about her pregnancy he often blithely overlooks.

Indeed, Mr Winterbottom mischievously shows Mrs Johnson confiding in a male staff member in Downing Street, whom she asks to accompany her to hospital, invites to her baby shower and confides that she is expecting a boy. There is no evidence that the real Carrie Johnson had such a male confidant.

Branagh’s mimicry of Mr Johnson is charismatic – employing his experience as a Shakespearean actor to ape Mr Johnson’s love of quoting the Bard at times of crisis.

Mr Winterbottom originally planned a scene involving Mr Johnson’s teenage daughter from his relationship with art consultant Helen McIntyre. But that was axed after The Mail on Sunday revealed the plot to have her meeting her new baby brother Wilfred.

The programme also features stage actor Simon Paisley Day as Dominic Cummings and Andrew Buchan – star of ITV drama Broadchurch – as then Health Secretary Matt Hancock, as it documents how the two were at war during the pandemic.

The show includes Cummings’s infamous trip to Barnard Castle as well as depicting him and Lee Cain, the PM’s former director of communications, behaving aggressively towards staff in No 10.

Mr Winterbottom left the production during filming and was replaced by The Crown executive Julian Jarrold.

Disclaimers have been added before each episode saying that they are ‘fiction based on real events’, after inaccuracies were pointed out by The MoS.

Mr Winterbottom’s last big project was directing the movie Greed, based on the downfall of retail boss Sir Philip Green, with the lead played by his close friend Coogan.

NADINE DORRIES: This England is invasive, fake, cruel… and how can they be privy to the Prime Minister’s dreams?

For the families and friends of the more than 200,000 people in this country who died from Covid, This England will be very painful viewing. That hurt will be compounded by the fact that so many scenes of the TV drama have been fabricated to fit a narrative that seems intent on diminishing Boris Johnson and his wife Carrie in the eyes of the world.

Yes, the drama is compelling viewing. But as someone who served in Boris’s Cabinet and was a Health Minister throughout the Covid pandemic, I have to say that the six-part series is dangerously tendentious.

Admittedly, the producers put a disclaimer before each episode, stating that the drama is fictional, based on true events. But the fact that scenes are interspersed with real news footage makes it very deceptive. Also, many scenes involving politicians and civil servants are eerily convincing.

Indeed, I can vouch for that. Some of the events depicted, for example in the Department for Health and Social Care, are unnervingly accurate in their details of Zoom calls and the positions in which staff sit at meetings.

But as for the treatment of Boris himself, the series is personally invasive and cruel. And every fiction writer knows it’s easier to present what you might want to have happened rather than present an accurate version of the truth. 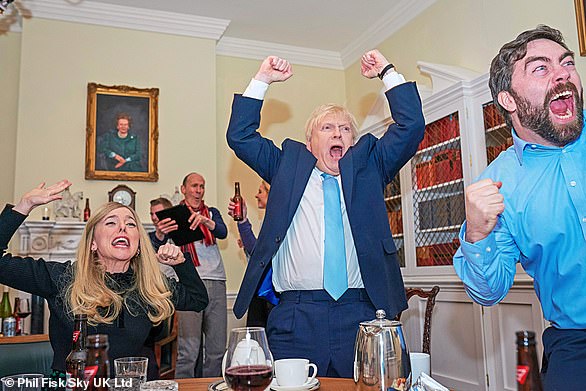 Of course, Sir Kenneth Branagh, as Boris, is superb. Who could watch the actor in anything and not be totally captivated?

Some of the most disingenuous scenes involve what can only be described as the fevered imaginings of the screenwriters, showing the Prime Minister tossing and turning in bed as he is tormented by dreams.

This is obviously invented. How on Earth could they be privy to Boris’s dreams?

It is true that one of the common symptoms of Covid is vivid nightmares. I remember it clearly myself.

However, Sky Atlantic has used this as a way of callously inventing dreams that its producers want Boris to have had in order to cynically focus viewers’ inappropriate attention on to personal issues such as his relationship with his children from his second marriage, naming each one individually.

As for Carrie, she is a woman who prefers to be out of the limelight. She is immensely private and shuns publicity. During her time in No 10, she was probably photographed, filmed and interviewed far less often than any other recent Prime Minister’s partner or wife.

Having been with her when the going has got very tough, I can confirm that her calmness comes into its own and she is a tower of strength, both to Boris and those around her.

Ignorant of the truth, the makers of This England had to invent a storyline around her and have obviously not challenged duff information they were given from whichever attention-seeker they happily employed to embellish their story. 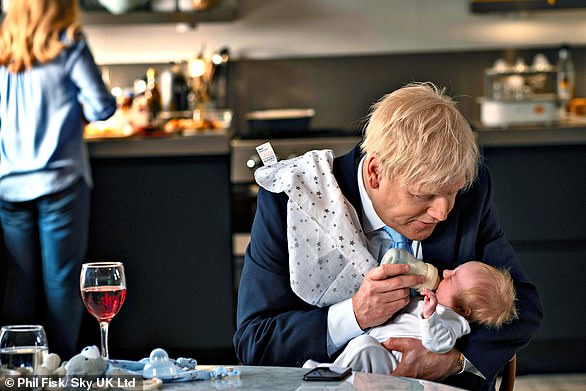 The show cynically focus viewers’ attention on to personal issues such as his relationship with his children from his second marriage, naming each one individually

The fact is that the vast majority of the scenes involving Carrie never happened. The character portrayed is simply not the person anyone close to Carrie recognises or knows.

She would never ask anyone to run errands in an entitled manner as the series repeatedly suggests. There is an absurd plot line involving a secret friendship with a male friend that is pure – and poisonous – fiction. There are conversations, scenarios and apparent events that are just crassly made up.

All these fabrications are cleverly interwoven with factual content regarding key government meetings about the pandemic in which real life is replicated almost to the word.

Of course, Sir Kenneth Branagh, as Boris, is superb. Who could watch the actor in anything and not be totally captivated? I’ve been a Branagh fan since I saw him play Hamlet at the Royal Shakespeare Company in Stratford-upon-Avon in 1992.

Was his portrayal of Boris accurate? Sadly not. Branagh must have used material and been given information about our former PM that was inaccurate. A Left-wing filter was placed over the camera lens throughout filming – as is so often the case these days with TV drama.

It is a tragedy that such a jaundiced image has been presented in This England – particularly at a time when the eyes of the world are on this country. But I suppose I expected nothing less from a self-regarding, metropolitan, theatrical class whose favourite sport is trying to take pot-shots at the Johnsons.