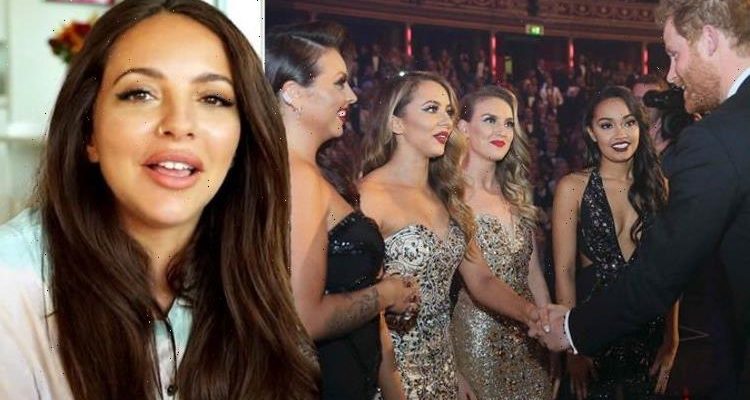 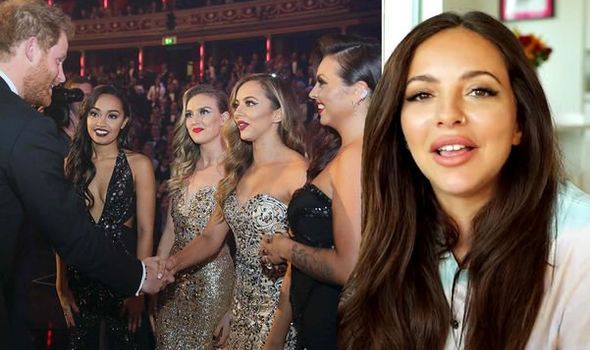 As part of Little Mix’s At Home YouTube documentary, Jade Thirlwall, Leigh-Anne Pinnock and Perrie Edwards shared memories behind some of the pictures taken of the group over the years. One of the photos included the moment the quartet met Prince Harry, 37, at the Royal Variety Performance in 2015.

The 28-year-old said her bandmates encouraged her to chat him up at the time as they were both single.

Laughing, she spilled: “I remember at the time I think I was the only single one and the girls were like ‘go on Jade’ – trying to push us onto Prince Harry.

Addressing her hand shake with the father-of-two, she added: “Maybe I was trying to give him some eye contact, do you know what I mean?”

Jade pointed out it was one of the first times the group felt like “Cinderellas” in “really dolled up in sophisticated gowns”.

Dressed for the occasion, she joked she was finally ready to meet her Prince, but “never got him.”

She concluded the story adding the 37-year-old “wasn’t that a**ed”.

In the picture, all four members seemed to be in good spirits as they spoke to the royal.

She has since found love with former Rizzle Kicks star Jordan Stephens, 29.

Jade confirmed her romance with the singer in 2020.

They tied the knot in 2018 and welcomed their first baby together, son Archie, in 2019.

Earlier this year, they introduced their second child to the world, a daughter named Diana Lilibet.

In January 2020, the couple announced they had stepped back from their senior royal duties.

They later moved to Los Angeles and currently live in Montecito, California.

Back in March, the pair did their first exclusive interview with Oprah Winfrey, since leaving the Royal Family.

During the interview, he told Oprah he felt “trapped” in “the firm” and had to get out.

When asked if he would’ve stepped back if he hadn’t met Meghan, he said it was unlikely.

It is believed they won’t be travelling back to the UK to spend Christmas with his family.