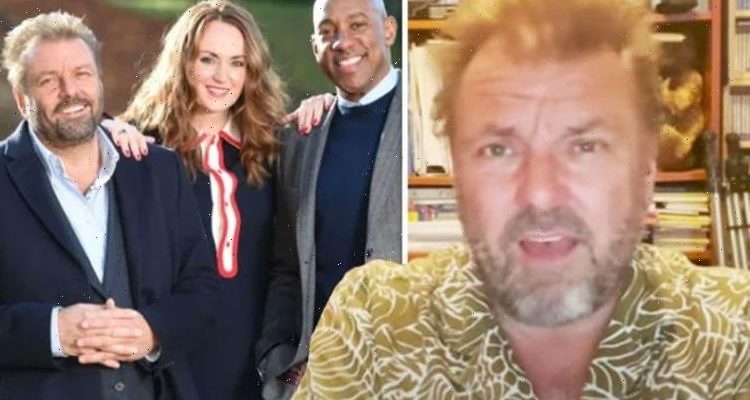 Martin Roberts, 57, has revealed he and his Homes Under The Hammer co-stars “don’t get together ever” in a candid insight into his experience working on the BBC show. It comes after two new presenters, Jacqui Joseph and Tommy Walsh, joined the cast – made up of Martin, Dion Dublin, 52, and Martel Maxwell, 44, this year.

Martin admitted that although he thinks “it’s nice to have some new people on board”, he hasn’t had a chance to meet up with the rest of the team recently.

When quizzed on whether he was glad to welcome Jacqui and Tommy to the programme, the property expert said in an exclusive interview with Express.co.uk: “Yeah, I mean we don’t get together ever.

“They’re doing their bits, wherever they’re doing, and off I’m doing my bits.”

Martin went on to say that producers decided to add to the team after facing difficulties in filming over the past year due to lockdown restrictions.

He explained: “But yeah, two good people, and obviously making the show has been a huge challenge in lockdown and the number of properties we can film in the day has been cut in half, and then the ability for people to get around travelling about.

Martin added of the change in the presenting line-up: “So, you know, it was nice to have some new people on board and it freshens up the show a little bit maybe.

“And the show continues to have a place in so many people’s hearts and people have found it in lockdown who didn’t know about it before and loved it, it’s like 1.2 to 1.4 million viewers every day.

“So it blows everything at any time of the day out of the water.”

Gushing about the show’s success, Martin proudly continued: “We just potter along, we don’t really get in the papers very much.

“We just trundle along and hopefully just provide an entertaining hour to people’s day, every day.

“So it continues to attract people who seem to love it and that makes me very, very proud, because I’ve been on it since the start.”

Martin went on to share that he is grateful for the camaraderie between himself and the rest of the Homes Under The Hammer team, despite them not being able to catch up in person very frequently.

The star revealed that many of his colleagues have supported him following the sad loss of his pet dog Rolo.

It comes after Martin shared his heartbreak on social media over Rolo’s death last month due to advanced inflamed bowel disease.

The star received a condolences card from the production crew and a message from his former Homes Under The Hammer co-star Lucy Alexander.

He shared: “The production crew sent me a condolences card.

“I think Lucy sent me a message of condolence, I think the others did as well.

“But if you’ve got a dog, you know why. You can’t compare it to the loss of a human being, in general terms, but in terms of your heartbreak, for a lot of people, it’s all on par because these things are just so loving.

“That’s all they do. They want love, they give love, they are not judgmental, they are everything that you’d want in a friend.”