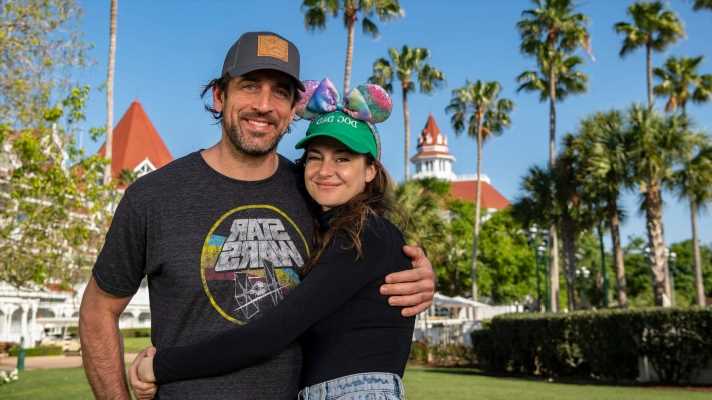 Shailene Woodley says she and Aaron Rodgers jumped “headfirst” into a relationship.

Woodley, who confirmed her engagement to the NFL star in February, said the couple “immediately” moved in together when they first started dating during the COVID-19 pandemic.

“Starting a relationship where you immediately move in with someone – because it’s a pandemic and you can’t just get on a plane and go back and forth on weekends – taught us a lot about each other very quickly,” she said in an interview with Shape Monday.

Woodley, 29, said the unconventional dating approach helped the couple get “some of the sticky bits out of the way early.” The actress believes they are “meant to be together.”

“I have the perspective that I would have met Aaron in any context, any space in time,” she added.

Woodley said she first quarantined alone with her dogs and “didn’t see anyone for three months.” But that changed months later when she moved in with Rodgers in Montreal, where she was filming an upcoming project. While Woodley was working, Rodgers was busy preparing for a role of his own: “Jeopardy!” guest host (which aired in April).

“I don’t know him as a football guy. I know him as, like, the nerd who wants to host ‘Jeopardy!’ That’s the dude I know,” Woodley previously said of the Green Bay Packers quarterback in February. “I never thought I’d be engaged with somebody who threw balls for a living.”

The best and worst ‘Jeopardy!’ guest hosts, from Aaron Rodgers to Mayim Bialik

Rodgers announced he was engaged in February while accepting the 2020 NFL MVP award. Although he gave a special nod to his fiancée, he didn’t identify her.

Woodley, 37, confirmed her engagement to Rodgers several weeks later during an appearance on “The Tonight Show Starring Jimmy Fallon.”

“Yes, we are engaged,” Woodley told Fallon on Feb. 22. “But for us, it’s not new news, you know? So it’s kind of funny. Everybody right now is freaking out over it and we’re like, ‘Yeah, we’ve been engaged for a while.'”