While many of those who considered themselves the staunchest loyalists (and biggest defenders) of former President Donald Trump, it seems that an obvious, ever-widening schism has cracked open in the months following Trump’s leave from the White House. Among the most prominent of these figures distancing themselves includes Rudy Giuliani, whose ongoing feud with Trump has been the subject of discussion and speculation since January, as well as Trump’s one-time Vice President Mike Pence, who has seemingly fallen out of his old boss’s good graces and those of his supporters.

Now, according to a report by the Associated Press (via Yahoo! News), it looks like yet another member of Trump’s political inner circle — one rife with seemingly tenuous alliances at this point — has begun the process of parting ways with the erstwhile commander-in-chief. Shockingly, it’s none other than Florida Governor Ron DeSantis, who has previously been considered Trump’s go-to champ. So what’s the reason for the sudden rift between DeSantis and Trump? And does it look like the issue will be permanent? Keep on scrolling to find out more.

Ron DeSantis is working with Democrats on the Miami tragedy 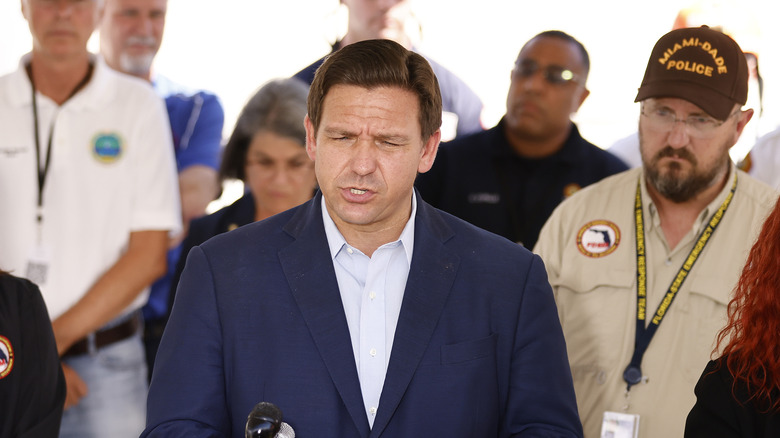 According to a July 9 report by the Associated Press (via Yahoo), Florida Gov. Ron DeSantis has, by all appearances, left behind the divisive Republican rhetoric of ex-President Donald Trump in favor of bipartisanship following the Surfside condo collapse near Miami on June 24, (At the time of this writing, the press has reported a death toll of 64, and local authorities are still undergoing rescue efforts in order to find the remaining missing, presumed dead.)

Per AP, DeSantis has worked closely with Florida Democrats and President Joe Biden in aiding Florida officials, and appeared alongside Biden at the site. Miami-Dade County Mayor Danielle Levine Cava, a Democrat, remarked to AP that DeSantis has “been decisive,” “constant,” and “collaborative” with politicians across the aisle and with the people of their state. “Hats off to the governor for how he has supported us in this crisis,” she added. DeSantis also “skipped a rally in Sarasota headlined by … Donald Trump” amidst the response.

As the publication pointed out, DeSantis’ response to the Surfside tragedy has been markedly different from that of Trump compared to crises like the California wildfires in 2020, during which Trump refused to send aid to states headed by Democrats over dissenting political opinion. While Trump hasn’t disparaged DeSantis’ choice to work with Democrats, it could also leave Trump with a threat in 2024 – with DeSantis as the possible GOP forerunner, per AP.