Record heavy rains lashed the city as well as the rest of the state under the influence of a deep depression in Bay of Bengal that weakened into a depression as it entered Telangana after covering Andhra Pradesh. 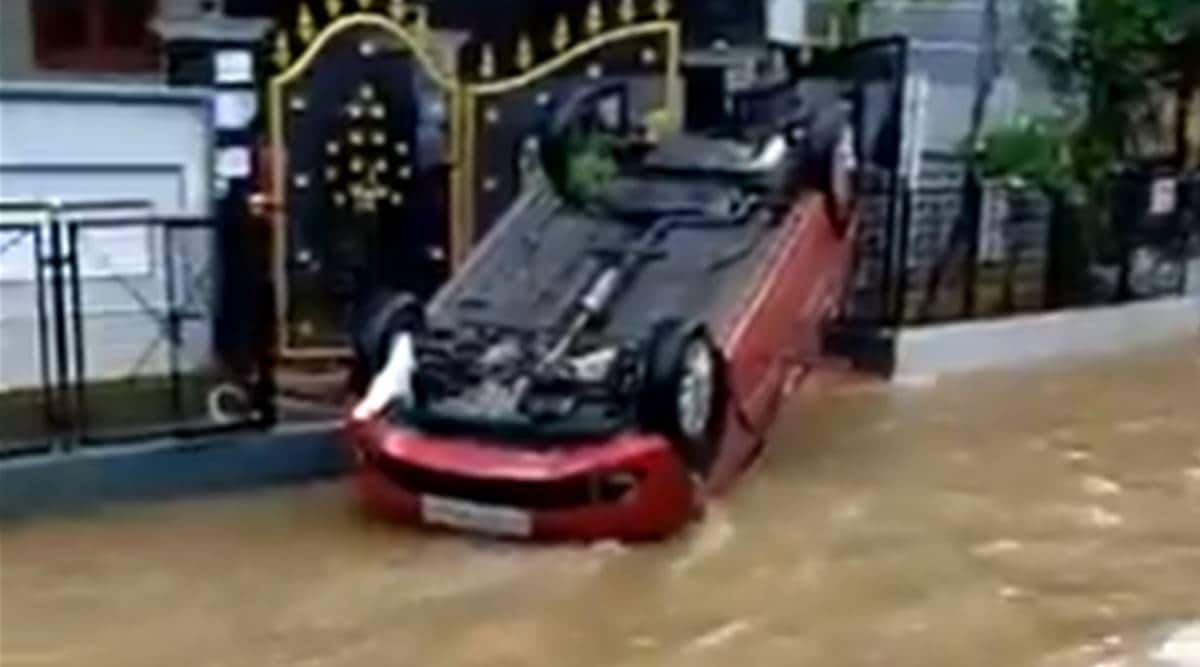 Eight persons, including a 19-day-old child, died and two others sustained injuries late Tuesday night when a boulder crashed over two houses in Hyderabad’s Bandlaguda area, said police. Record heavy rains lashed the city as well as the rest of the state under the influence of a deep depression in Bay of Bengal that weakened into a depression as it entered Telangana after covering Andhra Pradesh. As it moved across the state further towards Maharashtra and Karnataka, very heavy to heavy rainfall was recorded in all the districts in its pathway.

Most parts of Hyderabad and adjoining areas remained inundated throughout the evening even as disaster response and relief teams led by NDRF, SDRF and the Greater Hyderabad Municipal Corporation’s Disaster Response Force teams along with police and fire services personnel were on the ground. Overflowing tanks and lakes resulted in water entering homes in low-lying areas. Vehicles were washed away and power supply has been snapped in several localities. After the Himayat Sagar lake on the outskirts of Hyderabad was filled to the brim, the flood gates were opened at midnight. On Wednesday morning, Shamshabad DCP N Prakash Reddy asked people going to or returning from the Hyderabad international airport to use the Outer Ring Road and avoid the old Kurnool road connecting to the city, owing to heavy waterlogging on the roads.

GHMC received 663 grievance calls till 11 pm Tuesday. Waterlogging complaints were received from 240 locations, followed by 227 drainage overflow complaints. Similar complaints were raised over 112 trees that were uprooted and 23 tree branches that had fallen.

People living in low-lying areas were evacuated. In ToliChowki’s Nadeem colony, which is known to be flooded with waters from nearby Shah Hatim talab for several years now, NDRF teams rescued over 600 people from 170 homes using boats. 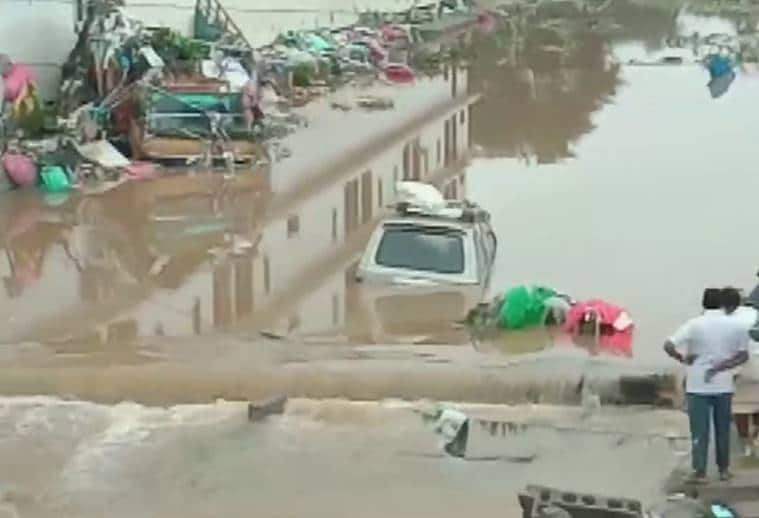 According to the data shared by Telangana State Development Planning Society(TSDPS), which has 1044 automated weather stations(AWS) across the state, the highest rainfall of 32.5 cm was recorded in Ghatkesar of Medchal Malkajgiri district till 6 am Wednesday. This was followed by 40 other AWS locations that recorded between 20 cm and 30 cm rainfall. Another 268 locations across the state recorded over 10 cm rainfall. 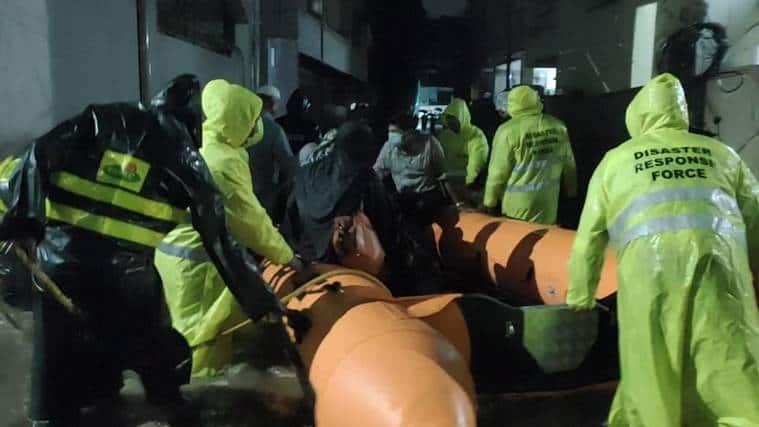 Earlier in the afternoon, she said that “the Deep Depression over north coastal Andhra Pradesh weakened into a Depression over Telangana about 140 km east-southeast of Khammam (Telangana) and 90 km west-northwest of Kakinada (Andhra Pradesh). It is very likely to move west-northwestwards and weaken into a Well-marked low-Pressure area during the next 12 hours”. The deep depression had earlier crossed Andhra Pradesh coast close to Kakinada between 6.30 am and 7.30 am Tuesday with a sustained maximum wind speed of 55-67 kmph gusting up to 76 kmph.

For an average 24-hour rainfall for districts in Telangana, Medchal Malkajgiri recorded a very heavy rainfall of 17cm, followed by Hyderabad at 14 cm, and Yadadri Bhuvanagiri at 12 cm. Six other districts recorded heavy rainfall.

Later in the evening, Chief Secretary Somesh Kumar and DGP M Mahendar Reddy held a teleconference with senior officers, and asked the district administrations to be on high alert and strictly follow the flood-protocol communicated earlier.

“Heavy rains have lashed the state. In Hyderabad, many areas have had 20cm rains in the last 24 hours. Several untoward incidents have been reported. Massive flooding and waterlogging are likely to occur in low lying areas. The falling of trees and electric poles can happen to lead to disruption of normal activities. Reservoirs, tanks, and streams may overflow causing inundation of low-lying areas and cause low bridges and causeways to overflow, posing threat to traffic and people,” the message read. People have been asked to stay indoors. “Special attention needs to be paid to low-level bridges and causeways and all traffic and pedestrian movement has to be strictly prohibited and ensure no loss of lives,” it said.

For all the latest Hyderabad News, download Indian Express App.