The Hyderabad MP also blamed the Samajwadi Party chief and former CM Akhilesh Yadav for the withdrawal of 77 cases related to the 2013 Muzaffarnagar riots by the current BJP government. 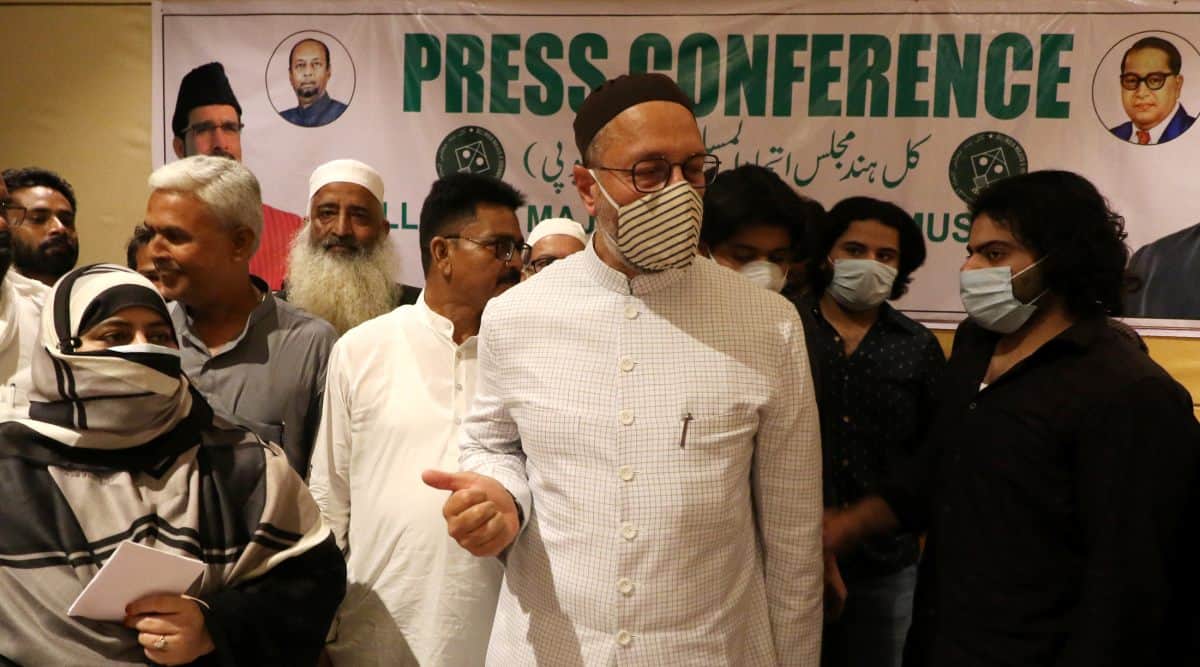 Targeting the Samajwadi Party, Congress and BSP, Owaisi said: “This is not the AIMIM of 2017. Now, we have a strong organisation. Our message has reached almost every household. We are stronger because of the hard work of our people. I have only one message for you… Uttar Pradesh is the biggest state in India. Every community here has a political leadership and identity. If there is a community without a political leadership and voice, then that is the Muslim community… If there is one community which is helpless, then it is the Muslims of UP. If Indian democracy has to become strong, then all the communities must have a share in it. The Muslims of UP never got their share of power because on the false promise of secularism you voted for parties like
Congress, Samajwadi Party and BSP… You should ask yourself who is your leader?”.

Invoking the demolition of Babri Masjid in Ayodhya in 1992, Owaisi said: “The secular parties are scared of mentioning it today. They keep scaring you and benefitting… The community will not be scared. Muslims are taught to fear only God… I have come here to defeat the BJP and ensure they don’t form the government here.”

Singling out the Samajwadi Party, which has banked on the Muslim-Yadav votes, Owaisi said: “Since there are 11 per cent Yadavs in the state and 19 per cent Muslims, why should the chief minister always be a Yadav?”

The Hyderabad MP also blamed the Samajwadi Party chief and former CM Akhilesh Yadav for the withdrawal of 77 cases related to the 2013 Muzaffarnagar riots by the current BJP government.

“When Muzaffarnagar riots happened, Akhilesh Yadav was the chief minister. If he had started the cases, then the Yogi Adityanath government could not have withdrawn the 77 cases. They don’t want an independent leadership of Muslims in UP… When we talk about sharing of power, it pains them,” he added.

Speaking about the infrastructure projects “pending” in the district, he took a dig at CM Adityanath, saying: “There was supposed to be an overbridge here in Rudauli. But it was never built. If you ask CM Baba, then he may not know. He will say change the name of it.”

“At least 50 children died in Firozabad. Will they come back by changing the name of something?” he added.

He said that out of Rs 116 crore sanctioned to the UP government by the Centre for the development of villages with a sizeable minority population, only Rs 16 crore was used. “Then, Modi says ‘sabka saath, sabka vikas, sabka vishwas,” he said as he slammed the UP government over “lack of infrastructure in the state and in Rudauli town”.

When asked why he was not using the name of Ayodhya and instead referred to the place as Faizabad, Owaisi replied, “Ayodhya is written on the banner too. Ayodhya comes under the Faizabad parliamentary constituency. Why will I not consider it?”

Owaisi, who is on a three-day visit to the state, will be going to Sultanpur on Wednesday and Barabanki on Thursday.

Jailed former MP Atiq Ahmad’s wife Shaista Parveen on Tuesday joined AIMIM in the presence of party chief Asaduddin Owaisi in Lucknow. Ahmad, who is currently in jail under the UP Gangster Act, through a letter to the media announced that he was also joining the AIMIM.

Ahmad was a Samajwadi Party MP from Phulpur Lok Sabha constituency between 2004 and 2009 and has been a five-time MLA. In 2019, he was shifted to a high-security jail in Ahmedabad on the order of the Supreme Court.

“I welcome Atiq Ahmad sahab, his wife and other family members who are here. I believe that with Atiq sahab joining us, our party will become stronger for upcoming Assembly polls and in future too,” Owaisi told reporters.

Defending the induction of Atiq Ahmad, Owaisi said: “In UP, there are 37 per cent BJP MLAs who have criminal charges against them.
There are 116 BJP MPs who have criminal charges. Out of the 116 BJP MPs, 87 per cent have serious charges against them. As per a report of ADR (Association for Democratic Reforms), BJP has the highest number of MP and MLAs with criminal cases… As per the law, Atiq Ahmad has not been convicted in a single case.”

The BJP sharply reacted to Owaisi’s remark. “Giving protection to notorious criminals like Atiq Ahmad in the name of providing protection to the community, inducting him and his wife in AIMIM shows Owaisi’s mentality,” BJP Kannauj MP Subrat Pathak tweeted in Hindi.