The communal violence in Bangladesh has also revived the debate over the need to implement the Citizenship Amendment Act (CAA) in West Bengal, with the saffron party underlining its need to help the persecuted Hindu minority in the neighbouring country. Recent incidents of communal violence against minority Hindus in neighbouring Bangladesh has set off a churning in the political discourse of West Bengal, with the ruling Trinamool Congress and the opposition BJP trying to cash in on the issue in the run-up to the October 30 by-elections in the state.

However, political analysts are divided over whether the incidents in Bangladesh will bore any political dividends for the saffron camp in West Bengal and shape the political discourse in the state.

The communal violence in Bangladesh has also revived the debate over the need to implement the Citizenship Amendment Act (CAA) in West Bengal, with the saffron party underlining its need to help the persecuted Hindu minority in the neighbouring country.

Violence erupted in parts of Bangladesh last week over an alleged blasphemy incident at a Durga Puja pavilion at Comilla, around 100 km from Dhaka, following which paramilitary forces were deployed in many affected areas.

However, sporadic clashes broke out between the police and bigots as media reported the vandalisation of Hindu temples and Durga Puja marquees. At least five people were killed, and scores were injured in the violence.

The recent spate of communal violence in Bangladesh has found resonance in West Bengal with BJP leaders using it in their campaign in the by-elections to four assembly constituencies.

“Obliviously, the kind of violence that took place in Bangladesh and the way Hindus were attacked will have an impact on this side of the border. This was the reason that our government at the Centre had passed the CAA. 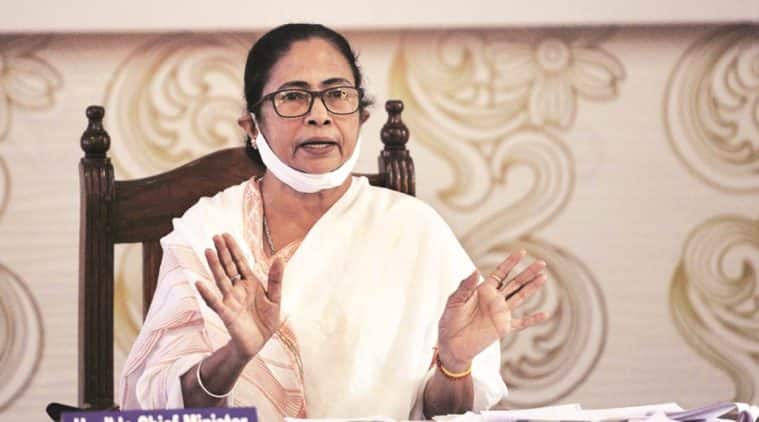 “But parties like the TMC had opposed it for their vote bank politics. Now, these parties have gone silent. Chief Minister Mamata Banerjee can take the Joy Bangla slogan from Bangladesh but can’t utter a word against such incidents,” BJP national vice-president Dilip Ghosh said.

Echoing him, Leader of the Opposition in West Bengal assembly, Suvendu Adhikari, said that the incidents in the neighbouring country would have a “definite impact” on the eastern state. 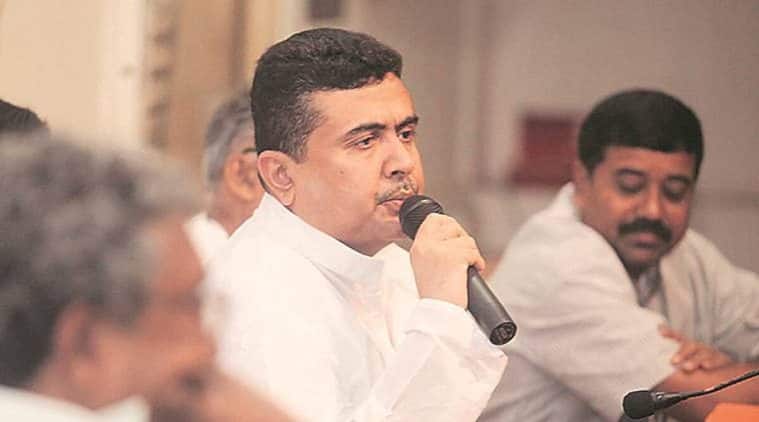 “Wherever Hindus will be attacked, we would raise our voice against it and fight for justice. The attack on the minority community in Bangladesh will have an impact on West Bengal. The people here will very well understand why we fought for CAA and why the TMC opposed it,” he said.

Out of the four assembly seats — Dinhata, Santipur, Gosaba and Khardah – the BJP has kick-started a high-pitch campaign in Bangladesh-bordering Dinhata and Santipur in Coochbehar and Nadia districts respectively, highlighting the atrocities on Hindus in the neighbouring country.

These constituencies have a sizeable number of voters who trace their roots to Bangladesh and had to leave the country during partition in 1947 or the Liberation War in 1971.

Santipur has a sizeable Matua population, who make for a large chunk of the state’s Scheduled Caste population. They had been migrating to West Bengal since the 1950s, primarily due to religious persecution in erstwhile East Pakistan, and subsequently, in Bangladesh.

Riding on the CAA poll plank, both these bordering seats were won by the BJP in the April-May assembly elections but were vacated after legislators resigned to retain their MP seats. 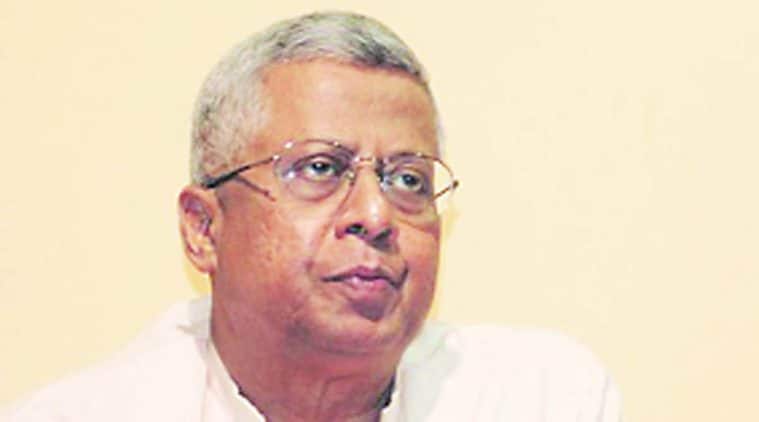 Pointing to the unprecedented number of protest rallies across the state, BJP leader Tathagata Roy said this is quite a “shift from the past” when hardly protest rallies used to be held over attacks on minorities in the neighbouring country.

“Attacks on Hindus in Bangladesh is not a new thing. Maybe this time, it has crossed all the limits. But what is new is the unprecedented number of protest rallies organised in West Bengal in the last one week. It may or may not have an impact on the state’s political or electoral discourse, but it is for sure have started churning in West Bengal,” he said. 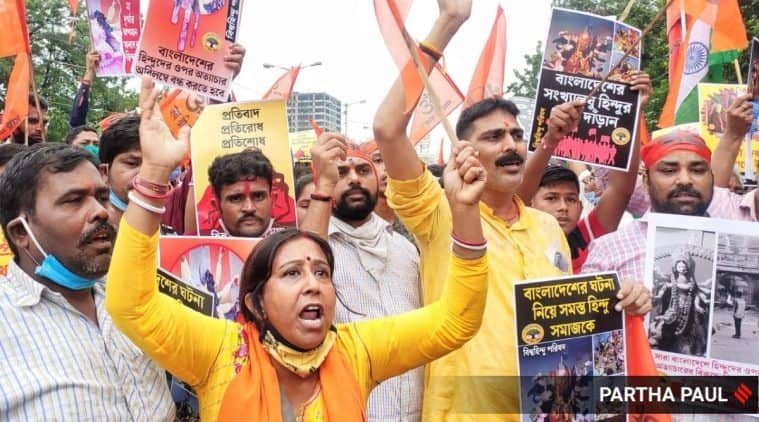 Although the TMC has demanded that the violence against the Hindus in Bangladesh should immediately stop, it declined to attach much importance to BJP’s attempt to polarise the masses by using the incidents as a launching pad.

“We want that minorities in Bangladesh should be protected by its government. But the BJP should stop pursuing vulture politics over dead bodies. The saffron party’s attempt to polarise people in West Bengal won’t yield any result as their top brass itself has been maintaining a deafening silence on the matter,” TMC leader Sougata Roy said. 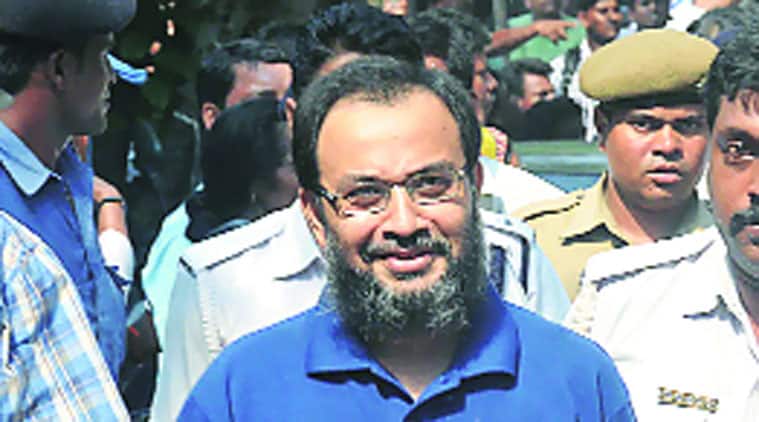 “It is quite shocking that we have not heard a single word from our prime minister. But during the West Bengal assembly elections, he had visited a temple in Bangladesh.

“Some BJP leaders are saying that the incident in the neighbouring country will benefit their party. This means that the saffron party is the beneficiary of such atrocious attacks on Hindus in Bangladesh. There should be a proper investigation into the role of the beneficiaries also,” Ghosh said.

Last week, the Ministry of External Affairs (MEA) had noted that the government in the neighbouring country had reacted promptly to ensure that the situation was under control and said that the Indian mission is in close contact with the Bangladeshi authorities over the matter.

Political analysts, however, were divided over the impact of communal violence in Bangladesh on West Bengal’s politics.

Political scientist Sabyasachi Basu Ray Chaudhury felt that communal violence in Bangladesh, India, or Pakistan has a cascading effect on the region.

“India, Pakistan, Bangladesh were one country during the British rule. There are a lot of similarities. So, whenever an incident such as communal violence of this nature takes place in one country, it has a cascading effect on the other two. It is quite obvious that this will have an impact on West Bengal and its politics. The nature of our state’s politics has also changed over the years,” he said.

“Only a few months back, this communal narrative, demand for CAA has been defeated in the West Bengal elections. People voted for the narrative of Bengali sub-nationalism. The BJP will try to reap some dividends, but it won’t be able to make any major changes,” he said.

The Trinamool Congress, led by feisty Mamata Banerjee, stormed to power for the third consecutive time riding on the poll plank of sub-nationalism and bagged 213 seats. In contrast, the BJP, despite its high-pitch poll campaign, managed to bag only 77 seats.

Echoing Bhattacharya, political analyst Biswanath Chakraborty felt that the BJP’s “communal narrative” won’t resonate with the voters in the by-polls as people are more concerned about “fuel prices” and other “anti-people policies”.