After meeting BJP national general secretary Kailash Vijayvargiya and Shukla’s family in the evening, the Governor called for “an independent expert probe” into the killing. The family and the saffron party have sought a CBI investigation. 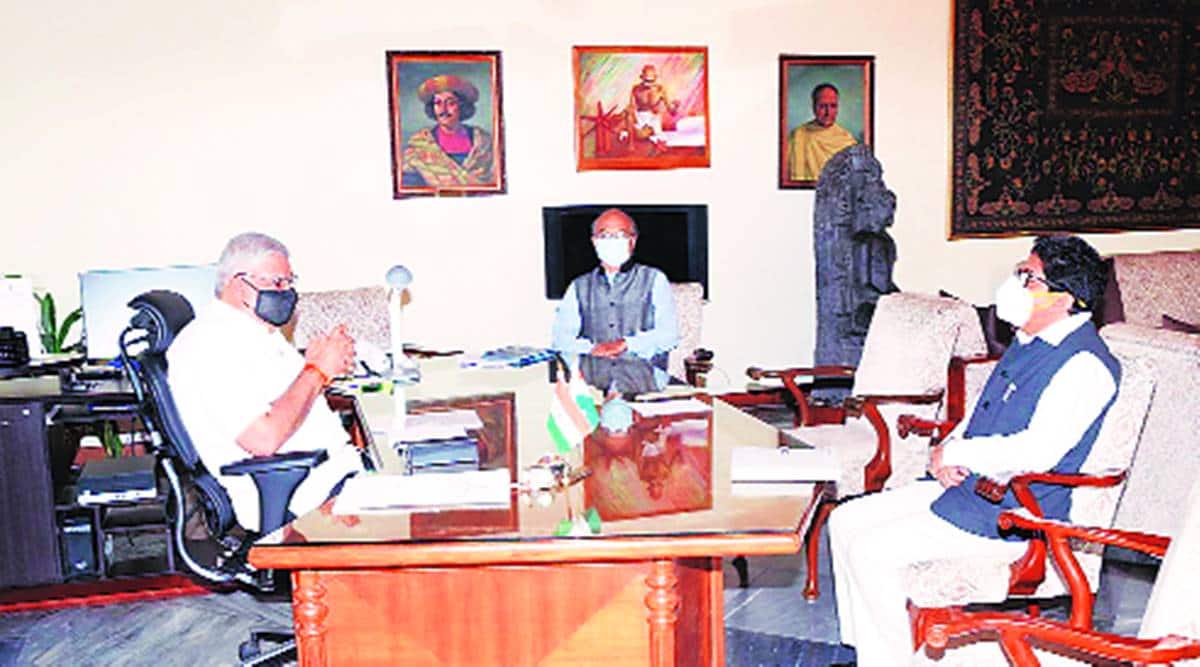 A day after BJP leader Manish Shukla was shot in Titagarh in North 24 Parganas district, Governor Jagdeep Dhankhar on Monday hit out at the state police and expressed doubts about a “fair investigation” by the force. He alleged that the police had sacrificed principles of criminal jurisprudence.

After meeting BJP national general secretary Kailash Vijayvargiya and Shukla’s family in the evening, the Governor called for “an independent expert probe” into the killing. The family and the saffron party have sought a CBI investigation.

Earlier in the day, Dhankhar met Chief Secretary Alapan Bandyopadhyay in Raj Bhavan and expressed his concern about the “present alarming scenario”.

On Sunday night, following Shukla’s murder, he had summoned state police chief Virendra and home secretary HK Dwivedi. But till Monday morning, there was allegedly no response from the government, prompting the Governor to tweet, “Alarming nosediving law and order scenario @MamataOfficial. Targeted political killings in spite of alert by constitutional head. Neither ACS Home or DGP @WBPolice responded. To CM at 10.47 PM ‘Would like to speak to you urgently!’ Only silence speaks volumes.”

In the afternoon, Bandyopadhyay made his way to Raj Bhavan to meet the Governor. “Conveyed my concern of the present alarming scenario @MamataOfficial to the new Chief Secretary. I am sure the Chief Minister will be indicated all these critical aspects that run down democratic governance and lawlessness. Political violence and targeted killings must stop,” Dhankhar tweeted.

Later in the day, the Governor lashed out at the state police for saying that all angles, including personal enmity, were being investigated since the victim was an accused in some murder and attempt to murder cases. Dhankhar alleged that the police were distancing themselves from a fair investigation.

“Criminal jurisprudence principles thoroughly sacrificed @WBPolice @MamataOfficial. An all out effort to cover up and fishing for alibis. The manner of this dastardly act calls for focus on all angles including terror. West Bengal police far distanced from fair investigation,” he tweeted.

Meanwhile, sources said that Vijayvargiya complained to the Governor about NRS Medical College’s delay in handing over Shukla’s body to his family members and party workers.

After meeting the BJP delegation and the victim’s family, Dhankhar tweeted: “Tearful Chandra Mani Shukla, father of 39 year only son Manish, pleaded for fair investigation. Slain Manish, an advocate, had multiple bullet injuries in head. According to the delegation, it is a targeted political killing as hatched conspiracy and calls for an independent expert probe.”