A popular measure seen in the city is 'Sanchigondu' (which translates to 'one for the box'), a concept which allows customers to buy meal tokens for boxes kept at restaurants while paying for their own meals, which can be later redeemed by people in need. 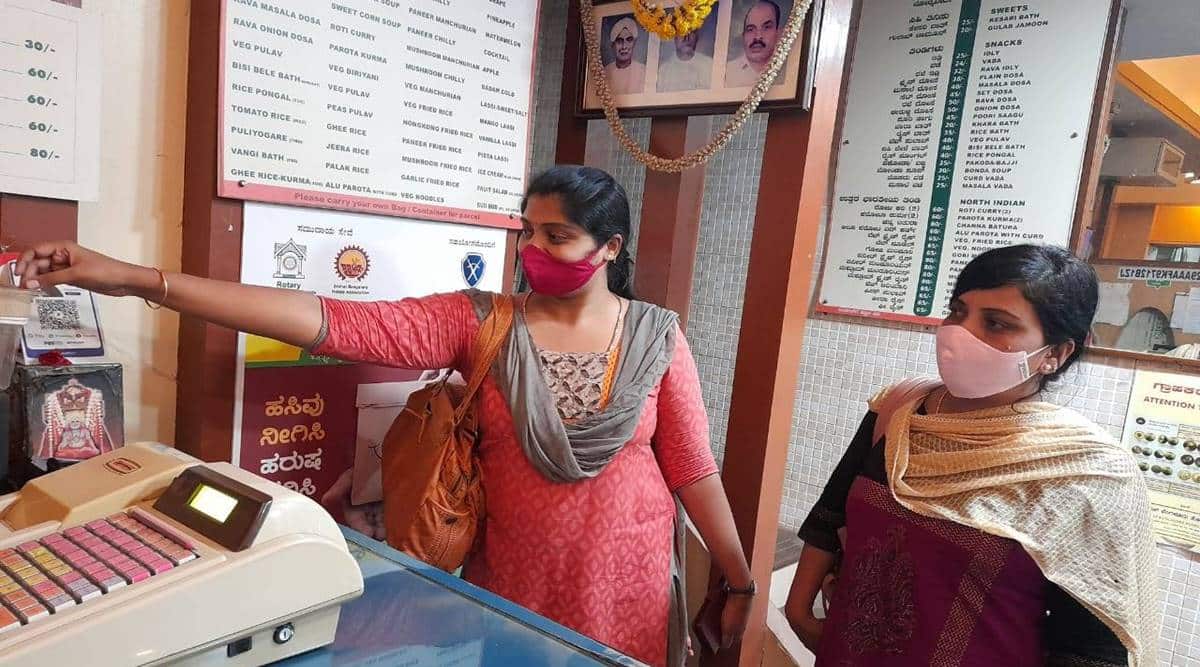 As more restrictions put in place to contain the coronavirus pandemic have been eased, several volunteering groups in Bengaluru, which had come together to help the needy during the complete lockdown days, have taken a step further to continue offering assistance to those in need.

A popular measure seen in the city is ‘Sanchigondu’ (which translates to ‘one for the box’), a concept which allows customers to buy meal tokens for boxes kept at restaurants while paying for their own meals, which can be later redeemed by people in need.

The initiative — jointly implemented by Bruhat Bengaluru Hotels Association (BBHA), Rotary Club (Bangalore South Parade), and Corona Warriors Banashankari — has seen nearly a 1,000 takers in the first week since it was launched on October 2, the organising team said. Speaking to Indianexpress.com, Arun Adiga, owner of the city’s iconic Vidyarthi Bhavan in Basavangudi, said that around 250 meals were served in a week’s time to the homeless and economically strained in the surrounding areas. “The items are decided based on what is famous in each hotel. It may be dosa at a place or a rice item at another. With the number of dine-in patrons seeing a gradual uptick, people are noticing the ‘Sanchigondu’ boards and are happy to help,” he said.

Meanwhile, as per the hotels association in the city, over 70 restaurants are active participants in the novel initiative, with a majority of them serving South Indian dishes exclusively. “The concept has found traction with many of our members and we have spread the word amongst ourselves. We humbly feel obliged to give back to the society that has supported our businesses at all times,” P C Rao, BBHA President said.

While there are two kinds of tokens available, customers can choose either tea/ coffee or for meals. “While we are generating awareness among prospective beneficiaries of the initiative as well by various means now, those in need can ask for Sanchigondu meals at the counter,” Adiga explained. With all participating hotels displaying boards in Kannada and English announcing the same, organisers believe that the initiative will gain more traction, both among donors and recipients, in the coming days. Elaborating on the thought behind the initiative, Ravi Prasad, Secretary of Rotary Club (Bangalore South Parade), remembered how a team of volunteers, including him, were extensively involved in food distribution for the needy during the lockdown. “At the end of the day then, our team used to meet together to share stories after stories of the existing hunger problems in the city,” he said. He added that people who were hungry would run next to their cars identifying them carrying food. “From such gut-wrenching incidents, we saw what hunger was from close quarters.”

“This is when the team member happened to see a video narrated by Dr Gururaj Karjagi (Rajyotsava awardee and President, Centre for Creative Teaching) explaining a concept named ‘One for Me and One for the Wall’ which he saw at an American college canteen. This coincided with our thoughts seeking a solution for hunger mitigation and hence Sanchigondu was born,” Yathiraj, a member of the Corona Warriors Banashankari team said. The team behind the initiative is hopeful of achieving a pan-Bengaluru expansion soon to take the benefits across the city. “Each hotel has its own customers and an area of influence. With more participating restaurants, more people would get served,” Yathiraj added, explaining how several gaps on the map are now identified and are filled up on a daily basis.

Further, volunteers have also started identifying orphanages and slums in the city to ensure surplus meals received from the initiative are distributed to the needy on a weekly basis, thereby expanding their social outreach.