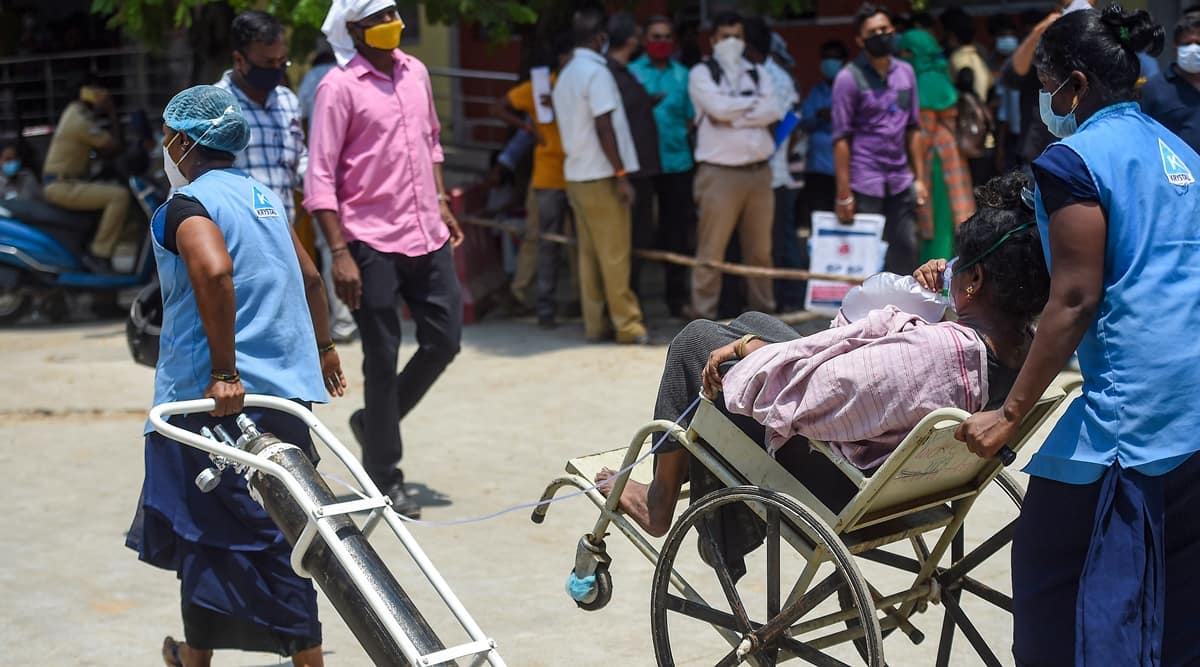 Chennai, Hyderabad Coronavirus News Live Updates: Tamil Nadu recorded 17,897 positive cases of COVID-19 on Thursday, bringing the state tally to 11,48,064. Among these, Chennai reported 5445 positive cases, bringing the city’s total to 3,28,520. The state recorded 107 deaths on Thursday, putting the state toll at 13,933. Eighty eight of them had succumbed due to comorbidities. A total of 15,542 patients were discharged following treatment, taking the total number of recoveries to 10,21,575.

Tamil Nadu Chief Secretary Rajeev Ranjan Thursday chaired a meeting with the district collectors, health secretary, City Commissioner, DGP, Chennai Corporation Commissioner, senior healthcare personnel and other officials to discuss further course of action to curb the spread of COVID-19 cases in districts that have a higher percentage of positive cases. According to sources, districts like Chennai, Chengalpet, Tiruvallur, Kancheepuram, Ranipet, etc., which had been reporting more positive cases are likely to face further restrictions to break the chain.

Catch the latest news in Chennai and Hyderabad as we bring you live updates on COVID-19 vaccination, COVID-19, lockdown 6.0 and phase 6 of the unlock across Tamil Nadu, Andhra Pradesh and Telangana and more through the day. Also read Karnataka Bengaluru news

Former AIADMK Minister C Aranganayagam, who had the unique distinction of serving in the cabinets of former chief ministers M G Ramachandran and J Jayalalithaa, died following age-related illness at a city hospital in Chennau on Thursday. He was 90.

Aranganayagam was elected to the Tamil Nadu Legislative Assembly on four occasions – twice from Thondamuthur constituency and two times from Coimbatore West constituency. He had held the education portfolio.

“He was among those (leaders) who directly interacted with late chief ministers M G Ramachandran and J Jayalalithaa. He had held several key positions in the party including headquarters secretary,” said AIADMK coordinator and deputy chief minister O Panneerselvam and co-coordinator and chief minister K Palaniswami in a joint statement in Chennai.

Expressing grief over his death due to age-related illness at a hospital here, the two leaders conveyed their condolences to the bereaved family. (PTI)

Tamil director-cinematographer KV Anand passed away on Friday in Chennai following a heart attack. He was 54.

The Madras High Court on Thursday pulled up the Centre over its alleged lapse in taking prompt action in containing the Covid-19 pandemic, wondering what it was doing for 14 months.

Chief Justice Sanjeeb Banerjee said there was a need to act on expert advice and not adhocism.

“Why are we acting only now in April, though we had one full year?” the CJ asked, when Additional Solicitor General R Sankaranarayanan told the court that the resurgence of the second wave of the virus was ‘unexpected’.

A total of 40 passengers who had returned to Tamil Nadu from UK and 20 of their primary contacts have tested positive for COVID-19 till date.

Among the 40 primary cases, nine cases were reported in Chennai, three each in Thanjavur and Nilgiris, five each in Madurai and Chengalpattu, eight in Trichy, two in Karur and one each in Theni, Nagapattinam, Coimbatore, Virudhunagar and Sivagangai. Among the 20 contact cases, six were reported in Chennai, three in Thanjavur, two each in Nilgiris and Theni, four in Chengalpattu and three in Nagapattinam.

A total of 2300 passengers had travelled to Tamil Nadu from UK between November 25 and December 23, of which 2146 were tested. Among these, 24 had tested positive, 2122 tested negative and 3977 close contacts of the 2122 passengers who had tested negative were also tested for COVID-19 and were found to be negative.

A total of 4476 passengers had travelled to Tamil Nadu from UK between January 8 and April 29, of which 3969 have been tested. Among these, 16 have tested positive, 3945 have tested negative and the results of eight passengers are awaited. Tracing of further passengers is underway.

Tamil Nadu recorded 17,897 positive cases of COVID-19 on Thursday, bringing the state tally to 11,48,064. Among these, Chennai reported 5445 positive cases, bringing the city’s total to 3,28,520. The state recorded 107 deaths on Thursday, putting the state toll at 13,933. Eighty eight of them had succumbed due to comorbidities. A total of 15,542 patients were discharged following treatment, taking the total number of recoveries to 10,21,575.

According to a bulletin released by the Health and Family Welfare Department of Tamil Nadu, 2,25,18,836 samples from the state have been tested till date, with 1,40,589 samples having been sent yesterday. There are 265 COVID-19 testing facilities in the state, out of which 69 are government and 196 are private facilities.

Good morning!
Welcome to the live blog from Chennai and Hyderabad where we bring to you the latest updates on COVID-19 vaccination, COVID-19 in Tamil Nadu, Andhra Pradesh and Telangana, politics, civic issues and more across Chennai and Hyderabad throughout the day. Follow the blog to stay up to date with the states in real time. Protestors raise slogans in front of the collector’s office.

Family members of those killed in the Thoothukudi police firing in May 2018 submitted a petition to the District Collector Thursday stating that the Vedanta-owned Sterlite copper plant should not be allowed to reopen to manufacture oxygen. Holding photographs of the deceased, protesters raised slogans outside the collector’s office against the Supreme Court’s decision allowing the operation of oxygen production units at the Sterlite copper plant.

For assistance on COVID-19-related queries and mental health support in Chennai, citizens can contact the Greater Chennai Corporation’s (GCC) COVID-19 helpline 044 46122300 | Citizens can find the nearest GCC-facilitated COVID-19 fever clinic here | For lodging rain-related complaints and assistance during the monsoon, citizens can contact the GCC’s monsoon helplines 044 25384530 or 044 25384540 or the control room 1913 (available 24×7)