The National Green Tribunal had, last month, ordered the Goa government to hold fresh public hearings after the Goa Foundation had moved the NGT against the alleged deficiencies in the conduct of public hearings held by the state government on March 7. 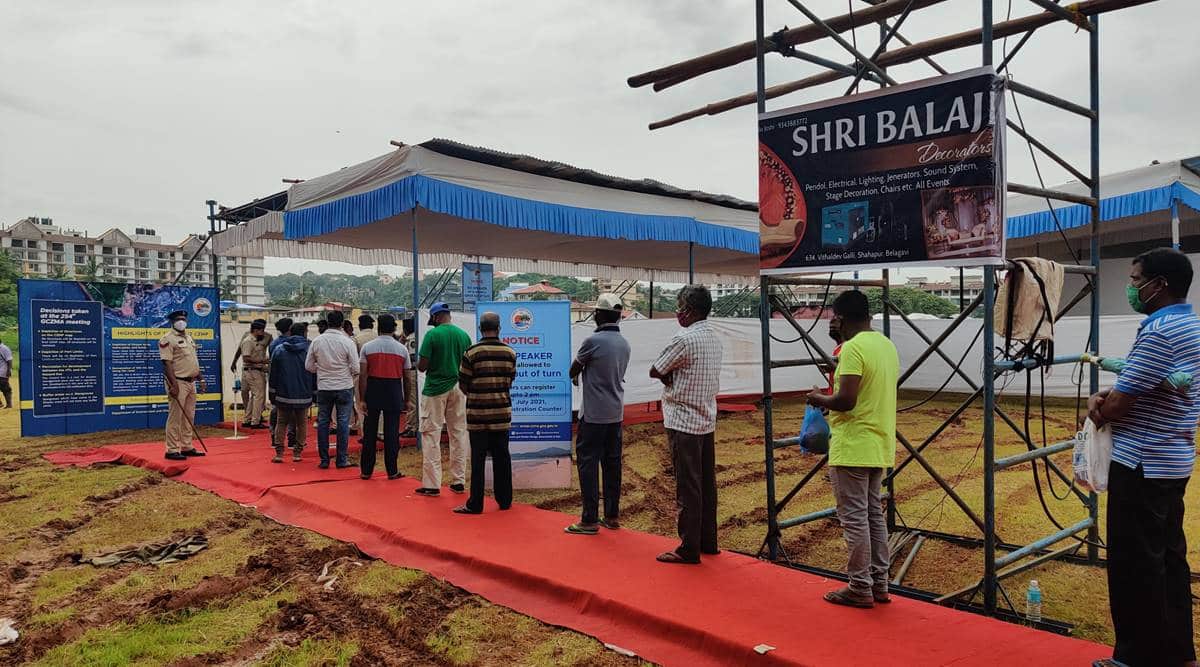 Hundreds gathered in Panaji and Margao on Thursday to participate in the public hearing organised by the Goa government pertaining to the preparation of the state’s Coastal Zone Management Plan (CZMP). The hearing that began at the two venues in North and South Goa respectively continued during the late hours of Thursday and was expected to spill over into the early hours of Friday, government officials said.

The National Green Tribunal had, last month, ordered the Goa government to hold fresh public hearings after the Goa Foundation had moved the NGT against the alleged deficiencies in the conduct of public hearings held by the state government on March 7. The NGT gave the state time till August 31 to finalise the plan.

The draft Coastal Zone Management Plan (CZMP) prepared by the National Centre for Sustainable Coastal Management (NCSCM), Chennai – an agency approved by the Centre – had stoked controversy in Goa in February-March after the draft was met with criticism from locals, environmentalists and political parties. In Goa, with a 105 km coastline, discontent had brewed over a number of issues including the duration to respond to the draft, re-zoning of beach areas and accommodating allegedly illegal constructions.

On Thursday, the public hearing started at 10 am at the Campal Ground in the capital and the SGPDA ground at Margao in covered pandals with chairs for over 500 participants, amid heavy police deployment.

Residents of the state’s coastal villages, environmentalists, fisherfolk, students, owners of businesses and politicians from the opposition all participated in the hearing on Thursday. Activists and politicians later lashed out at the government for holding a “farcical hearing” amid a pandemic while a curfew was still in place in Goa.

Former chief minister and leader of opposition in the Goa legislative assembly Digambar Kamat, who had registered to participate in the hearing at Margao, said that he was allotted the number 954 to speak and said that the government should have adjourned the hearing at 6 pm and it should have been continued on Friday.

“There are 625 speakers registered online, after spot registration, I was given number 954. How will people express themselves? Each one is given only 15 minutes, then they are rushed, they are told that they are repeating. An effort is being made to rush everything. This plan is going to have a long-standing effect on the state of Goa. The best thing would have been for them (government authorities) to go to the villages, discuss with panchayats, them into confidence. That was our demand,” Kamat said.

In Panaji, 131 speakers had registered for the public hearing, North Goa Collector Ajit Roy said. He said on Thursday evening that the hearing was expected to be completed by 2 am on Friday. The minutes of the meeting would then be read out which would take up to 45 minutes more, government officials said.

Goa Foundation director Claude Alvares said, “We did not attend the hearing because we are still in a pandemic situation and we had to take care of our health. We have submitted a 500-page document Goa Pollution Control Board with our views in it. This time (unlike in March) the way the hearing was held was a bit better because at least people were not deprived of participating in the hearing but the best way would have been to hold it in a staggered manner. To hold a hearing at night, asking people to gather in large numbers is illogical and ill-advised.” He said, “This completely defeats the purpose of a public hearing with people asked to come during a curfew and late at night. But we are also tired of running from one court to another every time,” said Alvares.

Goa Forward Party president Vijai Sardesai said that the Goa government was trying to “quickly approve the CZMP draft prepared by an agency that will only help the coal and Delhi lobby.” Sardesai said, “The government must accept the drafts submitted by the local bodies first, and only then should a public hearing be conducted. Goan issues need Goan solutions, and our local people have the right solutions and ideas for the affected areas.”