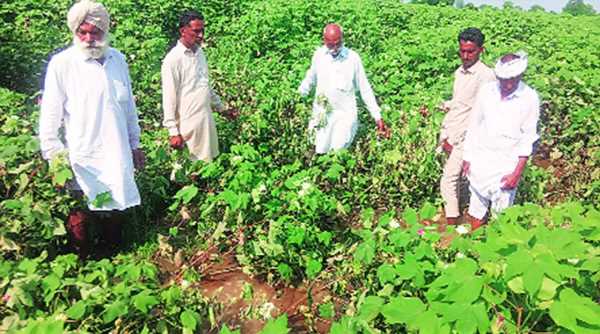 Amid major damage to the cotton crop due to pink bollworm attack, Punjab Wednesday reported two alleged deaths by suicide – of a farmer and a farm labourer – both from Talwandi Sabo in Bathinda.

While Jaspal Singh Bhola, a farmer from village Chathewala, allegedly committed suicide Wednesday morning over crop loss due to the pest attack, farm labourer Mohinder Singh was found hanging from a tree in the common area of his native village Jaga Ram Teerath on Tuesday morning.

Bhola, 48, had grown cotton in his four-acre farm. The entire crop is under pink bollworm attack, his son Navpreet Singh said.

“We have loan liabilities worth Rs 15 lakh and the bank had issued kurki (attachment) notice for land worth Rs 10 lakh. My father hanged himself in afternoon when no one was at home. He had been upset over the damaged cotton crop,” Navpreet said, adding his father also had stomach cancer.

Earlier, 42-year-old Mohinder Singh was found hanging from a tree in the common area of the village Jaga Ram Teerath on Tuesday morning. According to his wife Kulwant Kaur, Mohinder Singh owed a debt of around Rs 2 lakh. She said that since the season’s cotton crop was under pest attack, the family had not been hired for any work like cotton picking. This increased their financial woes.

Mohinder is survived by his mother, wife, two daughters and a son.

Joginder Singh Jagga, a zila parishad member and a resident of the village said, “The government must provide compensation to the family as per norms.”

Gurdeep Singh, a panchayat member added, “Farm labourers are in distress over the spread of pink bollworm attack on cotton crop. They too need to be compensated apart from farmers”.

on Sunday, Chief Minister Charanjit Singh Channi had announced that every cotton cultivator who has suffered losses due to the attack of pink bollworm will be compensated by the government. Prior to that, Deputy Chief Ministers Sukhjinder Singh Randhawa and O P Soni last week on had ordered a special ‘girdawri’ to assess the damage to cotton crop due to the pest attack.

It may be noted that the government awards a compensation of Rs 12,000 per acre.

Meanwhile, Farmers in Mansa complained that they have not yet received any relief for the loss to the crop due to hailstorm in 2019. The affected villages were Tandian, Bajewala, Bhamme Kalan and few others. The farmers claimed that some villages in Bathinda received the compensation but Mansa farmers are yet to be compensated despite multiple reminders to the administration. Gurlabh Singh Mahal, an advocate and a farmer, said, “How can we trust the officials now when they haven’t compensated farmers for the past two years?”