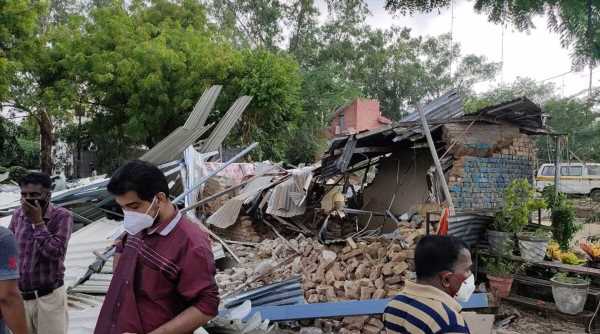 Kejriwal says DDA did it, authority says had nothing to do with the demolition. The demolition of a church in South Delhi’s Chhatarpur on Monday snowballed into a political row with Delhi Chief Minister Arvind Kejriwal, who was in Goa Wednesday, saying he was told the action was ordered by the Delhi Development Authority, which comes under the Centre. The DDA, though, denied having anything to do with the demolition.

Kerala Chief Minister Pinarayi Vijayan, who was in Delhi, had called the demolition “shocking”.

The Little Flower Syro Malabar Church was located in Dr Ambedkar Colony near Andheria Mod in Chhatarpur, and was operating from a temporary structure, said Father Jose, the parish priest.

Speaking at the Panjim Convention Centre, Kejriwal said: “I am told, firstly, it was done by DDA. DDA comes under the central government. Delhi government has no control over it. DDA perhaps went to the High Court. High Court gave an order and DDA has taken that action. Our local MLAs are involved with the church. Our Chhatarpur MLA Tanwarji is with them, with the church. We will provide whatever help they need.”

In the capital Pinarayi had said Tuesday: “Churches are used as places of worship and a tense situation should not have happened at such a place of worship. The Kerala government has limitations in intervening in the issue. However, the government would explore what can be done.”

Senior DDA officials denied that the demolition was carried out by them or on their recommendation. “Our team has not taken any such action,” a senior official said.

The show cause notice to the “encroachers” was issued by the Block Development Officer, South Delhi district, which comes under the Delhi government’s revenue department.

The notice, dated July 7, said that an encroachment on gram sabha land was observed by the area Panchayat Secretary. Gram sabha land, the notice said, is meant for public utility and has not been allotted to anybody. It gave the occupants three days to remove the structure, failing which action will be taken.

The notice also said that they had received a letter from the Home Police-II Department, GNCT of Delhi, dated March 3, which referred to a 2015 High Court interim order on demolishing encroachments.

Father Jose alleged that the demolition was carried out without giving them any information. “There was no discussion, they came without any prior information. I was here when it happened. Everything has been demolished, statues broken, instruments used for prayers, church records, sound systems have all been damaged. The altar is still there but we cannot use it anymore. It was not even a concrete structure, only a temporary shed. It existed for 14-15 years,” he said.

“There is another church, a masjid and a temple nearby, they are all unharmed,” he said.

Ankita Chakravarti, the South Delhi District Magistrate, had also said in an official statement earlier that the demolition exercise was carried out after receiving a letter from the Home Police-II Department, where they cited a High Court order from 2015 on demolishing encroachments.

“The encroachers approached NHRC from where the matter was transferred to the religious committee. Thereafter, a letter was received from the Home Police-II Department dated 03/03/2021 where they cited the HC order of 2015… wherein it was directed to demolish the entire construction above the ground floor as well as portions of the ground where idols are not installed/placed without waiting for the decision of the Religious Committee,” she said.

“The notices were duly served to the encroachers and finally the demolition was successfully carried out,” she said.